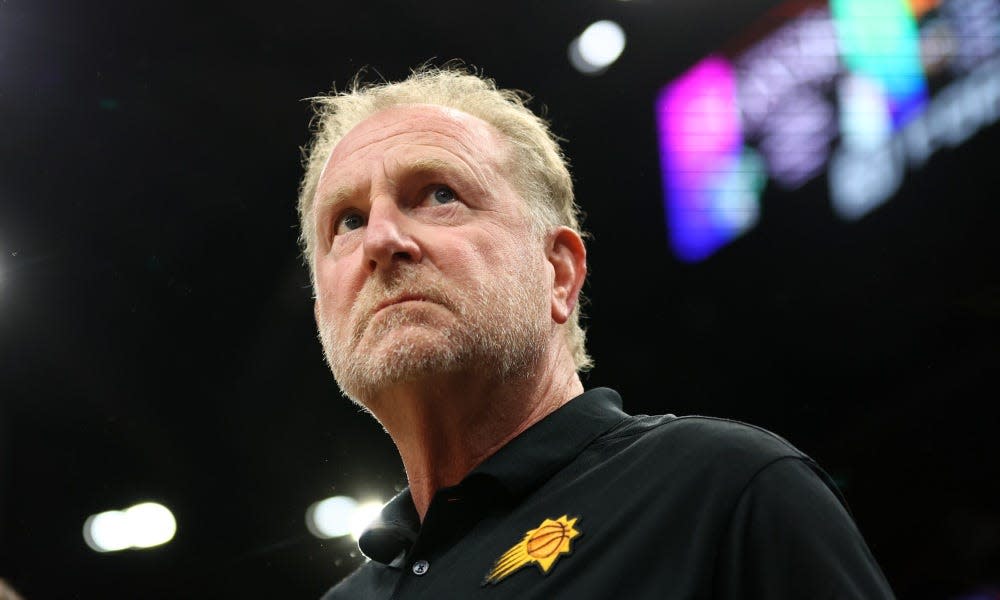 Welcome to Layup Lines, our daily NBA newsletter where we’ll prep you for a tip-off of tonight’s action, from what to watch to bets to make.

On April 29, 2014, the NBA issued a lifetime ban of former Los Angeles Clippers governor Donald Sterling for racist comments he made that were caught on an audio recording. The ban precipitated his eventual forced sale of the Clippers, which required a three-quarters majority vote by the other team owners.

On the recording, Sterling was upset with girlfriend V. Stiviano for sharing a photo of herself with Magic Johnson on Instagram, urging that she not post photos with Black people. Eight years later, his punishment was thought to set a precedent for how the NBA would handle Phoenix Suns governor Robert Sarver, who was accused in reports last year of creating a hostile work environment through racism, misogyny and harsh treatment of employees over his 17-year tenure.

Instead, what happened Tuesday fell well short of those expectations. The NBA announced that Sarver was being suspended for just one year and fined $10 million. Commissioner Adam Silver said Sarver’s racist comments were “beyond the pale” but “wholly of a different kind,” whatever that means. Fans were displeased, believing another ousting was in order.

Personally, I’m not as concerned about whether or not they removed him as owner. I do think the precedent was there to do so, but a forced sale is hardly punishment when it nets him upward of a billion dollars. I do, however, believe a one-year ban was extremely too lenient.

The NBA’s investigation found that Sarver “clearly violated” workplace standards. He used a racist slur at least five times, and there were instances of inequitable conduct toward female employees. As isolated incidents go, his transgressions were actually worse than Sterling’s because they happened at the actual workplace, involving people he employees.

Of course, anyone who’s read about Sterling’s past transgressions knows they run deeper than just the comments about Johnson. And the audio recording likely made a legal battle more possible to win. But even if the league didn’t feel it could win in court against Sarver, why didn’t it issue a similar lifetime ban? How did it land on a ban that allows someone who displayed such foul behavior to return after just a year?

This was a rare miss for the NBA.

Some NBA goodness from around the USA TODAY Sports network.

Have you been paying attention to EuroBasket 2022? If not, you’re missing out some good hoops, and the latest player to impress is Germany’s Franz Wagner.

An NBA All-Rookie first-teamer for the Orlando Magic last season, Wagner helped Germany eliminate Greece on Tuesday to advance to the semifinals. He finished with 19 points and made the highlight of the game, this super impressive step-back 3-pointer over Giannis Antetokounmpo.

My colleague Bryan Kalbrosky couldn’t help but wonder how Wagner’s ever-evolving skillset will mesh with the top pick of this year’s draft, Paolo Banchero.

“This excellent performance was nothing new for Wagner, who scored 32 points against Lithuania on Sept. 4. He was 4-for-7 from beyond the arc.

I was most impressed with Wagner against Sweden during the FIBA World Cup European Qualifiers on August 25. He recorded 16 points but added 5 assists, 5 rebounds, 2 blocks, and 2 steals. It was the perfect display of his utility.

Wagner is finishing a large share of his offensive possessions as the ball-handler in pick and roll sets, per Synergy. Only two players have been more efficient when shooting off the bounce. Combine that skill set with rookie teammate Paolo Banchero, and the Magic may have the best blend of height and creation skills of any young frontcourt in the NBA.”

— A poll of NBA execs has Luka Doncic as the top player in the NBA to build around. Here’s more from HoopsHype.

— Kawhi Leonard is working on a hip-hop album, and now we want to know more.

— Devin Booker missed a shot on stage at a Jack Harlow concert, and it was hilarious.