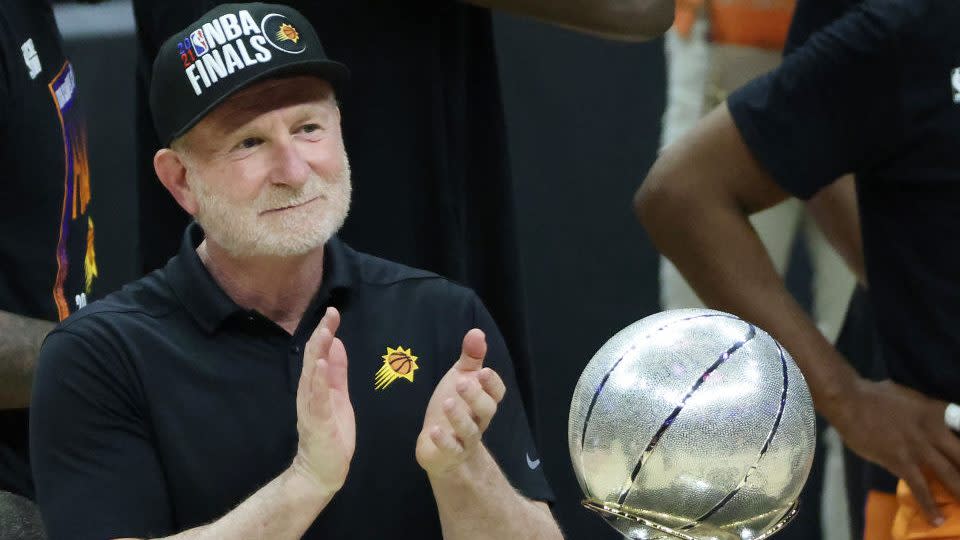 In 2004, Suns owner Robert Sarver used the N-word during a meeting to recruit a free agent player. In 2021, Sarver talked about learning what a “blow job” was during a Suns’ business meeting.

For the 17 years in between, Sarver was a bully who oversaw a Suns organization with racist and misogynistic overtones, all detailed in an NBA-sponsored investigation and report on the franchise by the law firm of Wachtell, Lipton, Rosen & Katz. The report found more than 100 employees who said Sarver “violated applicable standards” of business conduct, but that legalese sells short what employees were dealing with. For example, he “told a pregnant employee that she would be unable to do her job upon becoming a mother,” he “made a comment to a female employee about his genitalia” (that happened more than once), Sarver used the N-word at least five times, he swore often, and “over 50 current and former employees reported that Sarver frequently engaged in demeaning and harsh treatment of employees.”

All that is just the tip of a very disturbing iceberg in a 36-page report. Nearly every detailed incident was something that would get nearly everybody reading this fired on the spot.

Yet Sarver is still going to be the owner of the Phoenix Suns a year from now.

Sarver was suspended by the NBA for a year and fined $10 million — with that money being directed to organizations focused on racial and gender-based issues in and out of the workplace — but he will not lose control of the team.

The most shocking part report was this paragraph:

“Taking the evidence in totality, including witness testimony and documents reviewed by investigators, the investigation makes no finding that Sarver’s conduct was motivated by racial or gender-based animus.”

Are they kidding? How could nearly two decades of this consistent behavior not be motivated by racial or gender-based animus? Just because Sarver doesn’t recognize it as animus doesn’t make it any less real.

The NBA chose to take it easy on Sarver. The punishments should have been more severe, maybe up to losing the team.

Why wasn’t Sarver forced to sell his team the way Donald Sterling was with the Clippers eight years ago? Why did Sarver get basically the same punishment the Mavericks got for troubling issues on their business side, but ones not linked to owner Mark Cuban and not stretching anywhere near decades?

In Sterling’s case there was audio (leaked by his mistress to TMZ) — actually hearing the vile, racist comments from Sterling himself made it more visceral. There is no audio or video of Sarver, no smoking gun of the same degree, despite the volume of complaints in the report.

Those Sterling tapes also came out during the playoffs, leading to strong reactions from players — including almost boycotting a game — and a very public show against the then Clippers owner.

Numerous NBA sponsors — State Farm, Carmax, Kia, Red Bull, and many others — also pulled away from the Clippers and the league after the Sterling tapes came out. The second the scandal hit the league’s bottom line, Adam Silver acted quickly and decisively.

The Sarver scandal dropped in the deadest part of the NBA offseason and has not seen the same level of player involvement and public anger as the Sterling case. There has not been a sponsor backlash. Sarver also “took responsibility” for his actions, which was not a genuine apology but was more contrite than Sterling.

Also don’t forget NBA Commissioner Adam Silver works for — and at the pleasure of — the NBA owners. Plenty of them live in glass houses and don’t want to start throwing stones.

What the NBA needs to do now is find a way to keep this from happening at other NBA (and WNBA) franchises. Silver sent a memo to teams in the wake of the Mavericks scandal telling them to clean up their own houses, but that didn’t happen everywhere, as evidenced by this report.

If the NBA is going to champion its progressive policies and credentials, it has to start living up to them within teams. It can’t simply be words.

What can be done? Sam Amick at The Athletic wisely suggests the NBA find a way for team employees to make a complaint to them about working conditions/situations and have them investigated, rather than going to team human resources. In Phoenix, people didn’t come forward because they feared reprisals from HR, which was seen as an extension of Sarver’s will and not something there to protect the workers. It may be that way with other teams, so set up an outlet.

There may be other steps as well. The owners may not want more league oversight of their business, but if they can’t police themselves than the NBA has no choice. Not that the NBA itself is blameless here — both the Sarver and Sterling situations went on for decades before there was action. That is not acceptable.

The league has to do more.

It fined and suspended Sarver, but did not take the steps that would put the fear of god (or Adam Silver) in other owners. That was but a first step.

It’s time for the NBA to live up to its words and ideals.

Here is more on the Suns

Suns’ owner Sarver suspended from NBA/WNBA for one year, fined $10… GM Jones says there was ‘not much discussion’ of Suns trading… Report: Suns, Lakers, Mavericks, Knicks all interested in Bojan Bogdanovic…

NBA takes it too easy on Sarver, shouldn’t to prevent this from happening again originally appeared on NBCSports.com