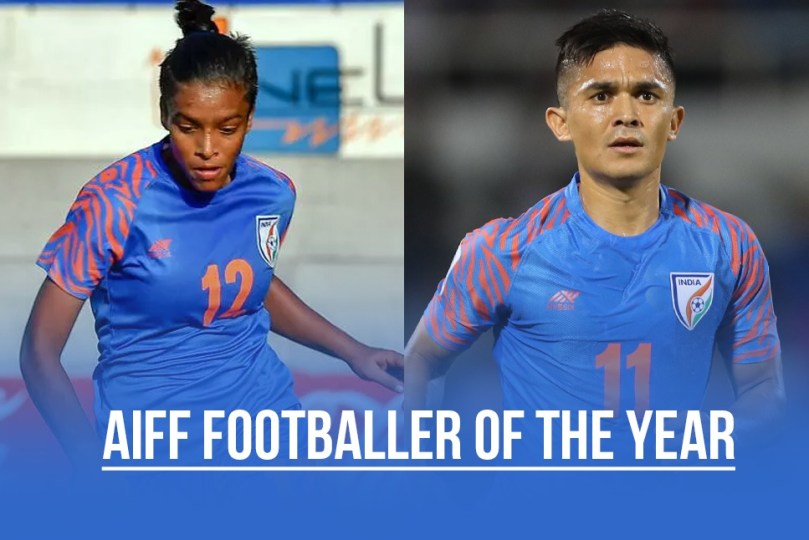 The two stalwarts were nominated as winners by their respective National Team coaches Thomas Dennerby, and Igor Stimac. While Manisha had won the Women’s Emerging Footballer of the Year for last season, while this is the seventh time that Sunil won the Award, having last won it in 2018-19.

“Manisha has come up with some outstanding performances for the National Team, and also her club. She has scored goals, and also n assisted on a regular basis. Blessed with excellent speed and being a good dribbler, she has the potential to play in bigger leagues in the future. She is young, and still developing but has been our best player,” Women’s national team head coach Thomas Dennerby averred.

Manisha recently signed a multi-year contract for Cypriot champions Apollon Ladies. The club, who were the winners of the 2020-21 Cypriot top division, have earned a place in the qualifying rounds of the 2022-23 UEFA Women’s Champions League.

Speaking about Sunil, Men’s national team head coach Igor Stimac explained, “Sunil was our highest goal-scorer, scoring 5 goals, and also the Player of the Tournament in the SAFF Cup. Furthermore, he led from the front scoring 4 goals in 3 games in the 3rd round of AFC Asian Cup qualifiers in Kolkata. His commitment, leadership, discipline and hard work were impressive throughout bad, and good times.”

“Martina is just 17 years old. She is a very strategic midfielder with an exceptional vision of the game,” Dennerby stated. “She has already earned her first India cap for the senior team, and has been quite regular since then. She also put up a stellar performance for the Indian Arrows in the IWL,” added the coach.

Speaking about Vikram, Stimac mentioned that “He contributed to his club success last season with 22 appearances and 3 goals in the ISL, and also the AFC Champions League. He also played a crucial role in our India’s campaign in the AFC U23 qualifiers for the Asian Cup scoring 1 goal.”