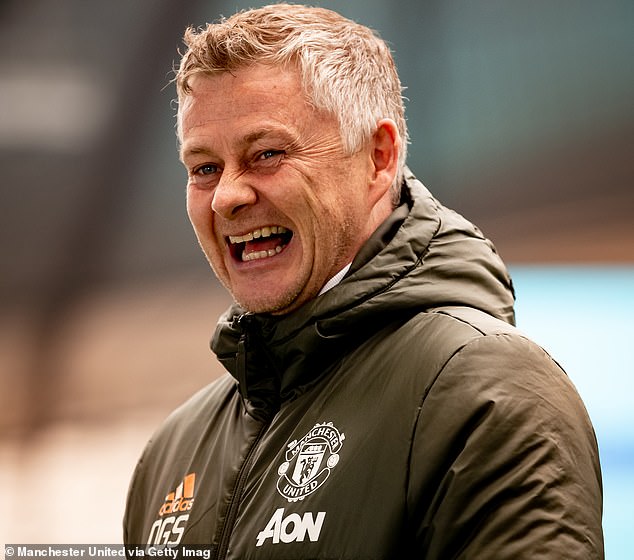 Ole Gunnar Solskjaer faced a lot of criticism during his tenure as manager of Manchester United.

The Norwegian was sacked in November after a poor start to the season which included heavy defeats by Liverpool and Watford, as well as a 2-0 defeat by Manchester City, in which they were outclassed from start to finish.

There has rarely ever felt such a massive gulf in quality between the sides ahead of this weekend’s Manchester derby, with City favourites to win their fourth title under Pep Guardiola, while United merely hope to finish inside the top four. 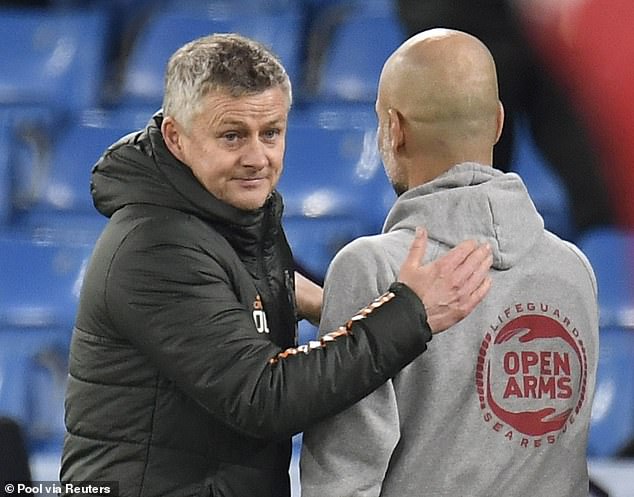 Though United have fallen a long way off City since Guardiola was appointed as manager in 2016, Solskjaer held a 100 per cent record at the Etihad as manager of the Red Devils.

By beating City 2-0 in March 2021, he became the first manager to ever win three successive away games against a Guardiola side.

His record in general was very impressive against the Spaniard with four wins, four defeats and a draw – better than most managers would be able to say against the force of City.

He has provided the blueprint of how teams can get the better of the current champions.

Sportsmail takes a look at what Rangnick can learn from the Norwegian, going into his first Manchester derby at the Etihad on Sunday. 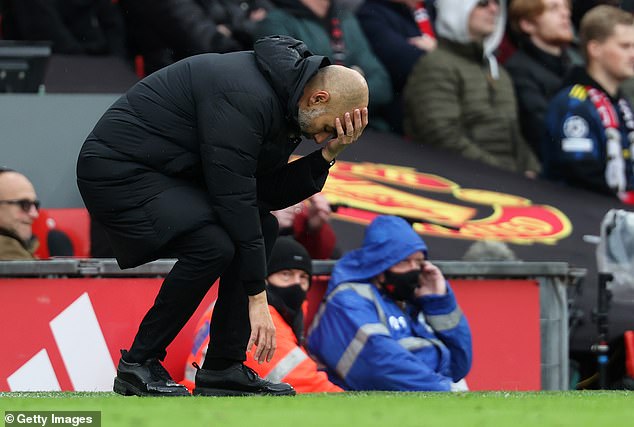 Despite their success, Guardiola was left frustrated at the Etihad when Solskjaer was in charge 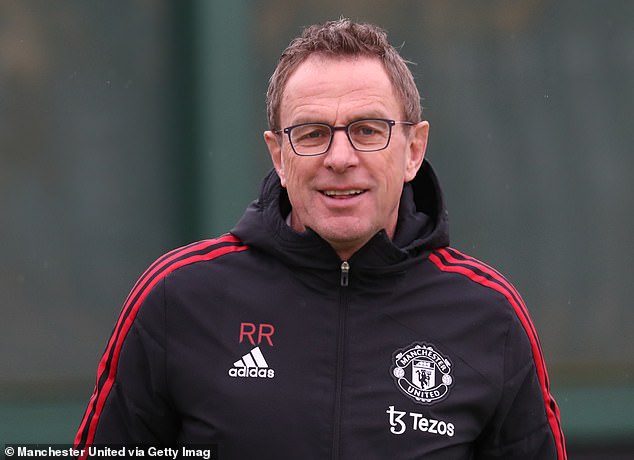 The most obvious problem that any team faces coming to the Etihad, is that City are almost certain to see more of the ball than you will.

Their possession based game can suffocate teams who more often that not submit to the constant pressure that they are put under.

But once a team has accepted this, an effective game plan can be found to get the better of City. 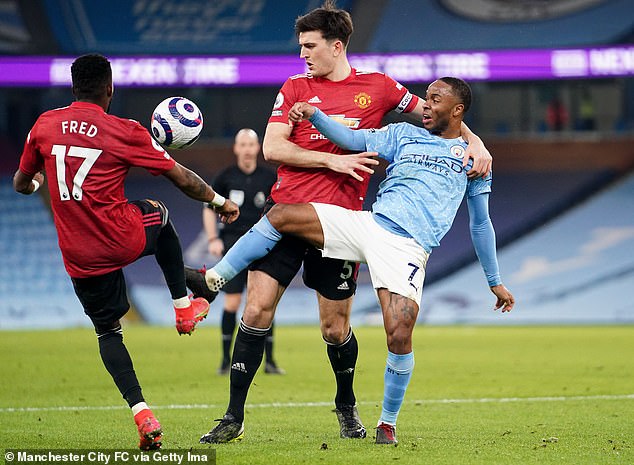 Solskjaer only beat City once at Old Trafford, but that 2-0 victory in March 2020 saw the Red Devils have just 27 per cent possession.

United did this by being effective at both ends of the field.

Their back four and midfield which has often been criticised this season need to show organisation, discipline and work-rate to match City’s relentless pressure and give them a chance to snatch a goal at the other end. 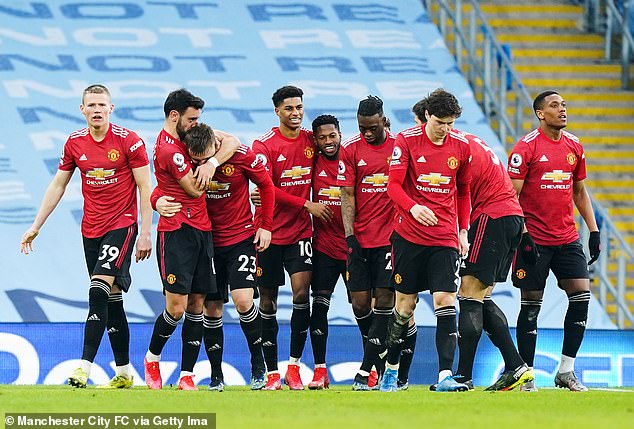 The longer City get frustrated and are held without a goal, the more likely spaces will open up.

United are not in a place where they can have greater control against Manchester City and haven’t been for a number of seasons.

But what they have been blessed with is forwards of blistering speed who have provided incision on the counter attack. 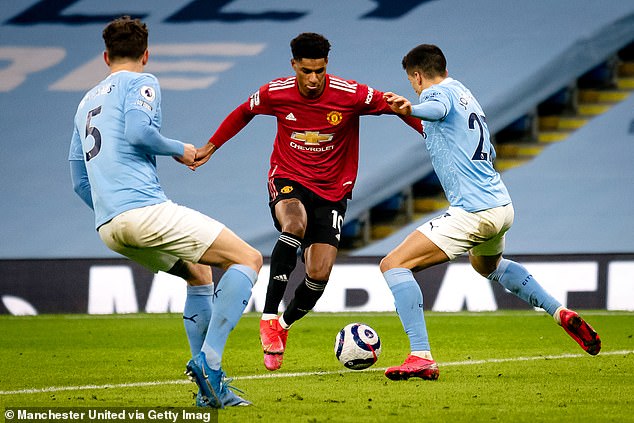 At the Etihad last season, they used this to their advantage with Marcus Rashford and Dan James making the line-up with Anthony Martial ahead of them.

All three had the pace to trouble City’s back line and so it proved. Rashford and Martial combined before the latter was fouled in the box allowing Bruno Fernandes to open the score with a penalty.

Then, it was a blistering counter attack with Luke Shaw bursting forward, playing a one-two with Rashford and firing home.

Rashford, James and Martial were again  effective when United won at the Etihad in December 2019, with both Rashford and Martial on target. 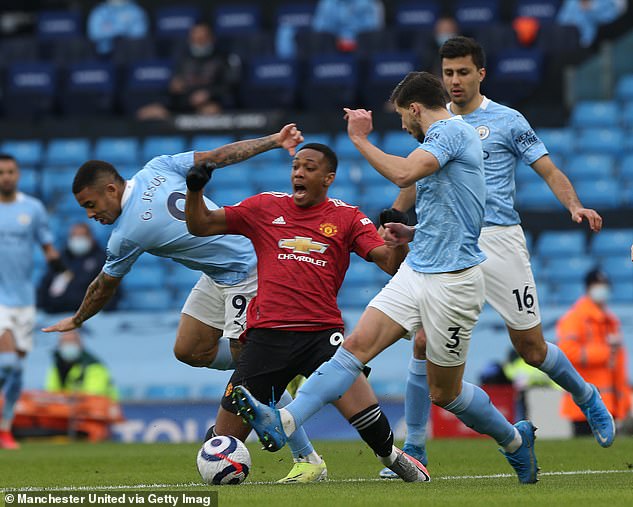 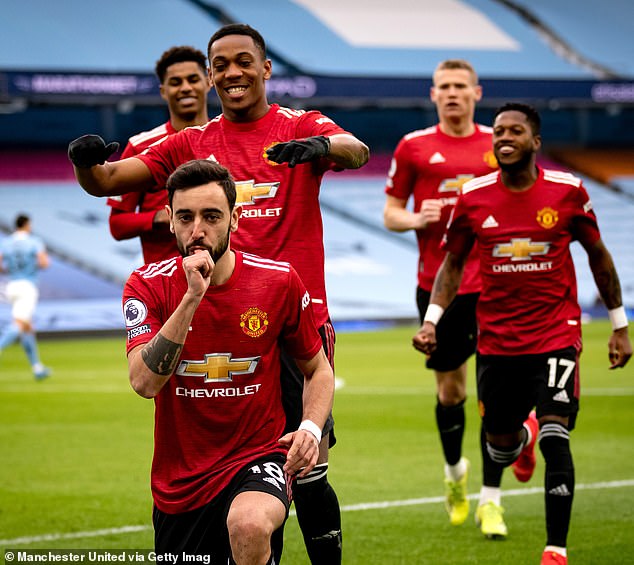 In the second leg of the teams’ Carabao Cup semi-final in 2020, Solskjaer partnered Martial with Mason Greenwood and Jesse Lingard with Rashford sidelined through injury.

Each of those games, Guardiola would have known very well that United’s speed was the danger but he couldn’t find a way to negate it.

This time there is no Martial or James , while Rashford has been well off form this season.

Cristiano Ronaldo is likely to start at the Etihad despite his lack of pace, so Rangnick should look at starting two pacy wingers.

Jadon Sancho is almost a certain starter given his form and fits the bill. Anthony Elanga has also impressed recently but might not necessarily start. 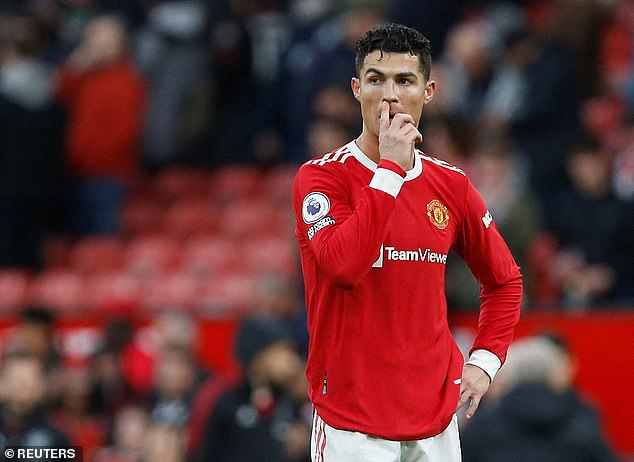 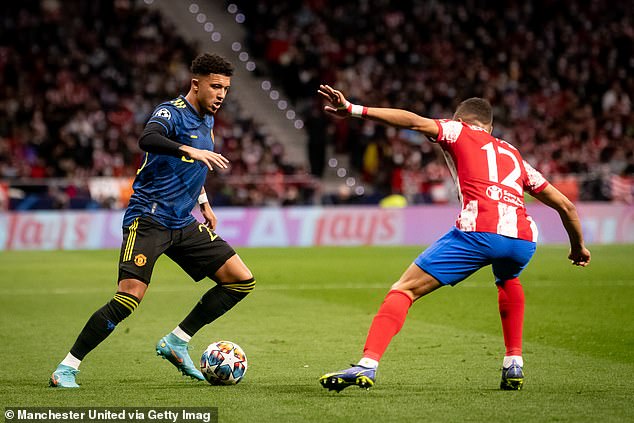 What was noticeable in the game last season was that City did not look at all comfortable with United’s high press.

Guardiola’s side aren’t used to being put under pressure in the majority of the games, with teams happy to settle back and allow City pass the ball around.

In the lead-up to the early penalty, Gabriel Jesus was mugged of the ball by Fred and Rashford was away. United suddenly had seven players in City’s defensive third and brains were scrambled, leading to Jesus, desperately trying to atone, clipping Martial just inside the box.

City’s defenders will try and pass their way out of trouble but commit two or three players to closing down and blocking off these avenues of escape and they become flustered and commit errors. 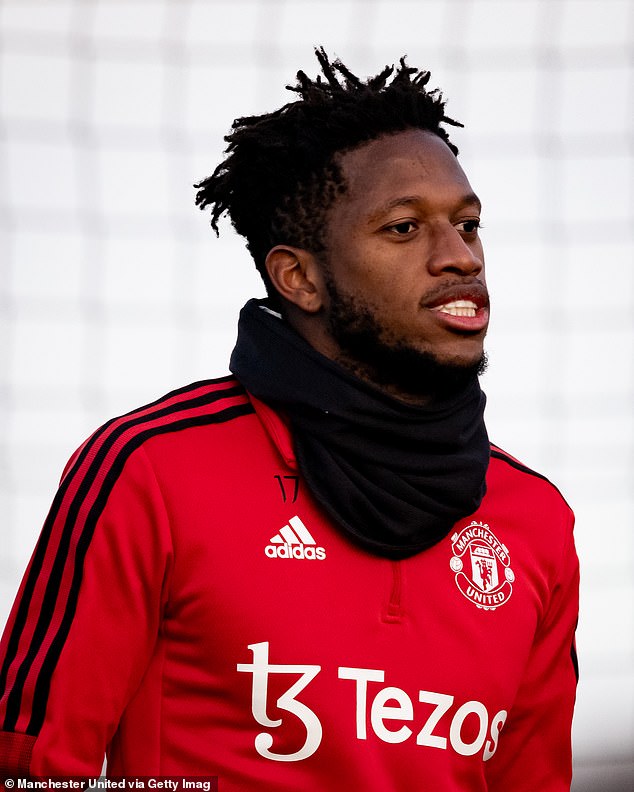 The high-press was something that seemed non-existent at United in the early stages of this season.

It’s something that Rangnick has tried to implement more of in the way they play but they still haven’t fully mastered the art of it under the German.

What also stood out with Solskjaer’s teams at the Etihad was how high their back-line played.

Harry Maguire and Victor Lindelof often stepped forward almost to the halfway line with the United captain often advancing past Fred and Scott McTominay into the City half. 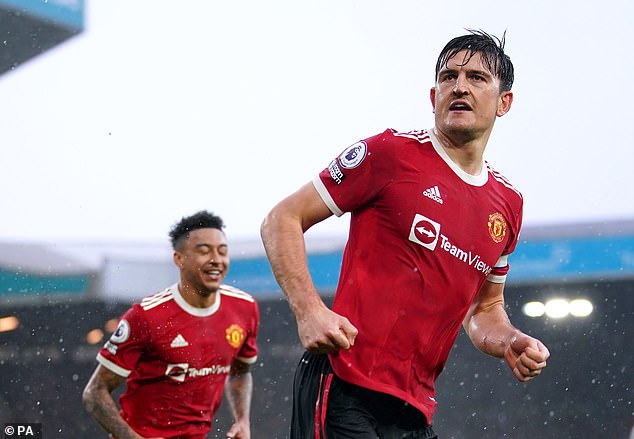 However, they along with Shaw and Aaron Wan-Bissaka have all struggled defensively this season and have been lacking in confidence.

Raphael Varane is now a regular starter alongside Maguire, while Shaw has battled for a place with Alex Telles and Wan-Bissaka has more often than not been left out in place of Diogo Dalot.

Solskjaer has proven that United can hurt City at the Etihad and they certainly have the weapons available to cause Guardiola’s side problems.

But in what has been a torrid season it could be a big ask to get the players who have impressed against City in recent years, playing at a standard on Sunday which can help Rangnick pick up where Solskjaer left off at the Etihad. 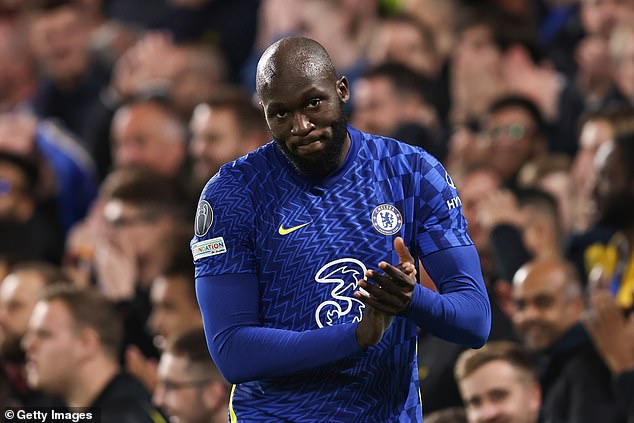 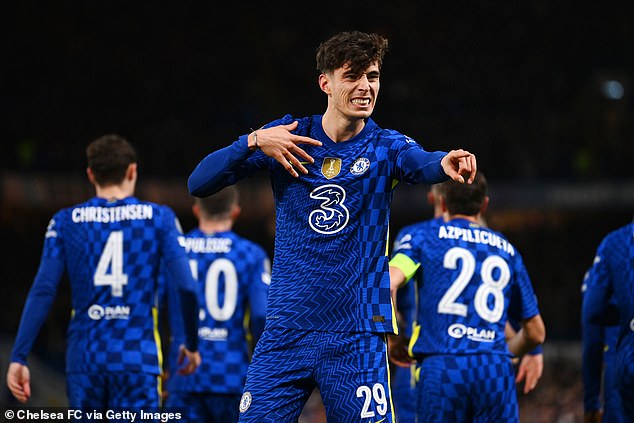 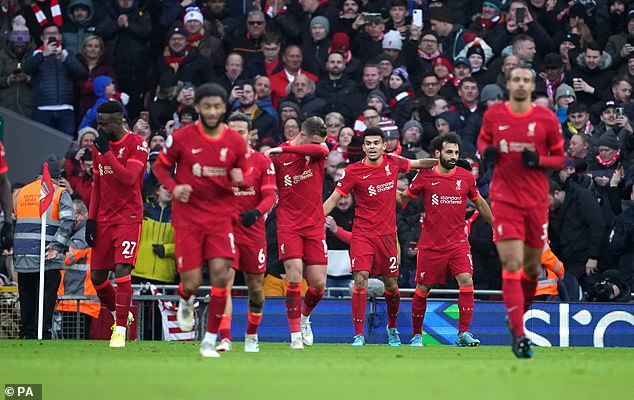 Liverpool vs Manchester City: Who will win the Premier League title race?