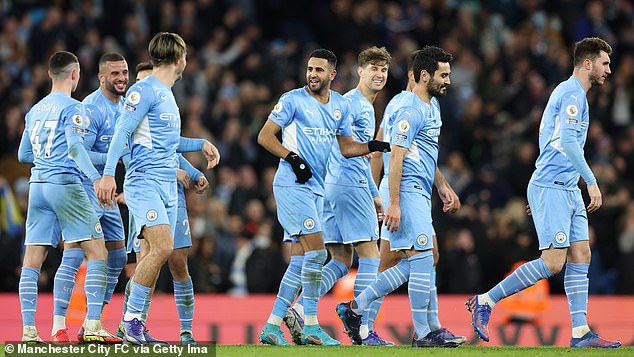 And to think, this is a Manchester City team that were meant to be feeling the heat. Liverpool breathing down their necks as the Premier League title race hits the home straight and all that.

Really? If this is City playing under pressure then their rivals have even less chance than we thought.

The lead at the top of the table is back up to six points over a Liverpool side who still have a game in hand, although the margin of City’s win here has done their goal difference no harm at all. 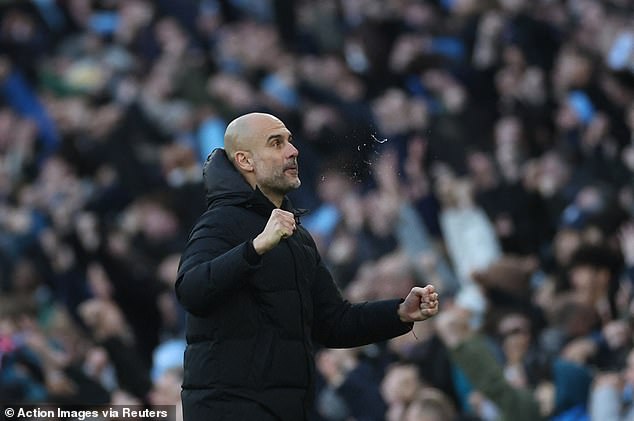 A Manchester derby that presented a significant obstacle after defeat to Tottenham and a less-than-convincing victory over Everton was navigated with almost casual ease.

‘Ole!’ sang the City fans as the players in blue shirts toyed with those in red during the second half and, no, it wasn’t some twisted tribute to Manchester United’s dear departed manager.

This is the Manchester derby in 2022; as close to a procession as you could get for the second time this season. 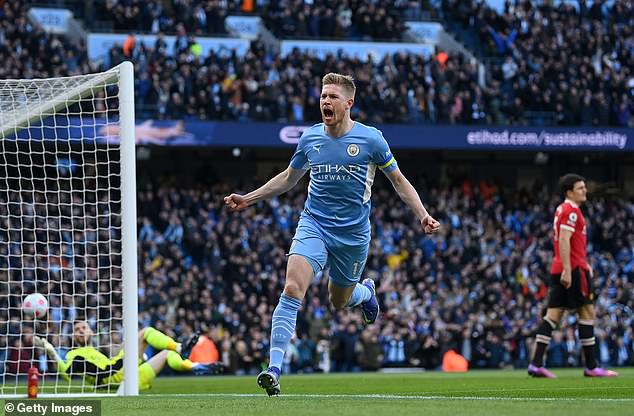 Kevin De Bruyne put on a masterclass in the Manchester derby, scoring twice in the first half 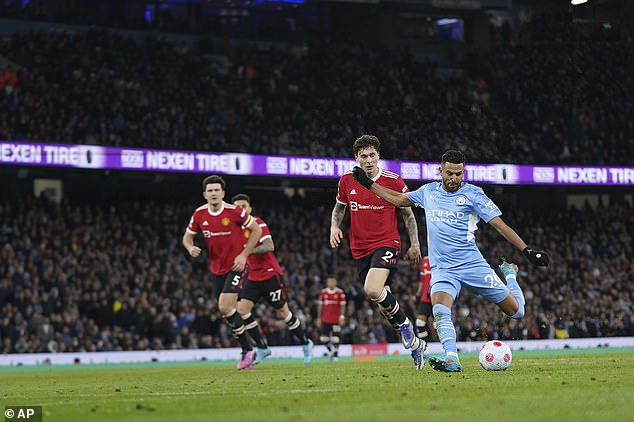 Riyad Mahrez added a double in the second-half, as City cut United to shreds

At least the scoreline in some way reflected what had occurred on the pitch this time, unlike City’s landslide 2-0 win over a desperately submissive United at Old Trafford in November.

Still, this was meant to be City’s biggest challenge in what remains of the season aside from a titanic clash with Liverpool here on April 10 in a game Jurgen Klopp’s side will almost certainly have to win.

United put up a fight in the first half and were level for all of six minutes, but was the outcome ever really in doubt?

City didn’t even have to play at their best, they just moved through the gears and accelerated away. Once again, United were left trailing helplessly in their wake. 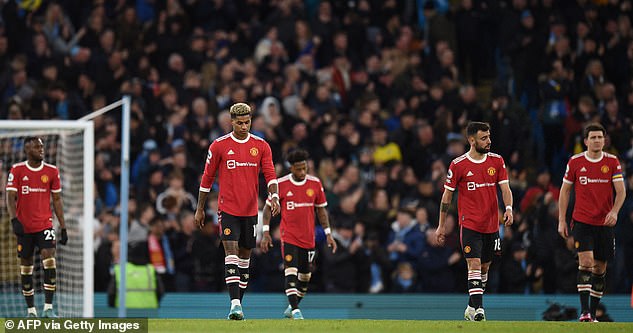 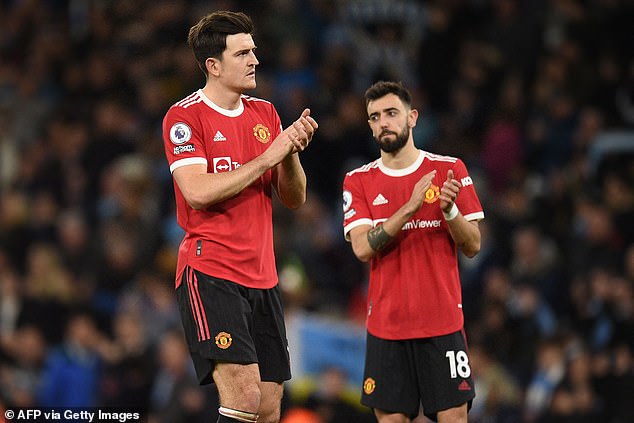 ‘I don’t think these players feel the pressure, that’s why they’re the players they are,’ said former City defender Micah Richards on Sky Sports. ‘It was men versus boys in the second half, City took the game to a different level.

‘It will be very difficult for Liverpool to come here and get something. The fixtures do favour City but it will go to the wire. Liverpool will fight all the way to the end.’

There were still seven minutes to go in the first half when Harry Maguire barged Phil Foden in the back as the City man released the ball to a teammate. 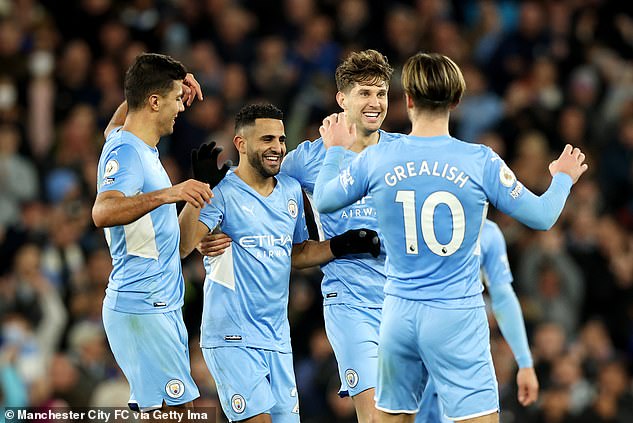 City were ruthless in the second half, putting United to the sword time and again

It wasn’t nearly as cynical as Maguire’s scything challenge on Kevin De Bruyne in the 63rd minute, but it betrayed United’s sense of frustration all the same. It’s what you resort to when the opposition are simply too good.

By the end, Scott McTominay was upending Joao Cancelo and muttering expletives at the City defender as anger got the better of him too.

De Bruyne was imperious, more so than his two goals and assist suggest. ‘He is, to an extent, the perfect footballer,’ said Jamie Redknapp. 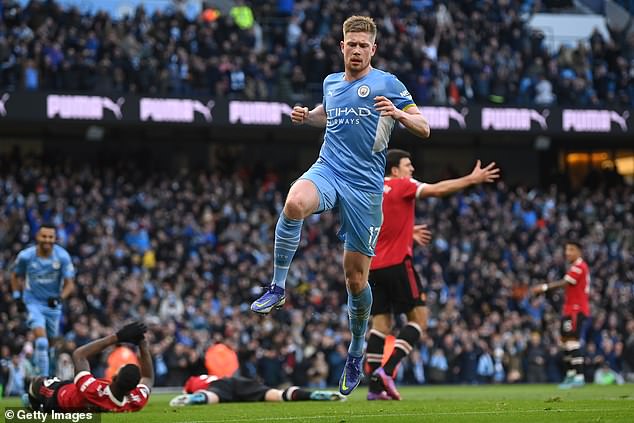 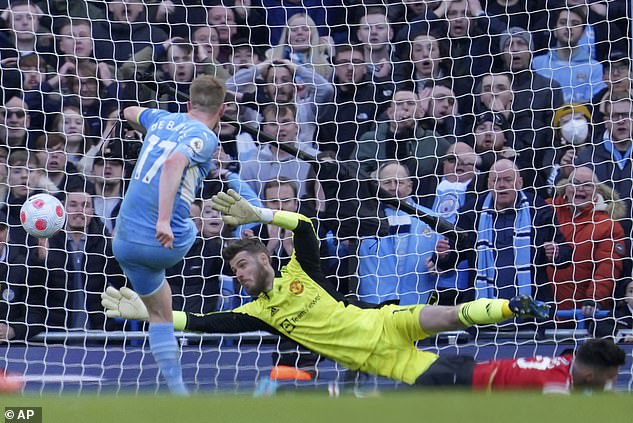 ‘He’s similar to Paul Scholes in striking the ball but is as quick as Stevie Gerrard. It’s a joy to watch him. He’s phenomenal. United couldn’t get their heads around the City midfield trio.’

Bernardo Silva and Rodri were excellent too, but so were Jack Grealish and Phil Foden. Riyad Mahrez, scorer of two of the goals, wasn’t too shabby either.

Pep Guardiola said before this game that City need a striker this summer and he’s probably right. He usually is.

But he said it last year as well and they seem to be coping quite well without Harry Kane. Imagine how good they would have been if Tottenham had let Kane go?

City would probably be out of sight instead of finding themselves still locked in a title fight with a Liverpool side who refuse to give up.

Considering they have only won once in the league at the Etihad in 14 years, it still looks like a tall order to beat this City team on their own patch.

Even more so if Guardiola’s side find the extra gears they didn’t need here and rise to the challenge again.

They certainly don’t look like a team who are about to wobble.

Eddie Howe promises to entertain but dodges Newcastle owner questions | Newcastle United Premier League and beyond: 10 things to look out for this weekend | Soccer 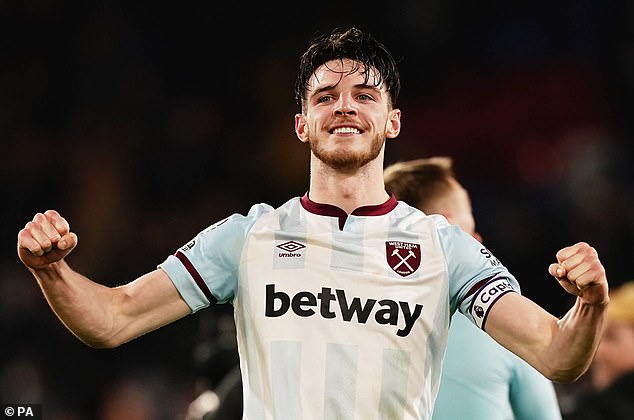 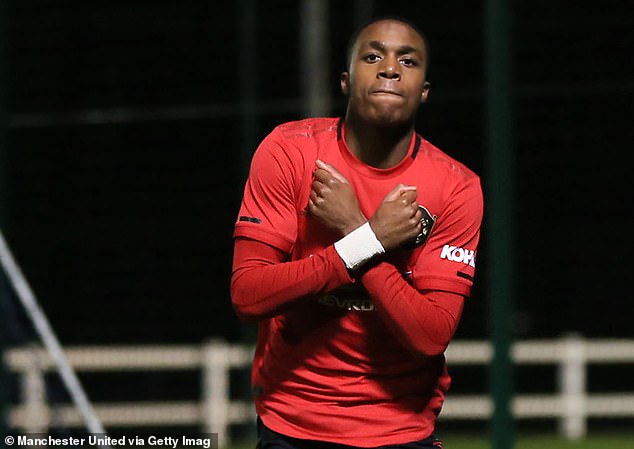