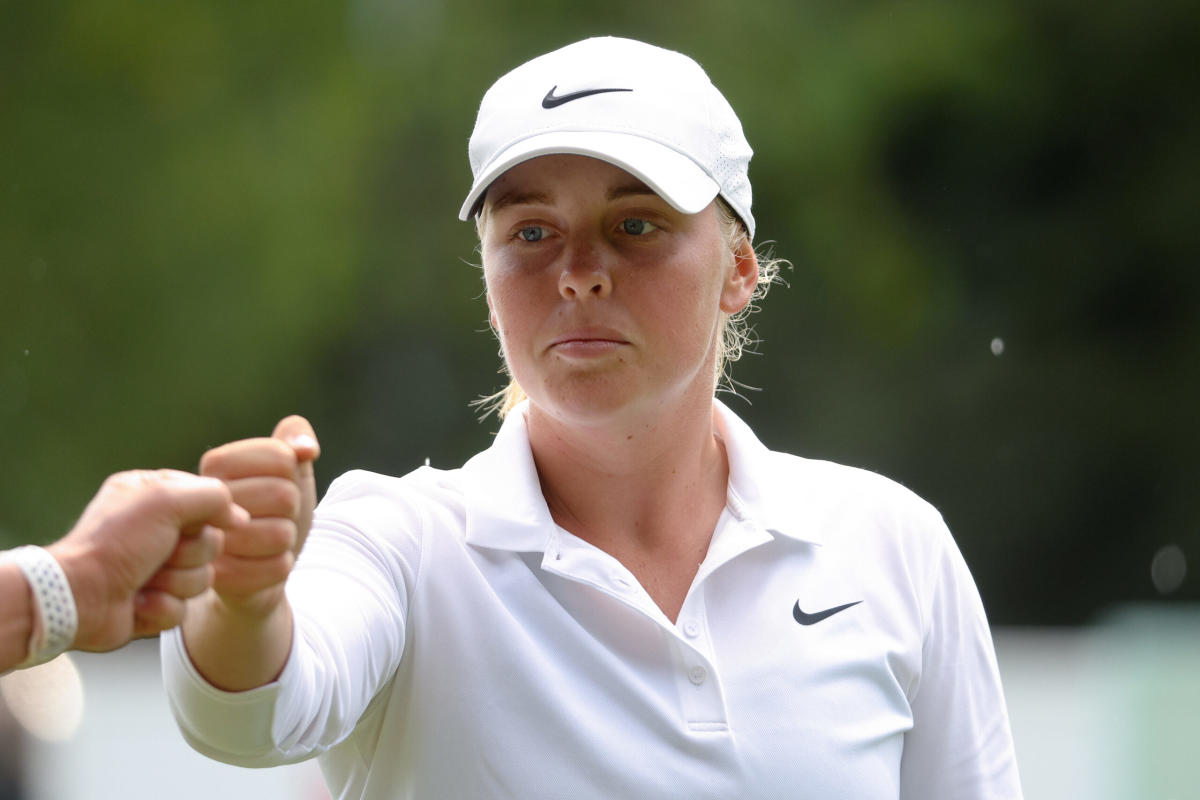 Maja Stark, who became a first-time winner on the LPGA in August, is playing her first event as a member of LPGA at the AmazingCre Portland Classic this week.

Come Sunday, she might be hoisting a trophy for a second time in her young professional career.

Stark opened 69-67 at Columbia Edgewater and was tied for fourth, a solid start for someone still finding confidence at the highest level.

“It’s very satisfying to know that I can do it and wasn’t just a fluke that I played well last time,” she said after her round which included an eagle, five birdies but also two bogeys. “I felt like I was struggling out there today, and then coming in with a minus-5, I’m over the moon that can it feel so bad but then end up working out.”

Comfortably making the cut could make for a little easier breathing over the final 36 holes.

“I’m just excited about maybe my mental state being a bit better this weekend,” the 22-year-old said.

At the top of the leaderboard is 23-year-old Esther Henseleit of Germany and 24-year-old American Lilia Vu. Both got to 10 under Friday and will sleep on a one-stroke lead.

Henseleit’s position atop the leaderboard may be a little bit of a surprise. She has 10 missed cuts in 18 starts this season. Her best finish is a tie for 12th, and that was back in March.

But Friday, Henseleit made nine birdies during a 13-hole stretch, including five in a row on her back nine, to shoot a 64, tying for low round of the week so far.

Vu backed up her opening-round 68 with a 66 on Friday. She has four top-10s this season including a solo third at the Bank of Hope Match Play.

Carlota Ciganda is solo third at 9 under. Ciganda has three top-5s this season including a tie for third in the Amundi Evian Championship.

Andrea Lee, who is tied for fourth with Stark along with four others, also shot a 64 on Friday.

Local knowledge appears to continue to pay dividends for Caroline Inglis, a member at Columbia Edgewater. On Friday, she made a hole-in-one on the par-3 13th hole.

“I like hit it kind of like, not very good, like it was like thin. I was like, okay, it’ll bounce up. That’s fine. It took a really big first bounce and just like went in,” she said. Inglis lives just down the road from the course and plays it often with her husband.

“I was so shocked like that it actually happened at my home course on a hole that I played so many times. I was like, oh, my God. Like in a tournament. Because I’ve had, this is my sixth one, but only ever had one other in a tournament but it was in college.

See also  LIV Golf: Matthew Wolff sinks a HOLE IN ONE at LIV Boston, the first in Saudi league's history

“It was just so surprising. It was fun.”

Meet Liz Young, the 39-year-old mom who won on the LET for the first time in 14 years

‘Fun to be a part of it’: Why Annika Sorenstam makes a point to attend ANNIKA Intercollegiate in Minnesota