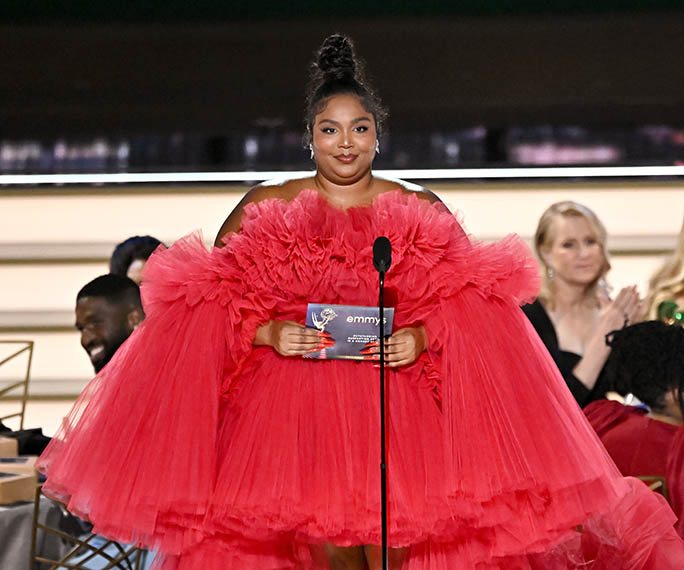 Lizzo set the 2022 Emmy Awards on fire.  The “About Damn Time” singer crossed over to the screen side of things and received the award for Outstanding Competition Program for her Amazon reality series, “Watch Out For The Big Grrrls,” at the ceremony.

Prior to accepting the honor, Lizzo joined Kenan Thompson onstage to present the award for Outstanding Supporting Actor in a Comedy Series. As she made her way to the spotlight, Thompson asked the award-winning artist to twerk but her dress only allowed for subtle dance moves.

Styled by Jason Rembert, Lizzo wore a custom cherry red gown by Giambattista Valli. The strapless crimson tulle gown had billowing sleeves, a short tutu skirt that was cinched at the waist and a long train. The tulle also created a floral-like texture at the bust. To amp up the glam factor, the multi-hyphenate entertainer styled her hair in a top knot bun and accessorized it with pearl drop earrings.

When it came down to the shoes, the “Truth Hurts” hitmaker completed her look with red strap sandals. Strappy sandals are taking center stage right now as one of the popular shoe styles. The heels have made many celebrities ditch comfort for their counterpart. With signature interlaced straps varying from barely-there to maximalist-like styles, lace up sandals are evidently the tried-and-true shoe of the summer.