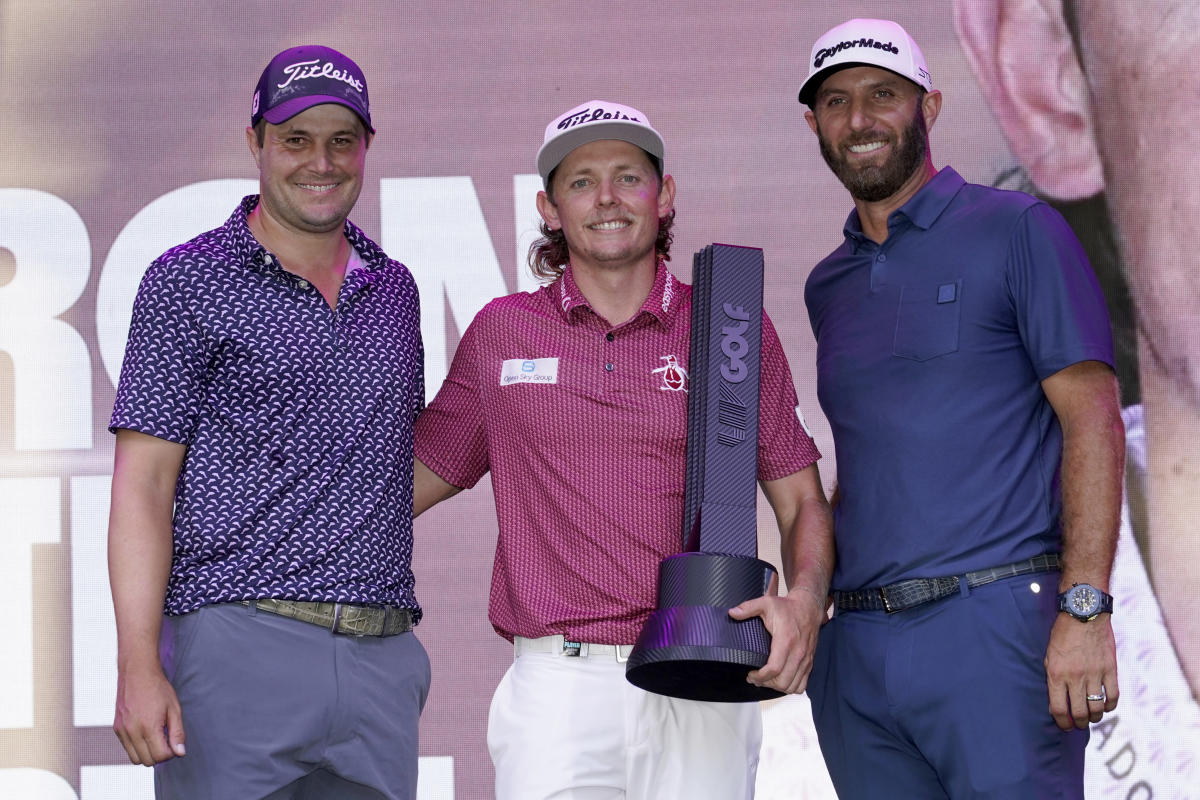 CHARLOTTE, N.C. (AP) — LIV Golf is turning up the heat on the Official World Golf Ranking, asking in a letter to Chairman Peter Dawson that its results be included retroactively in the world ranking.

LIV Golf, which has 48-man fields that play 54 holes with a shotgun start each day, applied to be included in the world ranking on July 6.

Among the requirements to receive world ranking points is for a new tour to comply with the guidelines for at least one year before it gets admitted. The Saudi-funded league did not play its first tournament until June 9.

Dawson, the former R&A chief executive, spoke last month on Golf Channel about the new formula for the OWGR, though he declined to speak specifically to the LIV Golf application.

The letter sent Friday to Dawson was signed by all 48 players in the LIV Golf Invitational-Chicago tournament, along with two-time Masters champion Bubba Watson, who has signed with LIV but is not expected to start playing until next year.

“An OWGR without LIV would be incomplete and inaccurate, the equivalent of leaving the Big 10 or the SEC out of the U.S. college football rankings, or leaving Belgium, Argentina, and England out of the FIFA rankings,” the letter said.

Players who signed with the lucrative LIV Golf series have not received ranking points except in the majors or in the European tour events they were allowed to play.

Dustin Johnson was No. 13 in the world when he signed with LIV. He tied for 24th in the U.S. Open and tied for sixth in the British Open. He has finished in the top 10 at all five LIV Golf events (including a win and a runner-up finish in the last two). He has fallen to No. 23.

Talor Gooch was at No. 35 and was slowly slipping in the world ranking until he played the BMW PGA Championship on the European tour, finished fourth and moved up back to No. 35. He dropped one spot a week later.

European tour events and other circuits if they choose to play, such as the Asian Tour or Japan Golf Tour, are currently the only places for LIV players to earn ranking points.

The Masters since 1999 has invited the top 50 at the end of the year, while the U.S. Open and British Open also use the world ranking as key criteria. The PGA Championship has a history of inviting the top 100, though it falls under “special invitations.”

The letter cites the OWGR’s mission to administer and publish each week “a transparent, credible, and accurate Ranking based on the relative performances of players.”

“How can such a system possibly exclude players competing at such high levels against some of the strongest fields of the year for large purses, at such high-profile events?” the letter said.

LIV Golf has 13 of the top 50 players in the world ranking, led by Cameron Smith at No. 3.

TIGER AND THE PIP

Tiger Woods was a tournament host for four days in the Bahamas and played a 36-hole tournament with his son in the PNC Championship late last year. That was enough for him to win the Player Impact Program and its $8 million.

The PIP program is expanding in 2023 and the winner gets $15 million. However, players cannot collect on the PIP bonus until they have played 16 tournaments. Woods played only three times this year, all majors, and it’s unlikely he will add many more.

There’s an exception, of course. And no, it’s not for anyone with at least 80 wins and 15 majors. According to the PGA Tour, the commissioner has discretion to award PIP money to players who don’t meet the tournament limit if they have a serious injury or other emergency that keeps them from playing.

The Presidents Cup is in college basketball country, so it only seemed natural for both captains to be asked for their starting five.

“I kind of like little Tom Kim as a point guard. He’s got a fast mouth on him, too, so he’s perfect for a point guard,” Immelman said.

Davis Love III, who played golf at North Carolina, had an easier time once he gave it some thought. Tony Finau and Scottie Scheffler both give him size and athleticism (and have a history playing hoops).

“I’m putting Tony out there all the time,” he said. “We’d tape his ankles, though.”

That was a reference to Finau badly spraining his ankle while running backward to celebrate a hole-in-one during the Par 3 Tournament at the 2018 Masters.

Love also liked Jordan Spieth and Kevin Kisner as his shooting guards. He didn’t even get to Sam Burns or Xander Schauffele.

“I still think we’re probably underdogs if we play in basketball, too,” Immelman said.

The end of next week is the deadline to fill the 20-man field for the Hero World Challenge in the Bahamas, and host Tiger Woods will be leaning on the world ranking.

The field is for the defending champion (Viktor Hovland) and the winners of the four players and The Players Championship. Cameron Smith won the British Open and The Players but won’t be eligible because he plays for LIV Golf now.

There are three exemptions, one for the tournament host if he needs it (he does). The rest come off the world ranking that was published after the Tour Championship.

Even though the Hero World Challenge is an unofficial event, it’s sanctioned by the PGA Tour and players who have violated its regulations by signing with the Saudi-backed league are not eligible.

Except for Smith, the next 13 players in the world ranking are not part of LIV Golf and would be eligible if they choose to play. LIV Golf would be quick to seize on the fact that world ranking points are offered to a 20-man field.

As for the QBE Shootout hosted by LIV Golf CEO Greg Norman, that’s still on the schedule and under the same set of guidelines. That means Jason Kokrak and Kevin Na, both LIV players, will not be defending their team title.

The Justin Thomas Foundation has donated enough money to provide weekend meals for 500 students at Camp Taylor Elementary in his hometown of Louisville, Kentucky, for the school year through the “Blessings in a Backpack” program that provides for needy children on the weekend. … Baltimore Country Club will host the 2026 U.S. Senior Amateur and the 2013 U.S. Women’s Amateur. Both will be played on the East course. Baltimore Country Club most recently hosted the 1988 U.S. Women’s Open. … Max Homa has come from behind in four of his five PGA Tour victories. … Michael Castillo, the head pro at the Kapalua Plantation course on Maui, will have a busy start to the new year. Castillo won the 2022 Aloha Section PGA at Poipu Bay. One week after helping to host at the Sentry Tournament of Champions on his home course, he’ll be in the field for the Sony Open in Honolulu.

STAT OF THE WEEK

Patrick Reed will have traveled nearly 18,000 air miles from his home in Houston to four straight tournaments in Boston (LIV Golf), London (BMW PGA Championship), Chicago (LIV Golf) and Paris (French Open) and then back home.

“We’re used to being called the favorite, even when we lose three Ryder Cups in a row.” — Davis Love III, U.S. captain at the Presidents Cup.