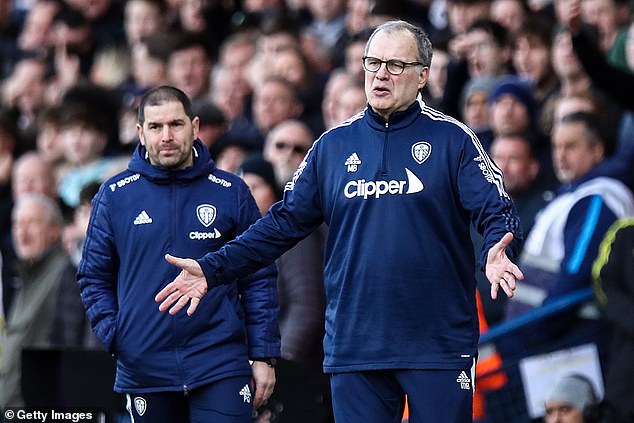 Marcelo Bielsa has given an emotional address to the Leeds players and staff this morning ahead of his departure.

The 66-year old gathered the squad together at around 9.15am to bid farewell after his sacking on Sunday.

Sportsmail understands he wanted to talk to them as a group rather than on a more emotionally-charged individual basis.

Despite strain telling on some relationships after a draining run of results, Bielsa is still viewed with huge respect within the dressing room for the work he has done and the coaching he has imbued in his players.

He is due to head back to Argentina after saying his farewells and will be replaced by 48-year old American Jesse Marsch once his work permit is cleared.

Bielsa departs after a poor run of form, with just one point gained from the last 18 on offer, and with the side in 16th, two points above the Premier League relegation zone and in serious danger of going down.

A club statement on Sunday confirmed Leeds have parted company with Bielsa after ‘this season has proved to be difficult’, with just five wins this campaign.

Chairman Andrea Radrizzani said: ‘This has been the toughest decision I have had to make during my tenure, taking into account all the success Marcelo has had at the club. With Marcelo as our head coach, we had three incredible campaigns and the good times returned to Elland Road.

‘He changed the culture of the club and brought a winning mentality to us all. The moments created, particularly in the 2019-20 season and winning promotion to the Premier League, will of course live long in all our memories, myself and the fans included.

‘However, I have to act in the best interest of the club and I believe a change is required now in order to secure our Premier League status. Recent results and performances have not met our expectations.

‘We find ourselves in a precarious league position and I feel now is the right time to bring in a new head coach, in order to have an impact in the decisive stage of the season. Naturally, myself, along with everyone else at the club would like to thank Marcelo for his efforts and achievements and we wish him the very best for the future.’

The 66-year-old was appointed in June 2018 after Paul Heckingbottom’s sacking, and has led the club for more than three full seasons, ending a run of eight managers in the previous three-and-a-half years.

His 140-match tenure marks him as the second-longest serving manager, behind Simon Grayson (169), since David O’Leary’s stint at the turn of the millennium.

Moreover, his record of 74 wins, 24 draws and 42 losses leaves him with a win percentage of 52.86 – the second-highest in history among Leeds managers with more than five games – narrowly behind legendary figure Don Revie (53.24).