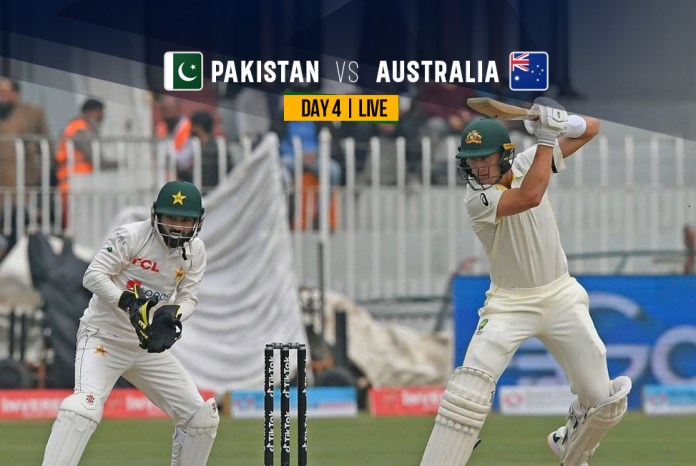 PAK vs AUS LIVE: Labuschagne, Smith eye to cut down deficit  Australia will look to continue their batting heroics as Marcus Labuschagne and Steve Smith resume the proceedings on the penultimate of the PAK vs AUS 1st Test in Rawalpindi. After Pakistan declared at 476, Australia have done their bit to respond strongly with 271/2 as an even contest between the two teams continues. Both teams will now hope for a drastic shift and take control of the game and force a result in a game that edges towards a draw. Follow Insidesport.in for all Pakistan vs Australia LIVE Updates.

Fifties from Usman Khawaja, David Warner and Marnus Labuschagne helped Australia reduce the deficit in the first innings of the Rawalpindi Test on Sunday.
At Stumps on Day 3, Australia’s score read 271/2 still trailing hosts by 205 runs. Steve Smith (24*) and Marnus Labuschagne (69*) are still on the crease for visitors. With bad light stopping play early on day two, Australia had only played one over. With a new day came new challenges.

The Australia openers did well to see off the tricky first hour and as the day progressed gained confidence to hit back. Khawaja, being the aggressor, was the first to bring up his fifty in 67 balls. Warner too followed suit a few overs later, registering his 33rd half-century in Tests. The duo looked comfortable in the middle, taking Australia to 138/0 at Lunch, still, 338 runs behind Pakistan’s first-innings total.

STUMPS: It’s a fill-your-boots sort of Test match this one #PAKvAUS

After lunch, Sajid Khan kept angling the balls into the left-handers and ultimately managed to break the partnership on 156. With just three runs short of his century Khawaja attempted a reverse sweep off Nauman Ali, a shot which led to the end of his brilliant innings on 97 (159). Australia went for tea 222/2.

With dark clouds hovering above, the final session of the day started. Labuschagne and Smith continued their innings with total control, and Labuschagne with a pair of boundaries in Sajid Khan’s over brought up his fifty. Like day two, players were forced off the field due to bad light and stumps was called eventually after it started drizzling in Rawalpindi.