‘White shorts was not the best idea!’: Former Roma star Kostas Manolas goes viral as he is unveiled by new club Sharjah next to a LION – before fleeing to safety after the predator let out a huge roar just inches away from him

Kostas Manolas showed some roar emotion when asked to pose alongside a real-life lion during a photoshoot for his new club Sharjah FC.

The UAE club signed Manolas on a two-year deal just days after they secured the services of Pjanic following the termination of his contract at Barcelona.

Sharjah wanted to unveil Manolas as their ‘Greek warrior’ and decided to incorporate a real-life lion into their photoshoot. However, it didn’t go according to plan. 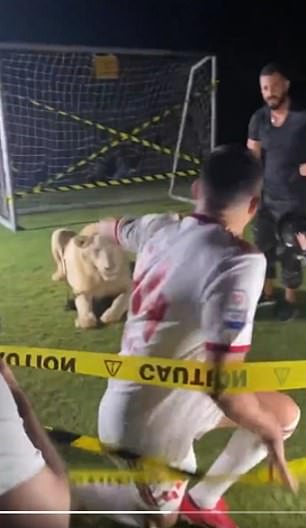 Fans couldn’t help but laugh at the behind the scenes footage as Manolas almost jumped out of his skin when the lion jolted towards him.

Manolas saw the lion move out of the corner of his eye and jumped to his feet before trying to get away.

Thankfully, the lion was attached to a metal chain but that didn’t stop Manolas from climbing over the ‘caution’ tape that was placed next to him as a prop.

UAE club Sharjah introduced new signing Kostas Manolas as a “Greek warrior” and part of his presentation theme included posing alongside an actual lion…not for the faint hearted. pic.twitter.com/67GUPRHIyv

Fans flocked to social media to poke fun at Manolas. One Twitter user wrote: ‘White shorts was not the best idea!’, while another added: ‘Can someone get him a clean pair of shorts please…’.

One fan wrote: ‘At least safety measures was considered. Caution tapes were used’. Another said: ‘Love how he puts the tape between him and the lion. Because that will deter it.’

Another Twitter user said: ‘Lion be like, ‘I know what a p***y like when I saw one’.’ Other joked Manolas was ‘trying to make it out alive for his debut’.

Some others took to social media to say Manolas was well within his right to be scared. They said: ‘My guy is right to be terrified. That is mufasa right there’.

Manolas’ new deal with Sharjah FC officially closes the door on his short-lived reunion with Olympiacos.

Manolas returned to his boyhood club in January after spending the last eight years in the Italian top-flight with Roma and Napoli.

The 31-year-old became Sharjah’s third high-profile signing of the summer. He joined the club alongside Pjanic and Paco Alcacer.

The nephew of Greek footballer Stelios Manolas will be looking to make his mark at the UAE club – which will be paying him £4million across the two years.