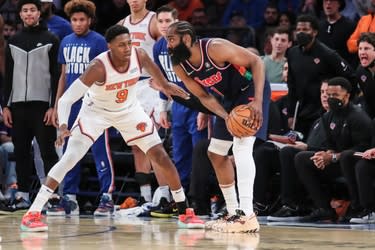 After losing to the Miami Heat in their first game after the All-Star Break, the Knicks looked to get a win for their home crowd at Madison Square Garden with the visiting Philadelphia 76ers in town.

Here are the takeaways…

– RJ Barrett started the scoring off with two made free throws after a hard foul on the first possession of the game, but Joel Embiid answered right back with two of his own. Julius Randle got his day started with a two-point bucket, but subsequently fouled James Harden on a three-point attempt. Harden would make all of his free throws.

– Some lazy ball handling by Randle led to a Harden poke steal which led to a quick two on the other end as turnovers would prove pivotal in this game. Down 11-8, Evan Fournier made his first three of the day to tie the game and then scored again to take the 13-11 lead. But the Knicks fell asleep on defense and the 76ers scored a quick two to tie it as the camera panned to a disgusted Tom Thibodeau on the sideline. Another Knicks turnover led to a transition three by the Sixers who now led 20-14, causing Thibodeau to call a timeout.

– Coming off the bench, rookie Jericho Sims energized his team and played great defense on Embiid, giving him fits on three straight trips to the basket. Sims finished the quarter with nine rebounds including an offensive board that led to a Fournier three to cut the deficit to one.

See also  Jazz reportedly say they didn’t trade Mitchell to Cavaliers out of spite, it was best for team

– Barrett would give New York the lead soon after with a dunk that concluded a 10-3 Knicks run. Harden quieted the hyped up MSG crowd with a three on the other end and then with time winding down, the former Net hit another three to give his team a 38-35 lead after a busy first quarter.

– The Knicks started the second quarter off hot with a Barrett steal who then passed it to his fellow Duke Blue Devil Cam Reddish who euro stepped his way to a bucket. But after that, it was the Knicks who struggled mightily with turnovers, ending the half with 11. In fact, with 7:13 remaining in the half, the 76ers led the Knicks in points off turnovers at 15-6.

– A 9-0 Sixers run in less than two minutes gave them a 51-40 lead, their largest of the game at that point. And after scoring 35 in the first, the Knicks cooled off considerably in the second quarter only scoring 21, aided by a Fournier three-pointer with time winding down to make it 65-56 going into halftime.

– The name of the game in the third quarter was slowly but surely for the Knicks. Outscoring the Sixers 33-26 thanks to excellent play from Barrett, Fournier and Immanuel Quickley, New York showed some guts after it looked like Philadelphia might have run away with it early.

– With 1:12 left in the quarter, Quickley hit a three-pointer to get the Knicks to within one at 88-87 after the 76ers were hovering around a six-point lead for most of the quarter. Thibodeau would go on to get a technical foul with two seconds left in the quarter and the Knicks went into the fourth quarter only down 91-89.

– The fourth quarter started off as promising as the third quarter ended for the Knicks. Just a minute in, New York got its first lead since it was 31-30 in the first quarter after an extended 15-5 run gave the Knicks a 96-93 lead.

– After that, New York and Philadelphia exchanged blows possession after possession, with neither team leading by more than three points for about five minutes. Sims and Mitchell Robinson fouled out back-to-back with just under nine minutes left to play, leaving Obi Toppin as the only big man available for the Knicks.

– Ultimately, Embiid, Harden and Tyrese Maxey proved to be too much for the Knicks as the 76ers ended the game on a 19-4 run that extended for about six minutes to give them a 125-109 win over New York.

– But the biggest disparity of the game came from the free throw line. The Sixers went 39-of-44 (88.6 percent) from the charity stripe — with Embiid and Harden accounting for 33 of those makes — while the Knicks went a measly 22-of-35 (62.9 percent).

The Knicks finish their home-and-home series against the 76ers when they travel to Philadelphia on Wednesday for a 7:30 p.m. tip.