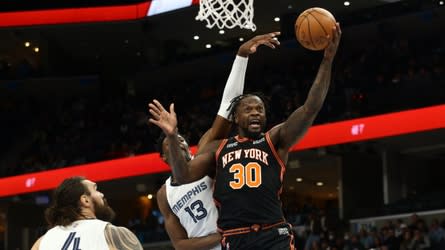 The Knicks’ three-game win streak came to end, despite scoring 40 points in the third quarter, losing to the Memphis Grizzlies 118-114 on Friday night.

Here are the takeaways….

– Julius Randle hit his second three-pointer early on in the game to give him nine of the Knicks’ 11 points, as they led the Grizzlies by a basket. All-Star Ja Morant buried his first three-point attempt to put Memphis up 12-11 with 7:46 left in the quarter. The two teams kept trading buckets, as Randle hit his third three and then De’Anthony Melton tied the game up at 25-25 with a floater.

Evan Fournier nailed a three-pointer with time winding down, as the Knicks trailed the Grizzlies 34-30 after the first quarter. Randle scored 15 points to lead New York, while Morant had 11 points for Memphis.

– Mitchell Robinson started off the second quarter by throwing down an alley-oop jam from Alec Burks to pull the Knicks to within two points. Burks gave New York a short-lived lead, as Jaren Jackson Jr. made a three to put Memphis back up, 39-37. After a basket from from RJ Barrett, the Grizzlies went on a quick 7-0 run to give them their biggest lead of the night, 52-41, with five minutes left in the second quarter.

– Burks scored seven of the Knicks’ nine points to open the third, hitting a three-pointer to tie the game at 65-65. Randle scored a layup to take the lead and was fouled by Jackson Jr., forcing Memphis to call timeout before the foul shot, and then completed the three-point play to go up 68-65. Robinson got a tip-in to put the Knicks up seven, as they went on a big 12-0 run.

– Barrett spun his way to a floater and drew the foul, but missed the foul shot, as the Knicks went up 78-72. Fournier made a three and then Barrett scored to go up 91-81, their biggest lead of the night. The Knicks outscored the Grizzlies 40-26 in the third quarter, taking a 96-87 lead into the fourth.

– Memphis closed the gap to three points to start the fourth quarter, as Taj Gibson fouled out early on after just 15 minutes of action. Morant brought the Grizzlies back in front by a point, but Immanuel Quickley came through with a three-pointer to put the Knicks back up 104-102 with 5:42 left in the game. Jackson Jr. blocked Barrett at the rim, and Morant took off in transition, finishing the left handed layup to go up 109-106. Bane stole Randle’s bad pass, and found Morant on the fast break for an alley-oop layup, as Memphis went on a 10-2 run, and led 115-108 with 57.8 seconds left. The Knicks cut the lead to three points after some missed foul shots, but it was too little, too late.

– Randle finished the game with 36 points on 11-for-27 shooting with 11 rebounds, six assists, two steals and two blocks in 40 minutes. Barrett scored 23 points to go along with seven boards, and Burks had 18 points on 6-for-11 shooting. Robinson had 10 points, 15 rebounds, four blocks, four assists, and three steals. Morant led Memphis with 37 points and eight assists, and Jackson Jr. recorded 13 points and five blocks. The Grizzlies blocked 16 shots as a team.

See also  Detroit Pistons, without Jaden Ivey and others, fall to Pacers in Summer League, 101-87

The Knicks head back to New York but will remain on the road and face the Nets in Brooklyn on Sunday, March 13 at 1:00 p.m.