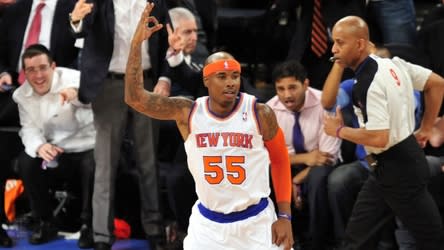 Quentin Richardson played with the Knicks for four seasons.

And after his 13-year playing career ended, Richardson transitioned to a front office role as Director of Player Development for the Detroit Pistons.

So Richardson has a wealth of knowledge when talking about the dynamics of an NBA organization.

“So he obviously deserves some of that criticism but I would, I think it goes too far because I mean, you got to remember this is the guy who was like right up there for Coach of the Year, who was being praised and celebrated for changing the Knicks around the way he did. So you have to believe it’s more than just what he’s doing that’s changed this season and I’m smart enough as a plyer to know that Tom Thibodeau has been consistent with who he has been as a coach and who he’s been as a person from everything that we, from the public eye, could see.

“And I don’t see anything that’s changed. So when I look at things like that as a player, I have to then go from not looking at him anymore to looking at what things have transpired with the players and with the team. Once of the biggest things that stands out is Derrick Rose not being there. We know how much he meant to the team’s success last year, how he helped them.

“And I think that was a big difference among some of the additions and things that didn’t go the way they wanted to go. But that’s not really in the coach’s control. His job is to coach his team and to be who he has been. I feel he’s been consistent with who he has been; he just has, you know, the team is a little bit different this year and it’s a down year.”

“He’s somebody that from Day 1, he’s another guy that the New York – the whole everything of it – it isn’t too big for him. I mean when you look at him he shows emotion and things like that but I wouldn’t say he’s a guy that gets too high or too low. Through everything, I think he’s one of those guys who – he just keeps his head down and just keeps playing no matter (what’s happening) – the boos or whatever.

“That’s what I was seeing from him, that he’s continuing to work on his game, he’s adding things, he’s getting better, he’s improving in different areas. And he’s at the point where his confidence is growing. I think he’s gained a lot of confidence and he’s seeing it and the way he’s putting up points right now.”

WHY KNICKS ARE UNABLE TO FIND SUCCESS THIS YEAR

“I think this year (there were) a lot of big-time expectations put on them. They went from being the guys that were doing the hunting to being the hunted and Julius Randle, he received All-Star, All-NBA recognition. He started receiving different types of defenses and I’m sure he was the focal point on the scouting report. So he’s seen different schemes and stuff and I think he’s done a good job weathering the storm down the stretch and finding his game back.”

“I would be pretty confident in what I would have did. Especially being homegrown. I was in Chicago. I was exposed to a lot in my two years at DePaul. I think I would have done pretty well with NILs being a homegrown kid

My dad drove the CTA so there was synergy there, Lee Richardson Sr. drove a CTA train for 38 years.”

You have a chance to hear them on a weekly basis on their NBA League Pass show, Hooper Vision.

Richardson and Crawford appear weekly on the platform this season to provide commentary, insight and share stories while watching a game.

“It’s an alternate place where people can come and observe the game and get insight from guys that played at that level for a long time. We can relate to a lot of different situations that’s going on,” Richardson said during an interview on The Putback. “Jamal is unbelievable at being able to articulate what’s happening with plays, the reasons coaches are running these plays and why players make certain moves, or to try to do certain things to get advantages. So we give those viewpoints of the game just from a players’ standpoint.”

Crawford and Richardson have guests on their shows (past guests include Kevin Durant and Fat Joe) and give viewers insights into what’s happening on the court and why it’s happening.

For Richardson, calling the games on the league’s alternate telecast was an easy transition.

“Before Hooper Vision came, I would sit down every night – if there wasn’t a national game on, I was picking my games on the package to watch. That’s just what I do. I’m a hoop fan,” Richardson said. “I was a hoop fan before I made the league, while I was in the league, now that I’m out of the league. I’m a fan of the game, I love all the talent and to be able to sit there, to deliver the game and chop it up with legends, peers of ours, it’s like we’re kids in a candy store. For real.”

Hooper Vision is one of several alternate screen telecasts provided by the league. The programming includes an NBA Strategy Stream with Nate Duncan and Danny LeRoux.

Sara Zucker, the NBA head of NextGen Telecast, says that Hooper Vision has drawn an audience from around the globe and has resonated with fans.