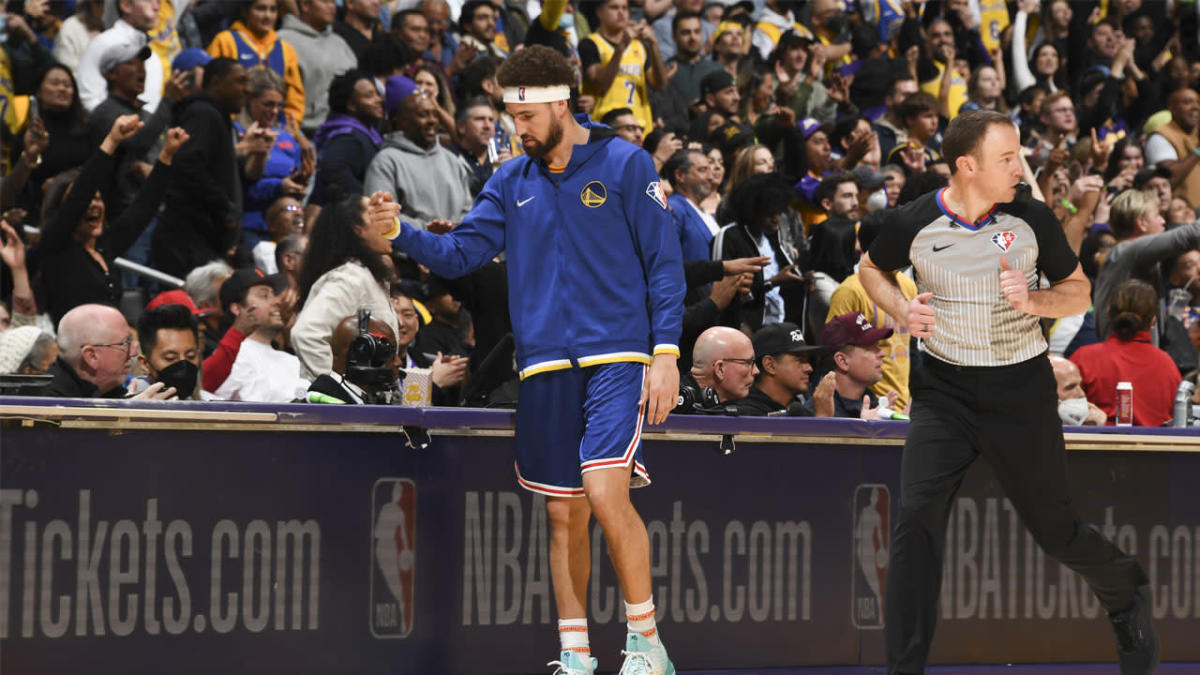 The temptation among the Warriors’ fans is to worry about Klay Thompson, who in inviting all measure of concern after saying on Thursday that he needs to be better and then going out on Saturday and being no better.

But remember that the Warriors have no chance of winning a championship with the Klay of the past couple games.

And the odds of reaching the Western Conference Finals with Klay at 80 percent – which may be all that is reasonable insofar as he is returning to the NBA after a 31-month absence – were long in October and will stay long until it actually happens.

Thompson’s latest poor performance was one of several reasons they gagged away yet another game, this one a 122-114 loss to the Los Angeles Lakers at Crypto.com Arena. He scored seven points in 31 minutes, missed 10 of his 13 shots, had as many turnovers (four) as assists.

He didn’t look like the Klay he was before and wants to be again.

Or like the Klay the Warriors need to be a legitimate contender.

“Klay’s pressing,” coach Steve Kerr said. “He got into a pretty good groove over the month or so before the All-Star break, and I feel like the sickness, the illness that kept him out of a couple of games probably affected his conditioning, and his timing. So, he struggled the last two games.”

See also  Scotty Pippen Jr. has ‘chip on his shoulder’ after going undrafted

An undisclosed illness caused Thompson to miss the last two games, a loss to Dallas at Chase Center last Sunday and a loss to the Timberwolves last Tuesday in Minneapolis. He returned Thursday against the Mavericks at Dallas, scoring 16 points while shooting 6-of-17 from the field and 2-of-8 from distance. Among his misses were an airball and a shot off the side of the backboard.
That’s not the Klay of yore.

That is the Klay of the past two games.

The Warriors fell behind early to a bad Lakers team because their starters did not appear ready to play. They were a step slow, a second late, their shots weren’t falling, and their defense was tame. While Klay was missing his first three shots and committing a turnover, the Lakers were building a 17-9 lead in the first six minutes.

When the Warriors recovered, it was because their bench was marvelous. The energy of Jordan Poole, Jonathan Kuminga, Juan Toscano-Anderson and Moses Moody was both productive and contagious. It’s why the Warriors outscored the Lakers 27-10 in the first seven minutes of the second quarter and led by as much as 14 before halftime.

“They helped us get back in the game,” said Stephen Curry, who scored a team-high 30 points, said of the second unit. “Obviously, we had a rough start and that was a good sign. We need more of that. We just couldn’t sustain it.”

They did briefly, and when Thompson made his first shot of the second half there was a flicker of hope. It didn’t last. Two turnovers later – and after being robbed of a layup on a missed goaltend – Klay was brooding on the bench as if frustrated by the inability to be the player he’s always been. The player he expects to be again.

“You understand what level he’s trying to get back to,” Curry said. “There are going to be ebbs and flows because he’s trying to find that consistency. Coach as talked to him a little, about just letting the game come to him. But you don’t want him second-guessing himself or becoming hesitant. There’s a fine balance to who he is as a basketball player, who he is as a shooter and scorer, that he has to figure out.

“We’ve got to support him. Put him in position to be successful. And stick with him. He’s shown how legendary he is when things are clicking. And that’s going to happen.”

And it will. Meanwhile, Klay’s struggle is a microcosm of the Warriors’ struggle.

They’ve lost eight of their last 10 games, with several of the defeats a direct result of catastrophic fourth quarters, but they continue to believe they’re better than that. The misery continues for a team that entered 2022 with championship aspirations that at the time seemed conceivable.

Three weeks after his first game since June 2019, Thompson entered February looking as if he was regaining his old form. He shot 50.8 percent from the field, including 51.4 percent beyond the arc in the first four games of the month. He was Klay.

“He’ll get it back,” Kerr said. “He cares so much. Klay wants so badly to do well. He’s definitely pressing, and he’s just got to let the game come to him and he’ll get there, and we’ll get there.”

That’s the belief, based on the history of the Warriors as a resilient bunch, with Klay among the most irrepressible. For now, it’s a battle. And misery is winning.