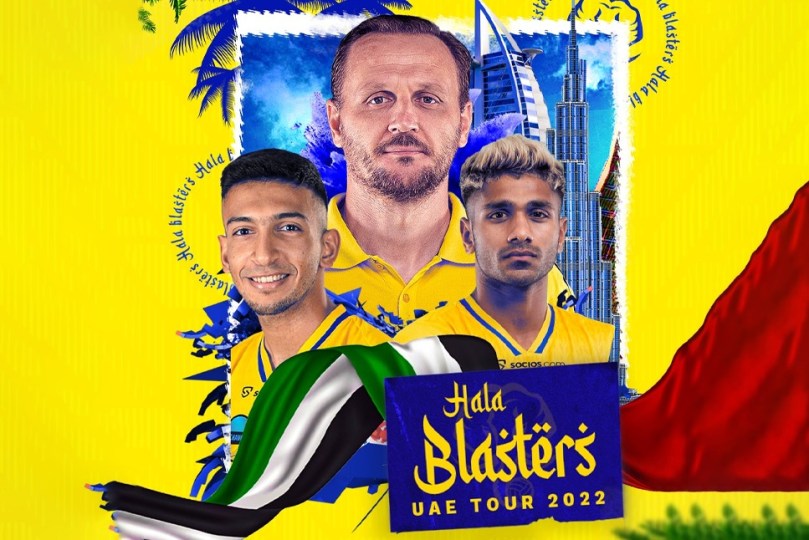 ISL 2022-23: Kerala Blasters to begin Pre-Season campaign, SET to travel to United Arab Emirates: Kerala Blasters FC is all set to begin their pre-season preparations ahead of the 2022-2023 Indian Super League (ISL) season. The club will start its pre-season training in Kochi on August 1 and will travel to the United Arab Emirates (UAE) by mid-August for friendly matches against UAE Pro League clubs Al Nasr SC, Dibba FC, and Hatta Club of UAE First Division. Follow ISL 2022-23 updates on InsideSport.IN

The squad, under Head Coach Ivan Vukomanovic, will train at the Al-Nasr Cultural and Sport Club for a duration of 12 days. The pre-season tour is being facilitated by H16 Sports.

Habibi, we are coming to Dubai! 😄🇦🇪

The first pre-season friendly for the Blasters will be against Al-Nasr SC on August 20, 2022, Sunday, at Al Maktoum Stadium, Dubai. On August 25, they will face Dibba FC at Dibba Al-Fujairah Stadium and the final match is scheduled on August 28 against Hatta Sports Club at Hamdan Bin Rashed Stadium. All three matches will be ticketed.

The UAE is like a second home for Kerala Blasters FC, owing to the huge number of fans that they have in the region. The final match of the 2021-2022 ISL Season between Kerala Blasters FC and Hyderabad FC was also screened at the Dubai Expo 2020 with over 10,000 people in attendance. The Club looks at the pre-season matches as an opportunity to engage their passionate fan base in the UAE.

“Our goal has always been to grow the great sport of football, and we are happy to collaborate with Kerala Blasters Football Club. We extend a warm welcome to them for their pre-season tour in UAE. This event will bring together a few of the greatest clubs and players to compete in the pre-season, thereby opening a new chapter for Indo-Arab football matches by clubs, training and ensuring world-class competition and facilities whilst connecting to a vast fans audience,” said Chairman of H16 Sports Hassan Ali Ibrahim Al Balooshi.

“There were varied venues for pre-season abroad, however, we chose UAE for various reasons. The initial plan of the club was a camp for less than two weeks with three friendly matches which will be executed as well in this pre-season. I’m delighted that all our UAE fans can come and be part of us at the stadium. This pre-season match is crucial for the club and all our supporters and this will assist us to test our squads’ limits as well’. said Kerala Blasters FC Sporting Director, Karolis Skinkys.

This will be the first time in 3 years that the Blasters face off in front of UAE crowds, giving the fans in UAE a much-anticipated opportunity to welcome their Blasters heroes. As for the Blasters, with preseason expected to start on Aug 1, these matches in UAE are expected to provide a difficult challenge for the club as they prepare for the upcoming Hero Indian Super League 2022/23.