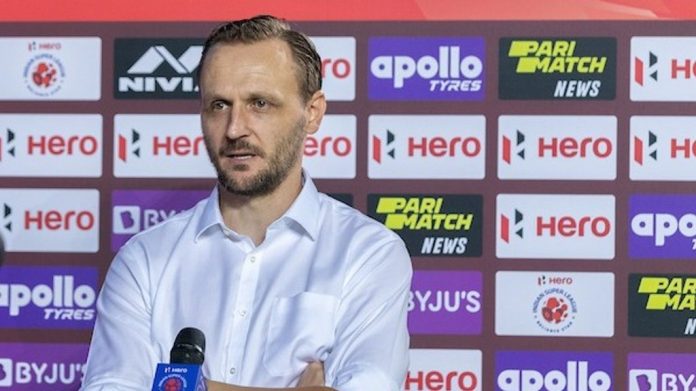 ISL Season 8: Kerala Blasters end their league campaign with a 4-4 thriller against FC Goa in the Indian Super League on Sunday night at the GMC Athletic Stadium in Bambolim. Jorge Pereyra Diaz scored a brace whereas Alvaro Vazquez and Vincy Barretto scored one each to play spoilsport on a night where Airam Cabrera scored a brilliant hattrick. Follow all the ISL 2021-22 LIVE Updates only on InsideSport.IN

Diaz scored the brace in the first 25 minutes handing Kerala Blasters an early lead in the game. The Blasters went into the halftime break with a 2-0 lead and Ivan Vukomanovic must have thought that he had the game in the bag. But football is a funny game as FC Goa played sensational football to hold the Blasters to a 4-4 draw.

That’s one way to close out our league campaign! 😅

Vukomanovic certainly enjoyed the goals and was happy with the result. He highlighted how both teams were emotionally drained and wanted the league phase to end as they both experienced a lot of hardships in this campaign. He also revealed how his team is also suffering from a lot of problems but they need to continue for one more week as they have qualified for the playoffs.

“I think that nobody could have predicted this kind of result today. But if you see the fact that today’s game was not important for both teams, we came to play football, and everybody wanted to enjoy this game tonight. So, I think that whoever was here tonight, enjoyed the goals, they enjoyed the moments. We should say that we’re happy with the result, all the teams now in this part of the season, even both teams today are physically and emotionally empty. And we just wanted this regular part of the season to end.

“Many teams already knew that they were out mathematically from the playoffs and were emotionally and physically empty. From our side, as well we were missing some key players today. But anyway, we have to deal with those things. And we have one more week to manage to play two games, and then we’ll see what will happen further on but you know, it is an exhausting period, especially after the New Year’s and with the Covid-19 outbreak, especially with the isolation, it was exhausting physically and mentally. We saw both teams emotionally empty and wanting to play football, but both of us were on the limits. So, now we will recover for the next game and see what will happen,” the Serbian tactician explained at the post match press conference.

Also Read: ISL Season 8: I am happy with the team’s performance, says FC Goa’s Derick Pereira after a 4-4 draw against Kerala Blasters

Vukomanovic then shared how he was frustrated by conceding late goals and only securing a single point from the game. He highlighted how things were in their grasp but they let it all go. The Blasters still could have killed the game but they lacked quality in certain moments to put away the chances.

“When you sit comfortably and try to manage your game, and then after one minute you concede that goal and then you have to go, you know, we had moments even after that to kill the game, but, the individual quality that we didn’t have in that part did not allow us to get done with this game earlier. And then when you have an opponent against you with so many quality players in their team, they can create danger. So that was the case. In this kind of game, you can see everything and in this league, you can see the things that you can see nowhere.”

The Kerala Blasters tactician then went on to reveal how he will look to address some of the errors in the second half in defence. But mostly feels that this 20 minutes is irrelevant as the playoffs come up and it is a new challenge altogether for the Yellow Army.

” So, actually whoever played tonight, they were enjoying the goals. So from the coaching side, these are some things that we have to correct to prepare for the next games. But now, whatever happened in the last 20 games, doesn’t matter anymore. There are two new games. It will be an open fight against four teams who want to fight for a spot in the final so we’ll probably prepare well for these two games,” he asserted.

The Serbian feels that knowing their opponents in the Semifinals does not really matter to him as he feels that whoever they face they need to be at their best preparation to get to the finals. He also highlights how small details will make a difference against such quality sides.