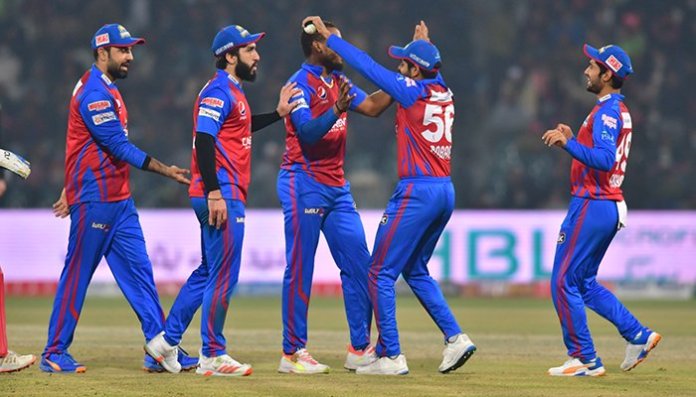 Lahore Qalandars vs Karachi Kings LIVE: Karachi Kings finally won their first game of the tournament as they defeated Lahore Qalandars by 22 runs in the Pakistan Super League Season 7 on Friday at the Gaddafi Stadium, Lahore. Chasing a 150-run target, the Qalandars could just make 127 for the loss of nine wickets in 20 overs, with Mohammad Hafeez top-scoring with 33. The victory finally helped Karachi end their eight match losing streak. Follow InsideSport.IN for more updates

Opting to bat first, Karachi Kings got off to a slow start. Opener Joe Clarke, who top-scored in the previous game for the Kings was dismissed for 12 runs on the board. Shaheen Afridi took the wicket of the other opener Sharjeel Khan soon. Skipper Babar Azam and Qasim Akram tried to stabilise the innings. However, Qasim was dismissed for 26 and after 10 overs, Rashid Khan dismissed Babar for 39 to reduce his side to 81 for 4.

See also  Kane is a great captain, kept telling me I can finish match against RR, says Abhishek • InsideSport

Rohail Nazir fell three overs later, scoring 18 runs and this wicket triggered a collapse which saw the Kings slip from 99 for 4 to 116 for 8. Mohammad Nabi, Imad Wasim and Chris Jordan all departed for single-figure knocks as Rashid Khan and Mohammad Hafeez made inroads with the ball. However, Lewis Gregory and Usman Shinwari prevented an all-out collapse, putting on 30 runs off 23 balls for the ninth wicket before both falling to Zaman Khan in the final over as the Kings were all out for 149 with one ball to spare.
For the Qalandars, Zaman Khan and Rashid Khan were the pick of the bowlers as they picked up a four-wicket haul each.

Defending the low score, Karachi made a good start to its innings with pacer Mir Hamza dismissing Fakhar Zaman, the tournament’s highest run-scorer for just one run in the second over – the first time the Qalandars opener has been dismissed for fewer than 30 runs in this season. Lahore Qalandars were soon reduced to 10 for 2 as Hamza picked up Abdullah Shafique in the fourth over.

The Qalandars batsmen then fell like a pack of cards with Kamran Ghulam dismissed for 13 (15) in the ninth over. In the 12th over two wickets fell in two balls as Phil Salt was caught for 8 while Hafeez who scored 33 was unfortunately run-out as five wickets fell for 64 runs. Harry Brook and David Wiese however threatened Karachi Kings with a 55 run partnership for the fifth wicket.

Mir Hamza was once again the man to provide the breakthrough as he removed David Wiese in the penultimate over to bring Kings back into the game. In the last over, Lahore needed 25 runs, and Jordan bowled brilliantly as he gave away just two runs and picked two wickets as Karachi finally got their first win of the season.