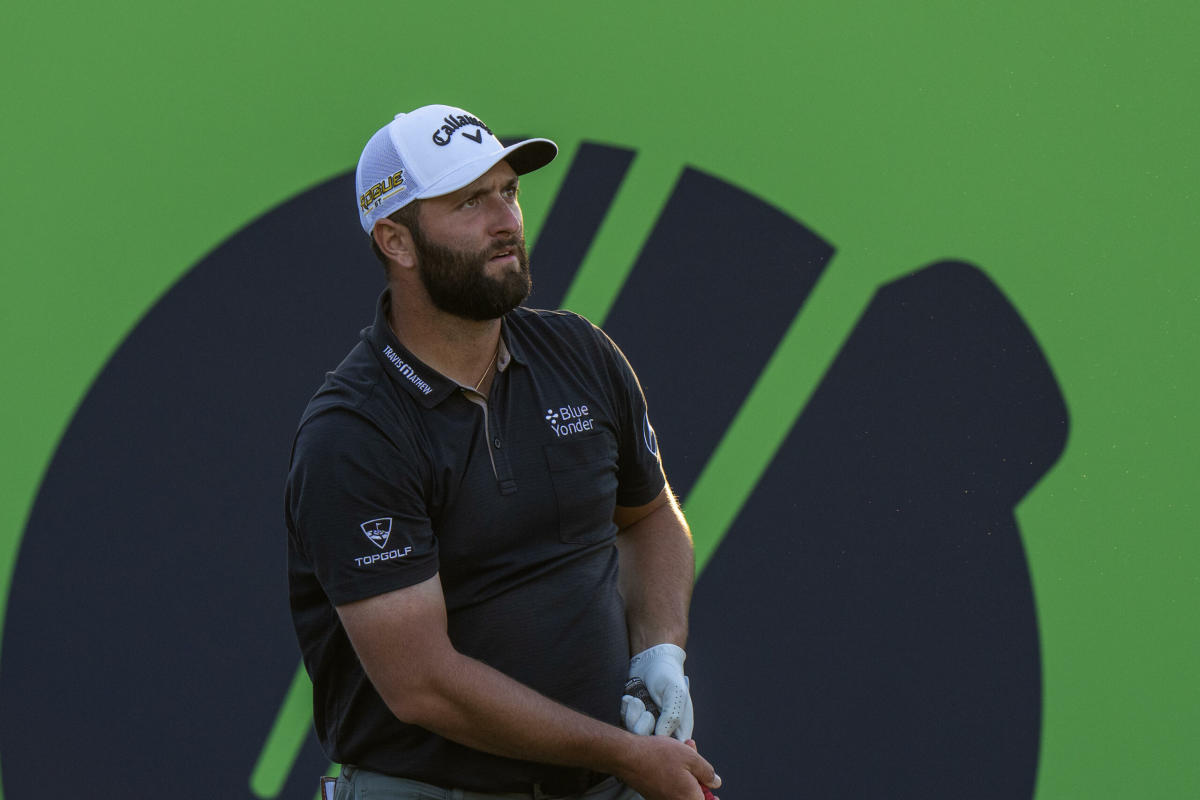 Jon Rahm holed a bunker shot for birdie at 8 and missed holing out from 195 yards for eagle at the par-4 17th by inches.

“We couldn’t really see it, then obviously the crowd let us know,” he said. “That was a really good feeling swing.”

That wasn’t the only one. The 28-year-old Spaniard carded 10 birdies en route to a course-record setting 62 and a share of the 36-hole with Kurt Kitayama at the CJ Cup.

“I saw he was 12 under playing the last, so I was like whoa, just hell of a round out there even with bogey at the last,” McIlroy said. “It wasn’t easy. It’s tricky and the greens are super quick and if you’re just a little off, they can punish you. So yeah, really impressive round of golf.”

Rahm got off to a sluggish start in the opening round, signing for 2-under 69.

“Yesterday was one of those days where I just couldn’t seem to find the center of the face. Lines were good, just wasn’t truly comfortable and it’s hard to score that way,” he said.

Rahm was dialed in on Friday afternoon, making birdies on six of his first 10 holes, including draining a 35-foot putt at 10. For the second straight day, he holed more than 100 feet of putts. A bogey at the last spoiled an otherwise clean card, but of his 62 strokes, he could only think of two that didn’t live up to his high standard. His approach at 8 into the bunker he termed “atrocious.”

“That one on 18 was not good, either. But it’s golf, it is what it is. Usually things tend to even out throughout a round when you’re playing good golf,” Rahm said. “And yes, I made those two mistakes, but I had that hole-out, I made the long putt on 10, the other one on 16. Maybe it was a little one-sided towards the positive side today.”

Kurt Kitayama finds something on the greens

Kurt Kitayama reacts after hitting a tee shot not to his liking on 17 during the second round of THE CJ CUP in South Carolina golf tournament. (Photo: David Yeazell/USA TODAY Sports)

Kitayama, 29, didn’t need to review a stat sheet to know his putting had been abysmal so far this season. In his hometown of Las Vegas two weeks ago, he lost nearly two strokes to the field per round and missed the 36-hole cut. Based on those two measured rounds, he’d rank 195th in Strokes Gained: Putting. But he shot 65 in the final round of the Zozo Championship on Sunday and it has continued through 36 holes at Congaree.

“This week I’ve found something,” he said.

Kitayama improved on an opening-round 66 on Friday, carding an eagle and six birdies for a 6-under 65 and a share of the lead with Rahm.

Kitayama, who is bidding for his first PGA Tour title, overcame bogeys at Nos. 7 and 10. The highlight of the round was holing a bunker shot at 12 for eagle.

“I think it was rolling pretty hot,” he said. “Went in dead center, so that was good.”

The putter has been more friend than foe. He led the field in SG: putting in the first round and ranks third in the field through 36 holes.

“You just get on the green where you can’t read them and start doubting how you putted. This week I feel like I see the line better and can hit a more confident stroke,” he said.

Lowry’s odyssey for his Odyssey

Shane Lowry of Ireland walks on the third green during the first round of the CJ Cup at Congaree Golf Club on October 20, 2022 in Ridgeland, South Carolina. (Photo by Gregory Shamus/Getty Images)

Shane Lowry walks on the 17th green during the second round of THE CJ CUP in South Carolina golf tournament. (Photo: David Yeazell/USA TODAY Sports)

What a long, strange trip it was for Shane Lowry to get a putter for the second round of the CJ Cup after breaking his on the ninth hole on Thursday.

Allow Lowry to explain how he accidentally broke it.

“I was pulling my putter out of the bag, and I pulled it out quite quick and as it came out, it fell. As it fell, I tried to like flick it up with my foot, but like kind of not too like aggressive or anything, just kind of tried, because the shaft was like this and tried to flick it up with my foot and I caught it like right where the graphite meets the steel on those shafts and it just snapped in half,” he explained. “I had to like pick Matt Fitzpatrick off the ground from laughing.”

See also  U.S. Open a reminder of what really matters in golf

No laughing matter for Lowry, who used his lob wedge on the greens for the next two holes until his agent arrived with a Scotty Cameron putter grabbed from the bag of a member. Lowry used it to finish his round, signing for a bogey-free 3-under 68.

Afterwards, he made a 49-mile drive to Bluffton to pick up a replacement.

“Odyssey were very good to me, they sent one to PGA Tour Superstore down in Bluffton, which is like an hour away, so I got in the car after the round and I drove down there, and then I bought another one just to be safe, just to have an extra one there just in case we didn’t get on too well.”

Not to worry. The sub did just fine. (He said he left the one he bought in his locker.)

“New putter was OK. Behaved early on, but then left a few short,” said Lowry, who played his first 32 holes without a bogey and gained more than a stroke on the field on the greens on Friday. “It’s funny when you’re kind of not used to something, but yeah, it was fine, it was good.”

Lowry shot 67 and is tied for sixth at the midway point of the tournament.

Rory McIlroy lines up a putt on the 18th green during the second round of THE CJ CUP in South Carolina golf tournament. (Photo: David Yeazell/USA TODAY Sports)

Rory McIlroy was just trying to keep in shouting distance of Jon Rahm, and he did a pretty good job of it.

McIlroy was stuck in neutral on the front nine making just one birdie at the par-5 fifth, but gave that stroke back with bogeys at Nos. 6 and 8 and was on the verge of shooting himself out of contention when he came alive on the back nine.

“I just felt like I didn’t take advantage of those first five holes only playing them in 1 under. Then once you turn for that tough stretch, 6 through 11 really, it was nice to birdie 10 and birdie 12 to get back to even par from after — basically just making up for the bogeys on the sixth and the eighth hole. And then after 12 I finished really well with a few birdies coming in.”

See also  Davis Love III says LIV Golf needs to say 'we give,' in order for talks with PGA Tour

Did he ever. McIlroy came home in 30 to shoot 4-under 67 and improve to 9-under 133 and just two strokes off the lead heading into the weekend.

“I know if I just keep hitting good golf shots, even the tough holes are birdieable if you hit your ball well enough,” he said. :There’s plenty of chances out here.”

Scottie Scheffler lines up a putt on the third green during the second round of the CJ Cup at Congaree Golf Club on October 21, 2022 in Ridgeland, South Carolina. (Photo by Gregory Shamus/Getty Images)

World No. 1 Scottie Scheffler struggles on the greens continued during the first round of the CJ Cup. Despite swapping one Scotty Cameron model for another this week, Scheffler wasn’t happy with his performance on the greens on Thursday. He took 31 putts, lost nearly a stroke and half to the field and was the main culprit for shooting even-par 71. After the round, Scheffler went straight to the practice putting green to try to iron out his stroke until darkness set in.

It paid quick dividends. Scheffler charged out the gate with four straight birdies. He cooled off, making only one more birdie – No. 12 – but dropped shots at Nos. 10 and 16 and shot 3-under 68. He needed 31 putts again but lost less than half a stroke to the field on the greens. Through two rounds, Scheffler ranks 59th of 78 golfers in Strokes Gained: putting.