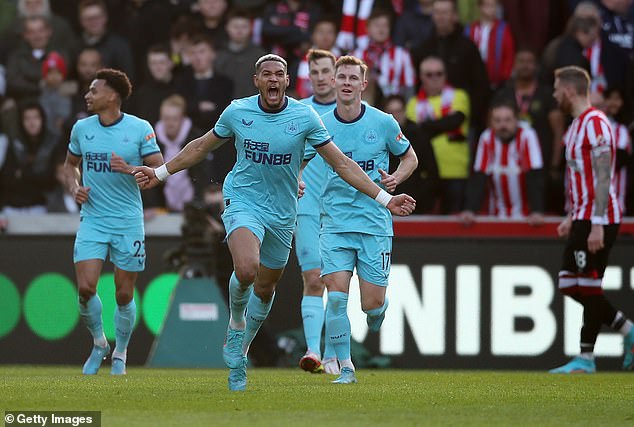 Christian Eriksen lingered on the pitch after the whistle and savoured that feeling once again. His team had played most of the game with 10 men, lost and been plunged deeper into the relegation mire but he was in no hurry to disappear into the tunnel.

Instead, he stayed out to soak up the occasion. Gazing up into the emptying stands, he offered his applause as thanks for the support and they reciprocated with applause in admiration for his courage and determination.

It was so good to see Eriksen back on the pitch, such a thrill to see him come off the bench in the second half to complete one of football’s great personal comeback stories, and it is nice to know the ball still answers to his commands. 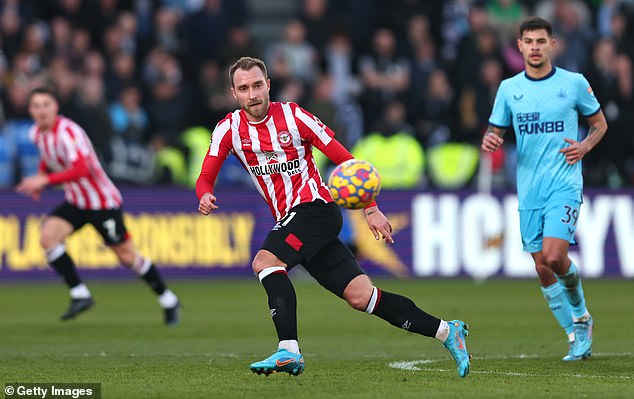 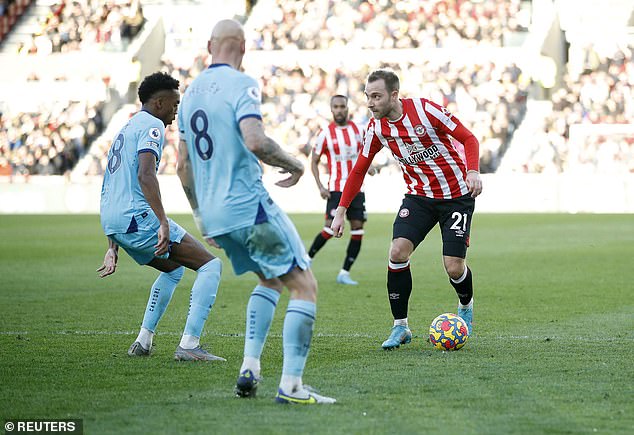 Eriksen replaced Mathias Jensen in the 52nd minute. They embraced fleetingly as they crossed in a typically understated Scandinavian exchange but the Danes will have been acutely aware of the significance.

Jensen was the substitute sent on to replace Eriksen after the distressing scenes following his cardiac arrest in Copenhagen’s Parken Stadium during Denmark’s opening fixture of Euro 2020, against Finland.

‘Gone from this world for five minutes,’ was the way Eriksen summed it when he arrived in London last month and, 37 weeks after that harrowing Saturday evening in June, he returned to competitive football on a crisp February afternoon by the River Thames. 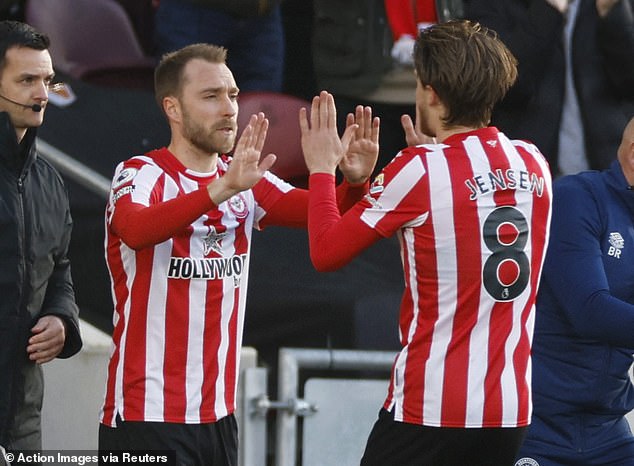 On he trotted, wearing the number 21, and the home and away fans stood to greet him. ‘For everyone involved in football it was a big moment,’ said Brentford boss Thomas Frank. ‘It was a brilliant reception and a big moment for Christian and his family, and nice to see.’

Newcastle boss Eddie Howe said: ‘I’m normally tunnel vision on the touchline, but I was thankful to see him back on a football pitch. It was very emotional for him and for Brentford and great to see our players and fans share in that.’

There was a ‘welcome back’ hand-slap from Newcastle’s Ryan Fraser as Eriksen settled into the right side of Brentford’s midfield trio and set about helping his new team, who were already down to 10 men and trailing 2-0.

His first touch was a reminder of his impeccable control in a tight space, and a short pass found a teammate in red-and-white. His quality remains clear even if there were, of course, times when he looked like a player short on rhythm. And it must have felt like old times when he became locked in a protracted disagreement with referee Mike Dean in the closing minutes, which was extended after the final whistle. Some things don’t change.

Dean’s early red card had already shaped the game. Brentford played with 10 men from the 11th minute, when VAR Darren England advised the ref to check a clumsy challenge by Josh Dasilva on the monitor.

There had been no foul awarded, initially, but replays clearly showed Dasilva needlessly high, over the ball, catching Matt Targett high on the ankle. 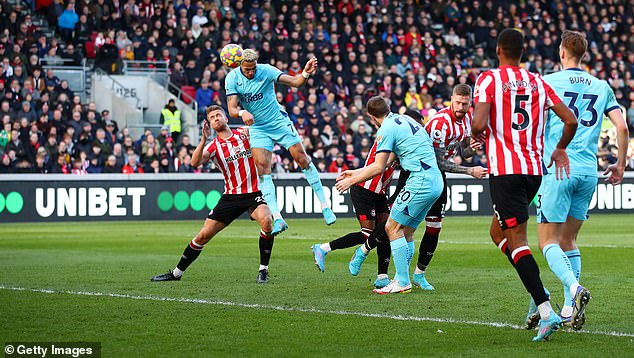 Dasilva, making his first home start after almost a year out with a hip injury, was dismissed. ‘We feel it was a bit unfair to play 10 against 11 for 80 minutes,’ said Frank. ‘I’m not saying it’s not a red card but it’s such a random situation. I understand if he’s flying in, kicking someone down.’

Newcastle took control and should have taken the lead when Fraser picked out Chris Wood at the back post. David Raya saved Wood’s header and, moments later, denied Targett but was beaten by Joelinton, just after the half hour.

Fraser delivered again from the left and Joelinton leapt above Kristoffer Ajer and headed in his second of the season. 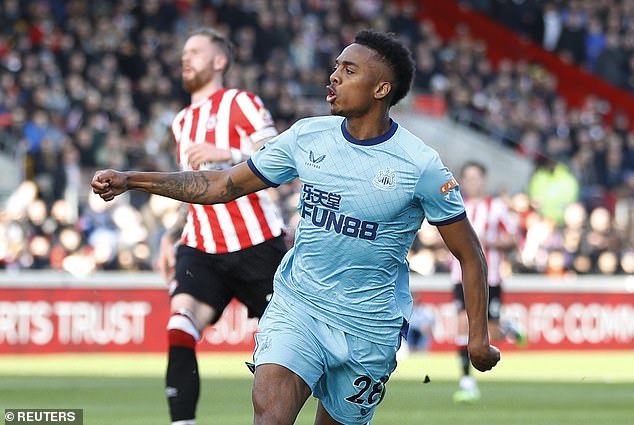 His first also came against Brentford, in November, and he sprinted alone the length of the pitch to celebrate with the away fans, who responded by chorusing the Brazilian’s name for the next 10 minutes as Raya worked wonders to keep Newcastle at bay until, just before half time, Fabian Schar sprang out of defence and set up Joe Willock for the second

Eriksen’s introduction lifted Brentford spirits but there was no way back into the game.

Newcastle climbed above their hosts, a little further from relegation trouble. Brentford are sliding at an alarming rate. They have taken only one point from eight games but Eriksen is with them now and he knows something about survival. 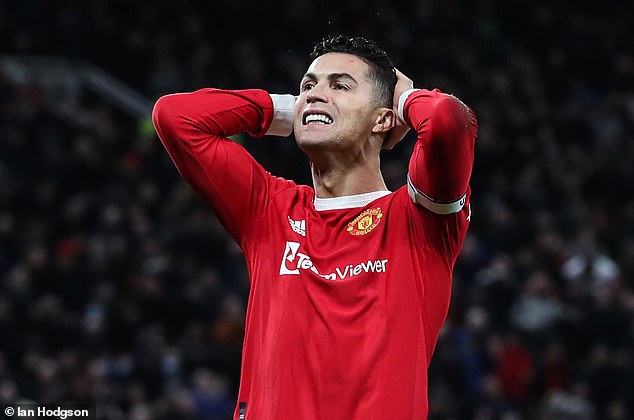 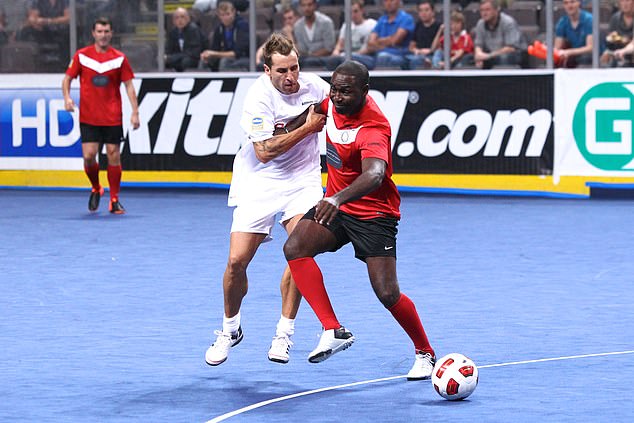 As Masters football makes a TV comeback, how could the past Premier League stars line up?