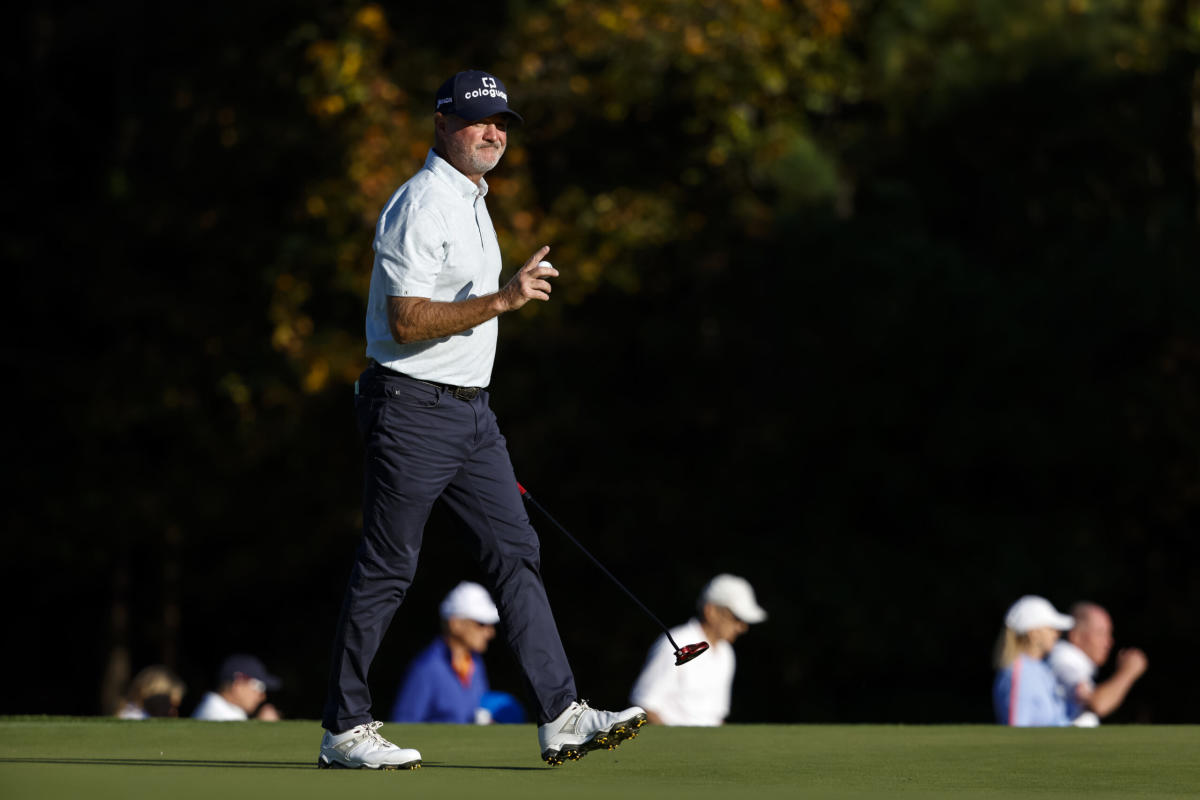 The race for the Charles Schwab Cup Championship is officially underway.

Jerry Kelly rode seven birdies Friday to post a 7-under 65 to open the first tournament in the three-event PGA Tour Champions postseason.

The top 72 players in the regular-season standings qualified for the 2022 Charles Schwab Cup Playoffs, but four players chose to skip the first event for various reasons. That includes Fred Couples, who shot a 60 in the final round of the regular-season finale last Sunday. Joining him on the sidelines are Steve Stricker, Brandt Jobe and Mike Weir.

Kelly avoided bogey over the first 18 holes Friday at the Dominion Energy Charity Classic at the Country Club of Virginia in in Richmond, Virginia, on Friday. Kelly has three wins this season; a fourth would tie Steve Stricker for the 2022 Champions season high.

“I love great starts, but that’s all they are is great starts. I’d love to be in the lead and have a great finish, that would be really cool,” Kelly said. “As long as I can stay in position, it’s just trying to close it out on Sunday.”

Kelly is not the longest hitter on tour and was faced with using his 3-iron a couple times Friday, but he’s good with that.

“You’re kind of hoping it messes with them,” he said of his longer-hitter playing partners, Steven Alker and Padraig Harrington. “If I can get my 3-irons inside of their 8-irons, it makes me feel pretty good. I don’t mind going first, I don’t mind putting that pressure on them. Yeah, it’s a game within a game, no doubt.”

Joe Durant, Bob Estes, Glen Day and Miguel Angel Jimenez are all tied for second at the Dominion after they each fired 5-under 67s.

Jimenez has three wins in 2022, but Durant hasn’t won on the Champions tour this season and neither Estes and Day have ever won on the circuit.

Bernhard Langer, a two-time defending champion at the Dominion, shot a 4-under 68 and is tied for sixth. He is seeking a seventh Schwab Cup title.

Steven Alker, who finished No. 1 in the regular-season standings, shot a 3-under 69 and tied for 15th.

From here, the field will be cut to 54 for the TimberTech Championship at the Royal Palm Yacht & Country Club in Boca Raton, Florida, Nov. 4-6. Then, the top 36 move on to the season finale at Phoenix Country Club for the Charles Schwab Cup Championship, Nov. 10-13.

Who’s in, who’s out (Fred Couples), what’s the format and more for 2022 Charles Schwab Cup Playoffs