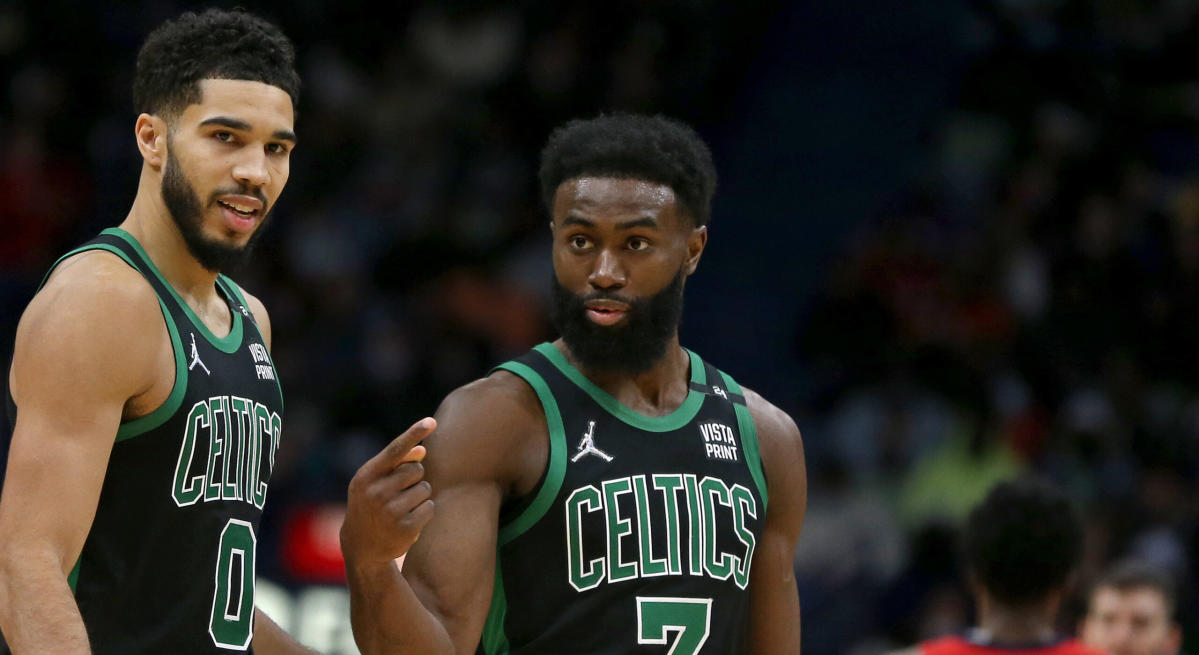 With things on the NBA trade market at a standstill, there is still plenty of scuttle to discuss, as the rumors are hot and rampant regarding some of the biggest names in the Association.

The most important players still being discussed include Kevin Durant, Kyrie Irving and Donovan Mitchell.

To get all of the latest details, just scroll below, as we discuss the five players who have appeared most often in trade rumors over the past week, as seen on our Trade Rumors page.

There hasn’t been much outside of speculation on the Russell Westbrook trade front this week, with one Los Angeles reporter speculating that the start of training camp, a mere six-or-so weeks away, might be a soft deadline for the Lakers to trade their ill-fitting point guard:

Now, to the second question, there will come a time in which the Lakers have to decide if they’re willing to continue to play hardball and risk missing their window to trade Russell Westbrook. There is a sense among some that training camp is a soft deadline to move Westbrook. If he’s on the roster in late September, there will be a massive off-court distraction, with the media asking about his future, his relationship with James and the organization, Ham’s vision of his role and responsibilities.

There was also a report from our very own Michael Scotto which discussed a potential blockbuster deal featuring Westbrook, the Utah Jazz and the New York Knicks:

The Lakers had conversations about joining the Jazz and Knicks a few weeks ago in a potential three-team trade, league sources told HoopsHype. The proposed three-team trade scenario included Russell Westbrook going to Utah and getting bought out. Utah would send Donovan Mitchell to the Knicks, a combination of two players, including Patrick Beverley and Jordan Clarkson, Bojan Bogdanovic or Malik Beasley to the Lakers, and the Jazz would receive significant draft pick compensation from the Knicks and Lakers. The Knicks also would’ve had to part with veteran salary filler(s), such as Derrick Rose to help make the salaries work

In all, it’ll come down to how much draft capital the Lakers are willing to part with to get rid of Westbrook.

It appears that despite the hugely successful season the Boston Celtics just had, Jaylen Brown is still being discussed in trade talks, though, in fairness, it isn’t for any old player but for former league MVP, Durant.

According to The Athletic, Boston’s theoretical package for Durant features Brown as its centerpiece:

The Celtics, Toronto Raptors and Miami Heat remain the most significant candidates to acquire Durant, sources said, with Boston’s package centering around All-Star forward Jaylen Brown seen as a viable deal. Tsai and the Nets have made clear privately that they will take every last asset from a team that trades for Durant, sources said.

That might not be enough for Boston to land Durant, however, as, according to another report, the Brooklyn Nets originally asked for both Brown and Jayson Tatum in trade talks for the future Hall-of-Fame wing:

Boston has been considered a potential landing spot in large part because the Celtics are better positioned than most to offer an enticing package. But there are limits. According to the source, Brooklyn initially tried to pry both Jayson Tatum and Jaylen Brown from Boston in a Kevin Durant trade. That proposal went nowhere, of course. The source confirmed recent reports that Brooklyn later shifted its focus to a deal centered on Brown, Marcus Smart, and a massive haul of future first-round draft picks. But the Celtics were not interested.

The Nets likely aren’t serious with that trade request and are likely biding time in hopes that Durant will reverse course and decide to stay in Brooklyn.

It should come as no surprise, but this week, a report on the Mitchell trade front contended that the Knicks remain the strongest frontrunner for the star 2-guard based on what the Jazz reportedly want for Mitchell: a lot of draft assets.

That’s according to The Athletic, at least:

The Jazz want five or six or seven first-round picks, as well as young players. The Knicks own all of their firsts as well as four from other teams: the Wizards’ in 2023, the Detroit Pistons’ in ‘23, the Dallas Mavericks’ in ‘23 and the Milwaukee Bucks’ in ‘25. All of those are protected. They can deal up to eight first-rounders, including up to four unprotected ones.

Regardless, Tony Jones, who covers the Jazz for The Athletic, said this week that he doesn’t think a trade between the Knicks and Utah is imminent:

When could we see a potential trade between the Jazz and Knicks for Donovan Mitchell? Tony Jones: Jones: The sense I get right now is it’s probably not going to happen on an imminent level. The two sides aren’t close. To me, I think if it’s going to happen, it’s going to happen closer to training camp or the start of the season. If it doesn’t happen then, we’ll see what happens closer to the February trade deadline. It’s one of the reasons why the Jazz haven’t made a lot of moves around their roster. Mitchell is a domino that has to be taken care of one way or the other. If the Jazz trade Mitchell, then it’s going to make sense to go younger. Then, I’d expect more moves on top of that.

We’ll see how long this staring contest between the Jazz and Knicks lasts, or if another team swoops in and takes Mitchell from Utah.

See also  Who wins the East? Can LeBron James get Lakers into playoffs?

This past week, there has been a whole lot of tomfoolery regarding Irving and the possibility he gets traded, with Irving and his camp flat-out refuting two reports that came out about him.

First, the New York Post reported that Irving ‘hates’ Sean Marks and Steve Nash, the team’s general manager and head coach, respectively, thinking the former is bad at his job and the latter, terrible.

Irving then came out, via his agent (who is also his step-mother) and straight-up said that was not the case:

Nets star Kyrie Irving wants to make it clear he does not hate coach Steve Nash or general manager Sean Marks despite what a source told The Post about his feelings Monday. “I am not sure where this narrative is coming from but Kyrie does not hate Steve nor Sean. That’s not a part of his being nor how he represents himself in the world. He’s about peace, love and acceptance,” his agent and stepmother Shetallia Riley Irving told The Post.

Then, Ric Bucher reported that Irving wants an extension, one that will allow him to play in 60 or fewer games per season, believing anything over that number of games to be inhumane.

The only real reporting on the Irving trade front this week came from Shams Charania, who said that Irving’s plan remains to be a Net this upcoming season:

Which brings us to his teammate.

There were some interesting items reported about Durant this week, with the most noteworthy coming from Charania and The Athletic, who dropped a bomb on us, stating that Durant had informed Joe Tsai, owner of the Nets, that it was either the team trades him or they fire Marks and Nash to keep him:

In a face-to-face meeting with Brooklyn Nets owner Joe Tsai over the weekend, All-NBA star Kevin Durant reiterated his trade request and informed Tsai that he needs to choose between Durant or the pairing of general manager Sean Marks and coach Steve Nash, sources tell The Athletic. Durant stated he does not have faith in the team’s direction, sources said.

Although that seems like an easy decision for Tsai to make considering Nash’s coaching, or lack thereof, since being hired by Brooklyn, that does not appear like the path the team’s owner will be taking based on his tweet the evening following that report:

See also  Marcus Smart is going to play his game vs. Steph Curry

So Durant remains up for grabs.

Later in the week, SportsNet New York added that the Celtics and Philadelphia 76ers are now among the teams Durant sees as preferred trade destinations:

Finally, Marc Stein reported that league execs are speculating that the me-or-them demand by Durant to Tsai was actually a plot to get the Nets to lower their asking price for the 12-time All-Star:

There is a growing belief among rival teams that Durant knew when he issued that me-or-them ultimatum that Tsai had no intention of yielding to the request and firing Marks and Nash. One resultant theory that the Durant/Tsai meeting spawned is the idea KD has begun trying to manufacture as much behind-the-scenes discord as he can in hopes that it will lead the Nets to lower their asking price and trade him out of exasperation.

That would be quite the interesting move by Durant and Co., but crazier things have happened in the NBA.

We’ll see what happens but for now, it doesn’t appear we are any closer to a Durant trade.