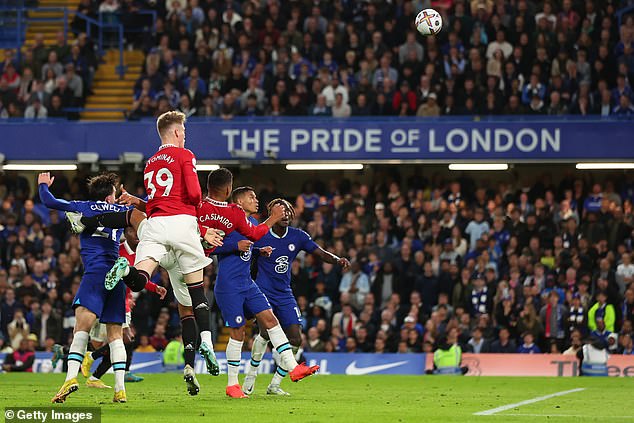 Manchester United scored a late equaliser to earn a share of the points against Chelsea at Stamford Bridge on Saturday in a game that underwhelmed for its majority.

In an intense tactical battle, Blues boss Graham Potter blinked early by hooking Marc Cucurella before half time to change the system, before both managers made cautious changes as players tried to grow into the game.

Jorginho’s penalty was cancelled out by Casemiro late on, ensuring United stay fifth in the Premier League table, one point behind Chelsea in fourth.

Sportsmail’s Sami Mokbel rated both teams’ players after the game.

Kepa – Made a clutch of important saves in the to keep United at bay and was incredibly unlucky with their last-gasp equaliser after being unable to claw the ball to safety. 7.5

Trevoh Chalobah – A few loose moments but largely sound in defence for Chelsea. Quietly went about his business and hit the bar. 7

Thiago Silva – Used all his experience to keep Rashford’s threat down to a minimum. Definitely worth another contract. 7

Marc Cucurella – Lasted 36 minutes before being sacrificed in place of Mateo Kovacic to accommodate a change in system. 6 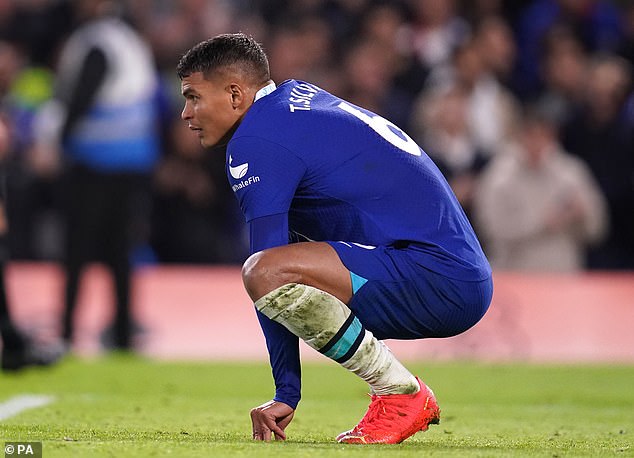 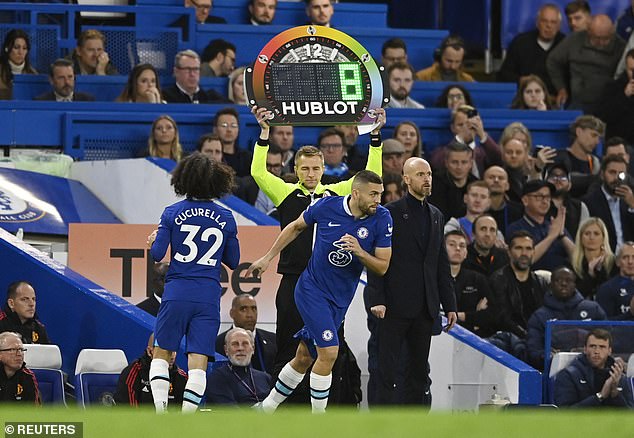 Jorginho – Struggled to get a foothold in midfield before Potter made a tactical switch in the first-half. More assured after that and notched from the spot. 6.5

Ruben Loftus-Cheek – Looks to be back to his best. Carried the ball forward with strength and purpose. Will be catching Gareth Southgate’s eye, for sure. 7

Ben Chilwell – Getting stronger as the season grows. One pass to set-up Aubameyang was particularly easy on the eye. Returning to form. 6.5 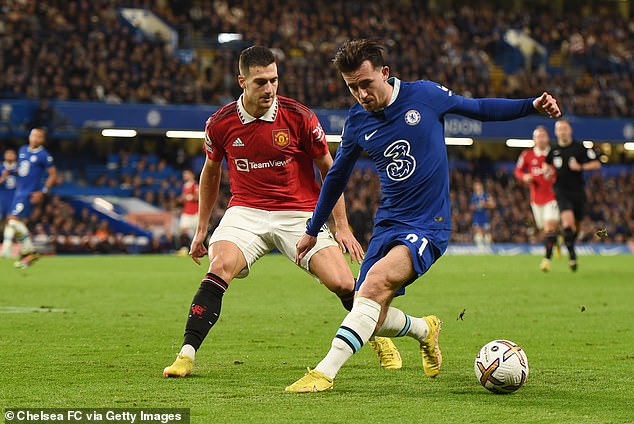 Mason Mount – Plenty of desire and effort with quality to boot. Looked the most likely to unlock United’s defence. 7.5

Pierre-Emerick Aubameyang – Back in the team and was presented with Chelsea’s best opportunities without taking them. 6.5

Raheem Sterling – His running and directness was a thorn in United’s rearguard but end product not up to his usual standards. 6.5

Graham Potter: His team were second best for much of the game – but the manner of United’s late leveller will be like a dagger to his heart. 6.5 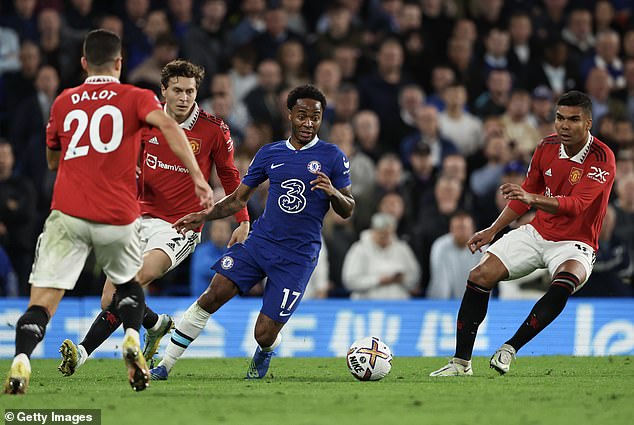 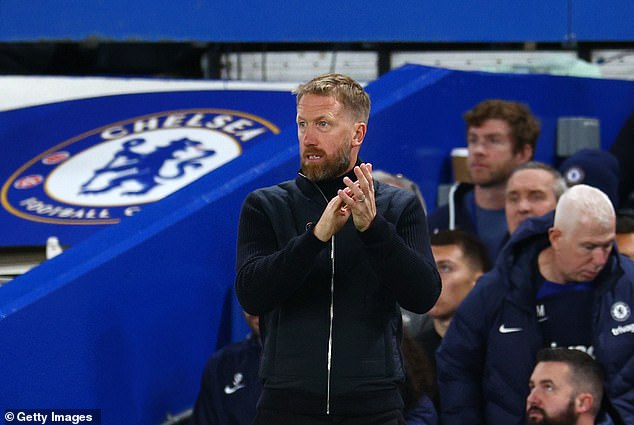 David de Gea – Had very little to do in United’s goal but pick out Jorginho’s penalty as his defence managed to keep Chelsea at arms length. 6.5

Diogo Dalot – A sturdy display from the right-back. Was disciplined and tough in defence and supported attacks when he could. 6.5

Raphael Varane – Left the pitch in tears after sustaining an injury that – judging by the France international’s reaction – will rule him out of the World Cup. 7 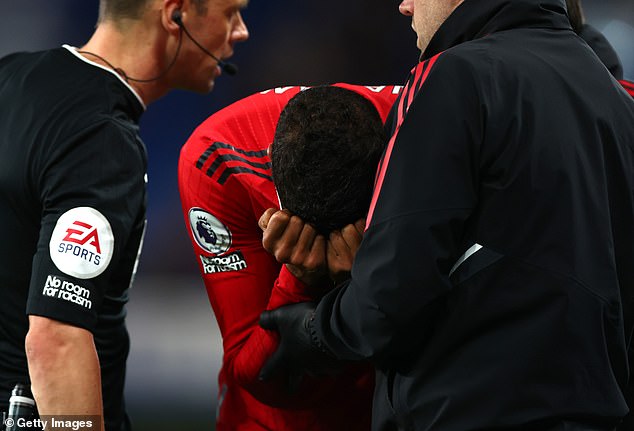 Raphael Varane left the field in tears, and injury could now rule him out of the Qatar World Cup

Lisandro Martinez – Has acclimatised to the rigours of English football superbly. Unruffled, even when the opposition tried to rattle him. 7.5

Luke Shaw – Another solid display at left-back for the England international. Finally getting a run of games. 7

Casemiro – Wasn’t daunted by what was his sternest test since arriving from Real Madrid and topped an excellent display with his first goal for the club. 8 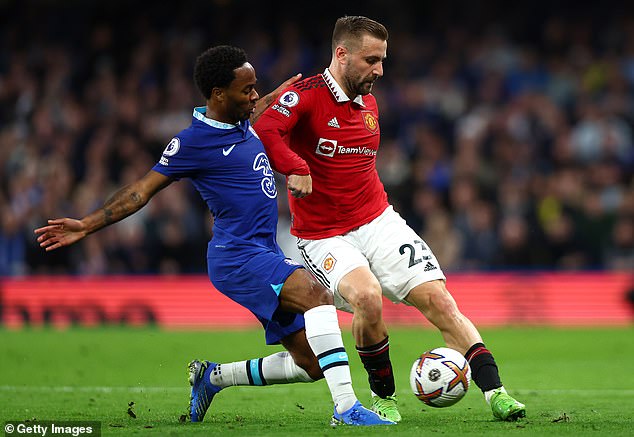 Luke Shaw (right) is now getting a run of games, which is good for both club and country 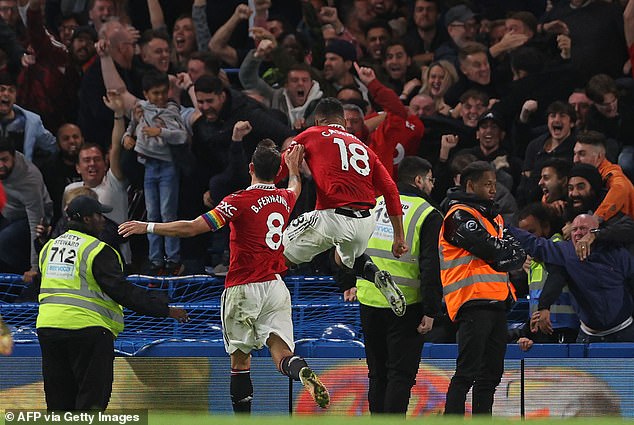 Antony – A bright spark for United but squandered a glorious chance at the end of the first half. A real threat. 7

Bruno Fernandes – A frustrating night for the Portugal international. Had a couple of decent openings but couldn’t unlock the door. 7

Jadon Sancho – Ineffective and substituted after 52 minutes. Can have no complaints – this was a blow to his World Cup hopes. 5.5 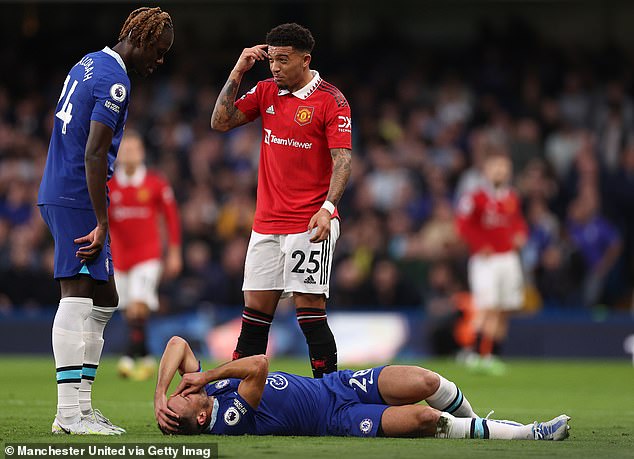 Marcus Rashford – Showed willing to but not enough to convince Ten Hag he can be United’s regular centre forward. Wasted an excellent chance in the first half. 6

Erik ten Hag: His team got no more than they deserved. His players showed fantastic fighting spirit to com back from the death. 7