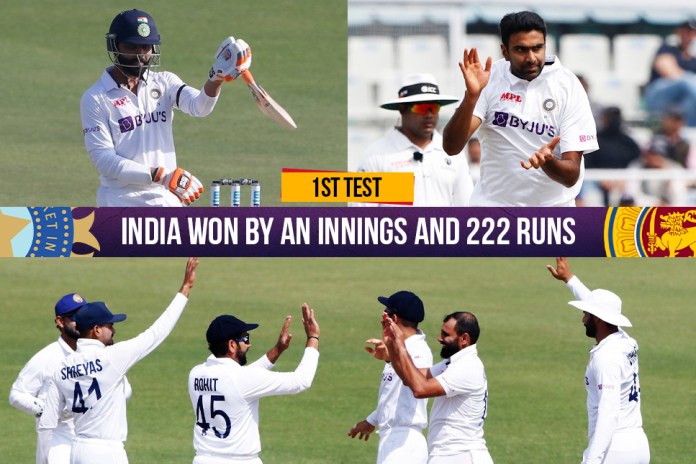 IND beat SL Highlights: – Ravindra Jadeja starred with both bat and ball as India clinched a massive win on Day 3 of the IND vs SL 1st Test. Jadeja scored an unbeaten 175 and picked up nine wickets in the match as India clinched a big innings and 222 runs win. The victory meant that India have now taken a 1-0 lead in the series. Follow INDIA vs SRILANKA Test Series LIVE Updates with InsideSport.IN

India Mauls CLUELESS SriLanka: Hosts beat visitors by an innings and 222 runs as Ravindra Jadeja and Ravichandran Ashwin bagged four wickets in 2nd innings here at the Punjab Cricket Association IS Bindra Stadium, Mohali on Sunday to take an unassailable 1-0 lead in the two-match Test series.

Ashwin is now ninth in the list of all-time highest wicket-taker in Tests.

Five balls later Sri Lanka lost Angelo Mathews for 28 to Ravindra Jadeja’s leg before wicket and then two balls later Suranga Lakmal hold out by Jayant Yadav in mid-on without troubling the scorers.

Ravindra Jadeja’s SUPERSHOW Derails Sri Lanka: The match as a contest was over on the first day when India scored 357 and then piled on Sri Lanka’s misery with Jadeja toying with a depleted bowling attack.

It is after 60 years that an Indian has scored 150 runs and taken five wickets in an innings. Vinoo Mankad, in 1952 against England at Lord’s, and Polly Umrigarh in 1962 versus West Indies at Delhi, are the other owners of this rare feat.

If that wasn’t enough, India got as many as 16 wickets on the third day to wrap up the match with a cumulative bowling effort of 125 overs across two innings.

@9:15 AM: Pathum Nissanka and Charith Asalanka will resume Day 3 proceedings for Sri Lanka.

We are inching closer to the LIVE action 👍 👍#TeamIndia | #INDvSL | @Paytm pic.twitter.com/ULA56KgYLK