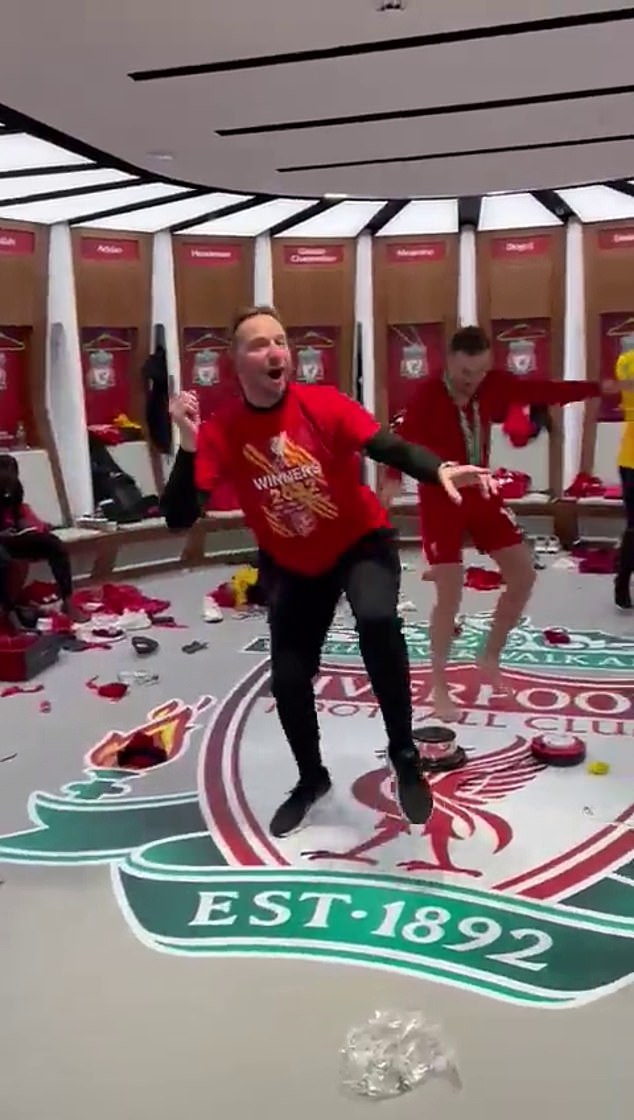 Van Dijk poses with the trophy and his man of the match gong, Robertson jokes Henderson thought he’d MISS his penalty and assistant Lijnders gets the party started in the dressing room… Inside Liverpool’s Carabao Cup final celebrations at Wembley

Liverpool players and staff have been celebrating their Carabao Cup win over Chelsea at Wembley on Sunday.

The Anfield side were victorious after Kepa Arrizabalaga, who was substituted late on for the shoot out, missed the decisive spot kick in a remarkable shoot out that ended 11-10.

With the win, Liverpool regained that title as the club with most League Cup crowns having seen Manchester City draw level with them in recent years. 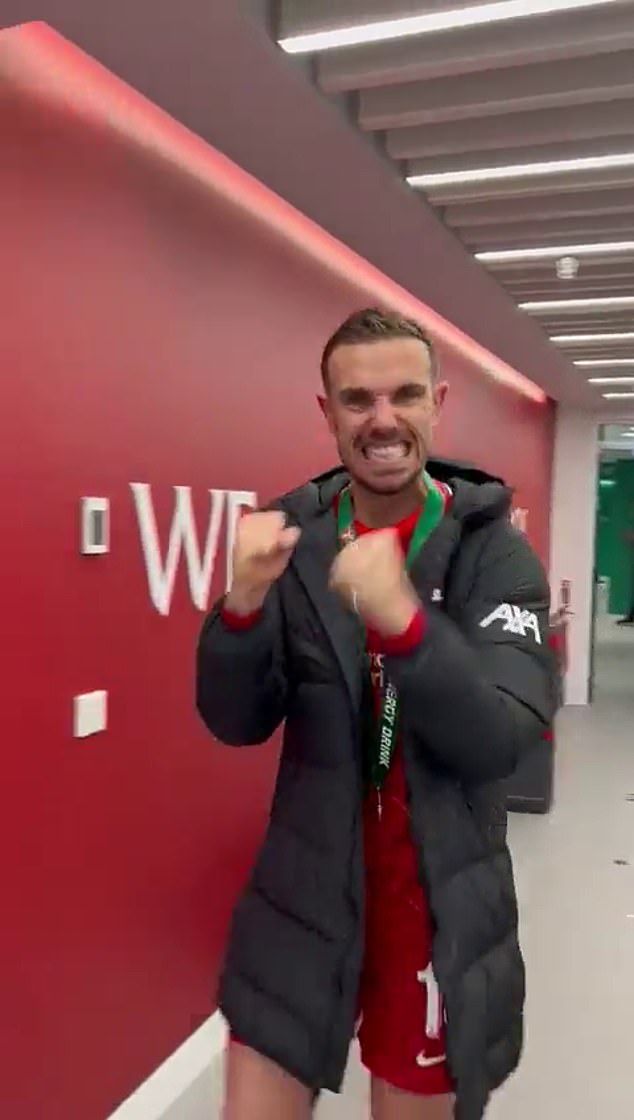 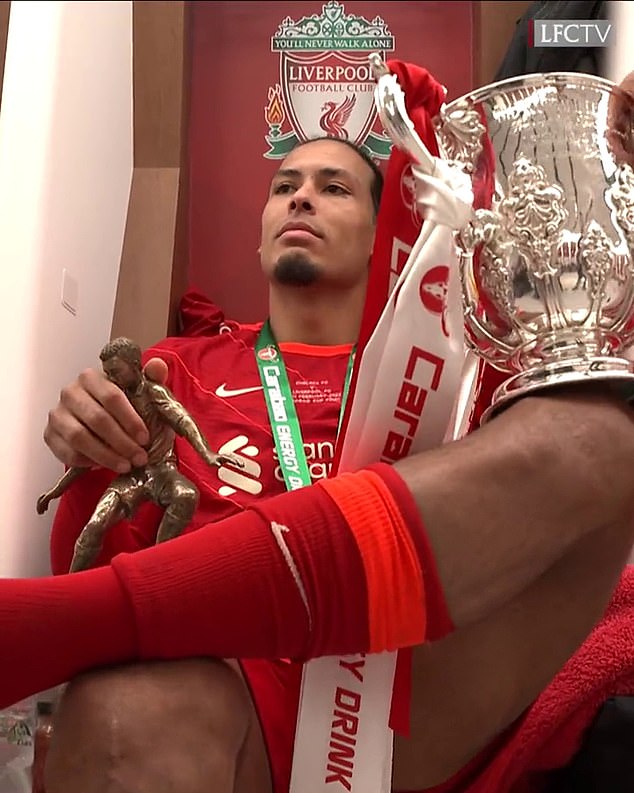 Having not won the three-armed trophy since 2012, this was the first League Cup winners medal for many of the players and they have been enjoying their celebrations.

In videos shared to social media, fans have been able to see how the squad and staff have been celebrating the win.

The party seems to have been started by an unlikely source with Jurgen Klopp’s assistant Pep Lijnders leading a mass dance in the dressing room.

The 39-year-old is seen dancing across the room to GALA’s Freed from Desire and having initially only been joined by Andy Robertson and club captain Jordan Henderson, it is not long until nearly the whole squad has joined in.

The League Cup trophy is placed on the floor as the players and staff dance round it before reserve goalkeeper Adrian starts waving it in the air.

Some players liked to play it cool though and that included Virgil van Dijk who picked up the man of the match gong for his performance.

The Dutch international, who joined in 2018 and has won five major trophies since, posed in his seat with his man of the match trophy as well as the cup itself.

Some jokes were shared between the squad in particular with Henderson and Robertson. As the club captain returned to dressing room, he high fives Robertson before the full-back asks if he ‘backed’ him to score in the shootout.

Henderson hesitates to which Robertson, who did score in the shootout, points and says ‘ah he didn’t back me!’

The skipper brushes off the doubt and says ‘of course I backed you!’

It’s an honour to lift this trophy 10 years on. Special shout out to every young player that has played along the way, your a credit to this club ❤️ pic.twitter.com/XNrz1YTv83

Henderson was one of few players still at the club since Liverpool last won the trophy and he described it as an ‘honour’ to lift it again 10 years later.

Club veteran James Milner tweeted he was  ‘Buzzing they’re going to have to re-decorate the Champions Wall again.’

Ibrahima Konate, who partnership van Dijk in Liverpool’s defence, celebrated his first trophy with the club.

One more title to this group that works a lot for it. Let’s go for more. Always for more! All glory to God! 🙏🏽👊🏾 pic.twitter.com/1fuoFeVBqd

Fabinho showed the kind of ambition the squad has and urged his team to go for more.

Liverpool manager Klopp paid tribute to Caoimhin Kelleher, the No 2 goalkeeper who hit the decisive spot-kick, shortly before the party got going at Wembley.

‘Alisson Becker is the best goalie in the world for me,’ said Klopp. ‘There are other good goalkeepers out there but this goalie is absolutely insane.

‘But to be honest for me Caoimhin Kelleher is the best number-two goalie in the world as well. 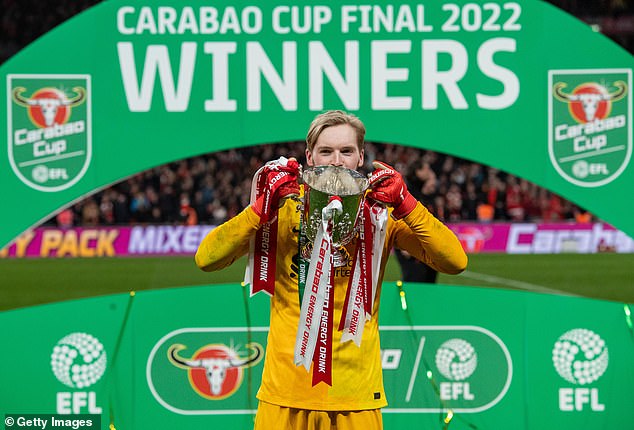 ‘The game he played tonight was absolutely incredible. I can remember at least two incredible saves, and probably there were more.

‘So he proved that the decision to line him up was absolutely right. And then in a very spectacular penalty shoot-out he showed the whole range of his skill set.

‘He finished one off with his really skilled feet. So top class.