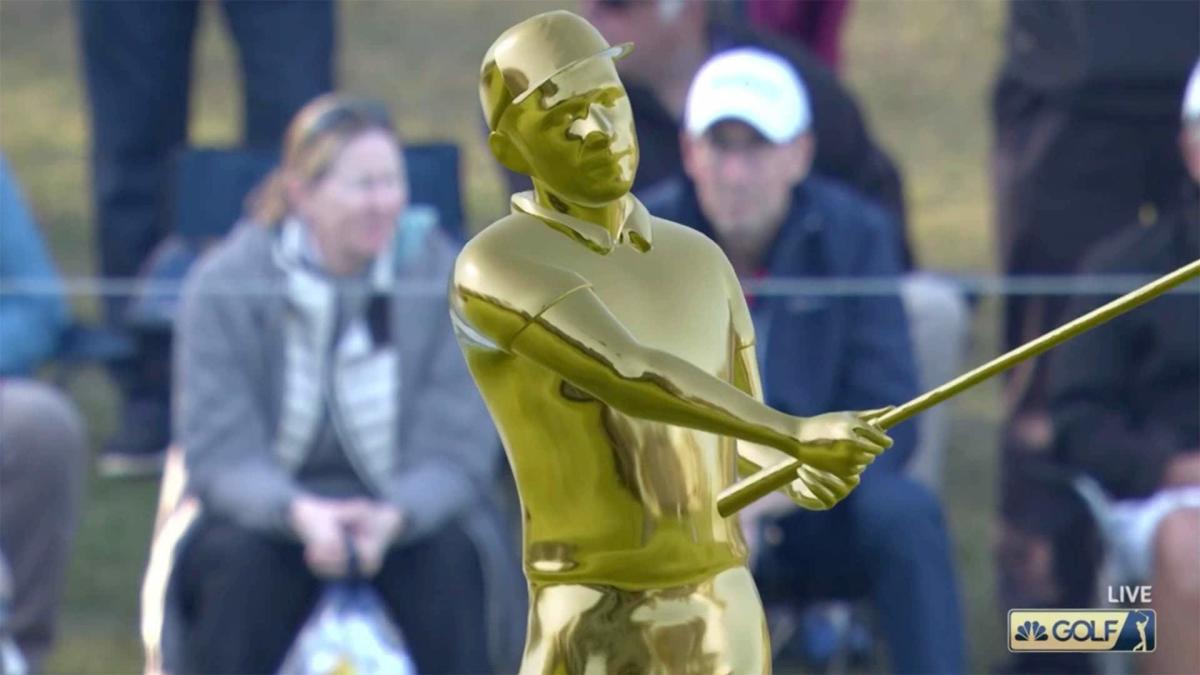 Someone will eventually lift the 2022 Players Championship trophy on Monday evening, but there is already a winner at TPC Sawgrass: the trophy itself.

Yes, the trophy topper turned mixed-reality star has captured the hearts of viewers around the globe. Sure, not everyone is a fan of Gold Man – PGA Tour pro Dylan Frittelli, in response to one of the Tour’s Instagram posts about Gold Man, commented, “Why are we spending money on this? Someone needs to answer to this terrible decision.”

But it seems like for the majority, Gold Man – or Gold Boy as some super fans call him – is 24-karat magic.

“He became his own person this week,” said Andrew Isaacson, executive vice president of The Famous Group, which is responsible for Gold Man’s creation. The group, which was behind several of the NFL’s mixed-reality projects (i.e. flying Raven, terrorizing Panther and Nickelodeon’s second-screen game experience), was hired by the Tour to celebrate and recreate some of the tournament’s biggest moments with a mixed-reality twist.

“He came to life, born of the physical Players Championship trophy, meant to be an amalgamation of all past champions,” Isaacson added, “but over the course of this week he developed a personality of his own.”

Gold Man’s gleaming debut came during NBC’s broadcast of Thursday’s opening round, when he hit a tee shot into the middle of the 17th green. The golden unveiling was the result of a three-month-long process that included a Lidar scanning of the hole in late January and the implementation of swings from several Players champs to give Gold Man is own unique action. Golf Channel analyst Brandel Chamblee later analyzed that swing on Twitter.

Though reactions were initially lukewarm, they were quick to smelt. Soon, a swell of social-media support overcame Golf Twitter. The new cult hero was immortalized via meme and Photoshops. He highlighted discussions on popular golf podcasts. He even got his own tracker, @playersgoldman.

“There was some great stuff that came out of this activation,” said Isaacson, who got into the action by writing Gold Man’s name on a golf cart and parking it near the 17th tee box.

The content included a late audible by the creators on Friday. As heavy rains suspended play, Gold Man quickly broke out his golden squeegee to help with the cleanup.

“We were sitting here Friday morning and we’re like, ‘All right, we’re definitely not playing golf, so what can we do with him?'” said Adam Berger, mixed reality producer at The Famous Group. “We saw the squeegee guys out there and we’re like, ‘Yes, he needs a squeegee.'”

Unfortunately, with weather disrupting play, the flashy figurine was shelved on Saturday. Berger said an alternate plan for Saturday was to give Gold Man a net and have him wade into the water to fish out golf balls, but they ran out of time. Plus, the technology relies on a stable camera, and 35 mph winds didn’t lend themselves to a safe and effective environment for Gold Man.

“Every superhero has his Kryptonite, and Gold Man’s is wind,:” Isaacson said. “And obviously, he came roaring back on Sunday.”

With many on social media wondering what had happened to the reflective heartthrob, Gold Man indeed returned in a big way for Sunday’s marathon day. He appeared on a few leaderboard graphics before heading back to the island green to recreate Tiger Woods’ iconic “Better than Most” putt from the 2001 Players. (Peeling back the curtain, Isaacson described a 20-minute scramble to match up the putt with Saturday’s actual hole location, which was about 4 feet from the one 21 years ago.)

Even better, as Gold Man did his best Woods impression, Woods was shown watching the reenactment on a tablet.

“That was the proof of concept for us,” Berger said. “Tiger approves, and that’s as good as it gets in the golf world.”

Finally on Monday, Gold Man put on a golden flat bill and successfully took on Rickie Fowler’s memorable shot on No. 17 that won Fowler a playoff at the 2015 Players.

Naturally, with the success of Gold Man, one would expect the Tour to implement a mixed-reality component at future events. Imagine a copperhead snake coming to life and slithering around Innisbrook at this week’s Valspar Championship. Or a deer driving a tractor down the fairways at TPC Deere Run during the John Deere Classic. Or a second-screen experience at tournaments similar to what the NFL did with its Nickelodeon broadcast.

Perhaps, Gold Man can face off against Putter Boy in the next “The Match,” as Pinehurst Resort jumped in on the conversation and claimed that Gold Man had nothing on its little master of the greens.

Isaacson teased potential activations down the road, including at the Presidents Cup.

As for Gold Man, Isaacson said he’s likely done for the week – sans a potential shoutout in Monday evening’s broadcast sign-off. In what they call “Good Night,” Gold Man is set to climb back onto his pedestal until next time.

And when will that next time be? Who knows, but after Gold Man’s breakout at The Players, Isaacson anticipates this week won’t be the swinging sensation’s one shining moment.

“The Tour now has a character that they’ve never had before, someone that potentially could reach a different audience,” Isaacson said. “I’d be curious to see what they do with it after this week.”

Here’s to hoping it’s not goodbye but rather see you later.