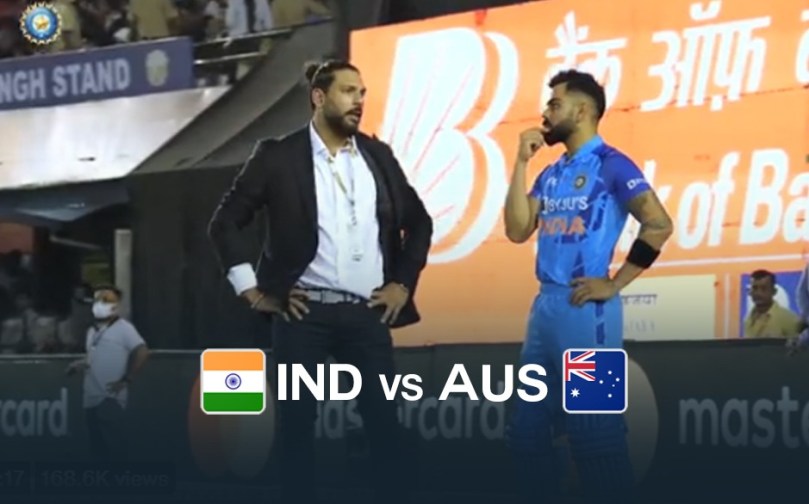 IND vs AUS LIVE – Yuvraj Singh Virat Kohli: Former India captain Virat Kohli and Yuvraj Singh caught up at the PCA IS Bindra Stadium in Mohali ahead of the start of the first T20 International against Australia on Tuesday. In the first of the three T20Is, Australia won the toss and asked India to bat first. Just before the start of the match, a padded up Virat Kohli was seed engaging in a conversation with Yuvraj Singh, who was present at his home ground. Follow IND vs AUS LIVE updates on InsideSport.IN

BCCI captured the moment and shared the video of Kohli and Yuvraj Singh’s catch-up on their social media accounts with the caption, “Pre-match catch up be like,” just before the start of the match. The clip immediately went viral on social media with the fans getting awestruck by seeing the two legends catching up with each other.

Yuvraj Singh, who was the hero of India’s 2007 T20 World Cup and 2011 World Cup victories was present at the stadium alongside his former teammate Harbhajan Singh as two stands named after the two legendary cricketers were unveiled at the stadium ahead of the game, as a mark of tribute for their contribution to Indian cricket. While the stand in the southern side of the stadium was named after Harbhajan, Yuvraj Singh’s name now adorns the stands on the northern side of the ground.

Meanwhile, Virat Kohli, who recently found his form with the bat and ended his 1020-days century drought disappointed the crowd at the stadium, who were expecting another big knock from him. He got out after scoring just two runs on the board. India however managed to post 208 on the board for the loss of six wickets with Hardik Pandya top-scoring with a scintillating 71 runs off just 30 balls. KL Rahul too slammed a fifty.