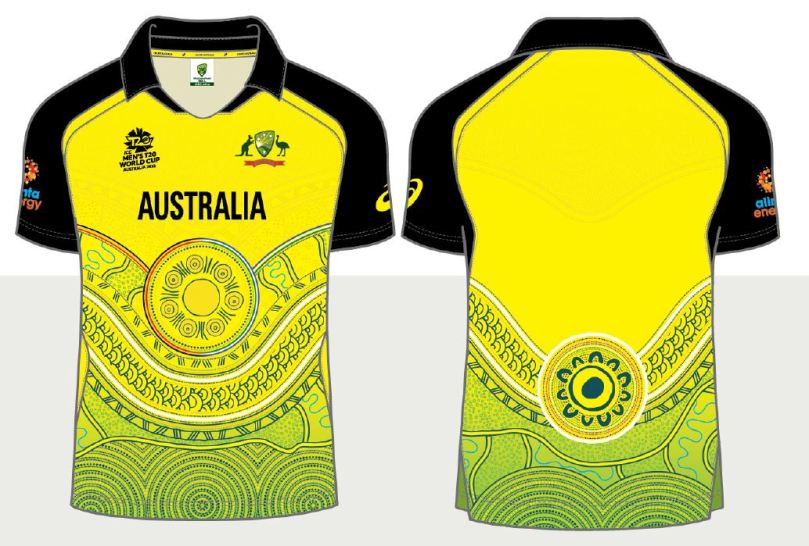 ICC T20 World CUP – Australia Cricket Team Jersey : The host of T20 World Cup, Australia has revealed their new TEAM JERSEY. Aaron Finch’s team will wear an Indigenous-themed kit at this year’s World Cup. This is the first time an Australian cricket team has worn a playing strip representing the First Nations at a global event. Hosts will wear an Indigenous inspired jersey for the first time at a World Cup event when they aim to defend their T20 crown this year: Follow ICC T20 World Cup LIVE Updates with InsideSport.IN

Australia have unveiled their @T20WorldCup 2022 jersey.

Australia Cricket Team Jersey : The NEW JERSEY will have black sleeves and a green and gold gradient on the trunk of the playing top. The artwork flows around the shirt that will be worn by Aaron Finch’s squad.

The long-sleeved version will see the gold and green artwork extended onto the sleeves of the top. The pants will be black and a cap will feature the colours of both the Aboriginal and Torres Strait Islander flags on the brim.

The kit was designed by Aunty Fiona Clarke and Courtney Hagen, in collaboration with Asics, with the pair having previously worked together on other Indigenous designs worn by Australia.

As in previous designs, the Walkabout Wickets artwork that has become a prominent motif is again central on the front of the shirt.