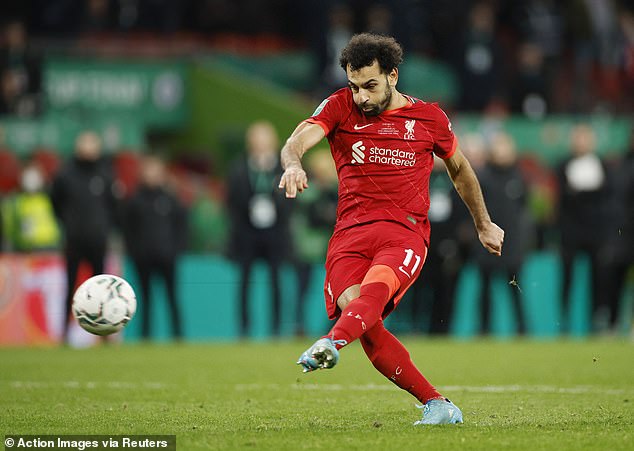 IAN LADYMAN: Kepa’s penalty miss was not a fitting way to end 120 minutes of compelling football at Wembley… Thomas Tuchel will feel this loss deeply ahead of a crucial period for Chelsea

By Ian Ladyman for MailOnline

The technical proficiency of the modern Premier League footballer is so high they no longer approach penalty shoot outs as something to be feared.

As such this was a sudden death affair that felt as though it may roll on and on in to the evening. Nobody looked remotely like missing.

Mo Salah smiled before and after taking his. Fabinho threw in in a Panenka with only Liverpool’s second while Trevoh Chalobah, a central defender, lifted Chelsea’s tenth in to the goal as though he was back with his mates on a Sunday morning in Lambeth. Pressure? If any was being felt then it was not being shown.

All of which made the sight of Chelsea’s substitute goalkeeper Kepa Arrizabalaga spooning his effort haplessly over the crossbar to hand Liverpool the trophy all the more unsettling.

After 120 minutes of compelling football and a shoot out of impeccable quality and sureness, was this a suitable and fitting way to decide it all? It is hard to say what it was.

Kepa has history at Wembley in this competition. He endeared himself to nobody when initially refusing to leave the field ahead of a shoot out in the 2019 version of this final.

Nevertheless, this was a cruel way for the Spaniard to leave such a footprint in the English game. The 27-year-old will long be remembered for this and that feels unfortunate and unfair. 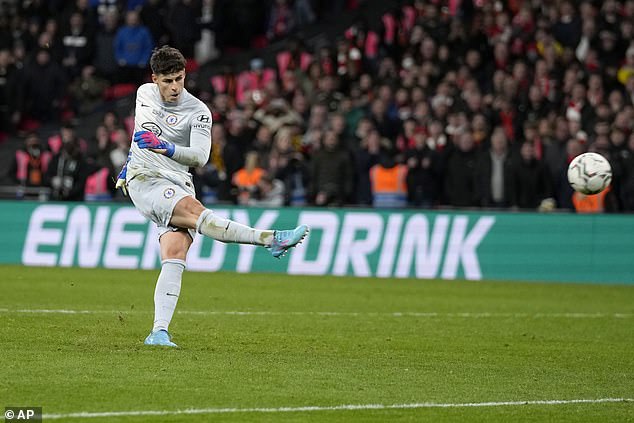 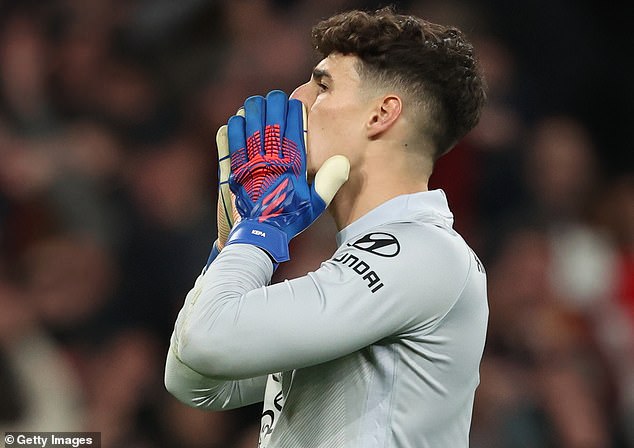 Kepa had only been brought on for the shoot out, replacing Edouard Mendy in extra-time

This was some afternoon and early evening at Wembley. Two heavyweights of the English game bashed heads relentlessly for the duration of the initial hour and a half and with only marginally less ferocity during the extra thirty minutes that followed.

Liverpool ultimately left north London with only their second domestic cup in sixteen years and it will mean all the more to them because of that.

Chelsea will harbour only regrets and not least because this was a game they could have won in regulation time had the quality of their shooting matched that shown when the penalties rolled around sometime after 7pm.

Liverpool dominated great swathes of this game in terms of possession and territory. Chelsea’s starting goalkeeper Edouard Mendy was many people’s man of the match prior to penalty saving specialist Kepa being sent on in his stead late in extra-time. 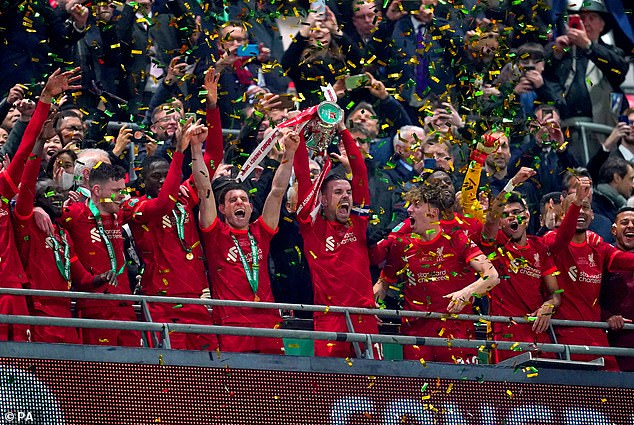 Liverpool won the Carabao Cup for a record ninth time, moving ahead of Manchester City

Nevertheless, the really big chances of the game were Chelsea’s. For all their command of the ball, Liverpool looked vulnerable to their opponents’ counters all afternoon.

Chelsea did not just miss opportunities, they missed really straight forward ones. Christian Pulisic should have beaten the excellent Caoimhin Kelleher from five yards in the sixth minute but didn’t.

Later on in the half Mason Mount missed the target from a similar range and then struck the post when clean through four minutes into the second half.

If Liverpool are to be beaten then chances like this must be taken. Had one of them been so then this may have been an afternoon with a different outcome. Liverpool more than contributed to this absorbing game and missed chances of their own. 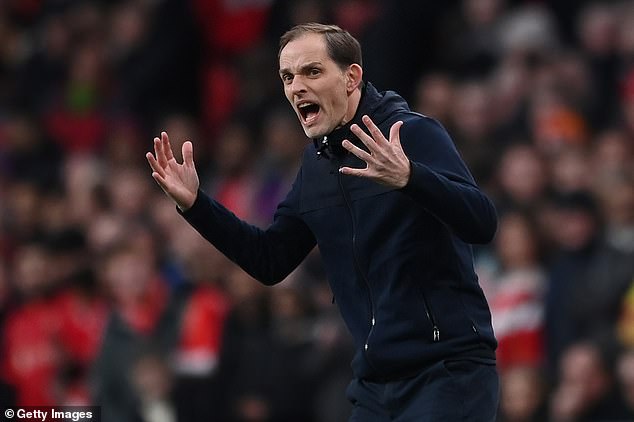 Equally this was not a match that saw Jurgen Klopp’s team at their irresistible best. There are days when Liverpool looked ready to roll over teams. This was not like that. Chelsea were superbly organised and drilled by their manager Thomas Tuchel and as such Liverpool did not always find the space in which to work.

Tuchel will feel this one deeply. After a strong start to his Chelsea tenure – he won the Champions League after less than six months in charge – his team have faltered a little as this season had progressed. A Premier League title push has not materialised. The signing of Romelu Lukaku has not worked to the extent that the Belgian began as a substitute here.

So this would have been a handy trophy to win, something to harden the perception that he is that rarest of entities – a Chelsea coach for the long term.

Tuchel is a manager of real quality, for sure. His team’s performance against an opponent expected, on form at least, to beat them was proof of that. But managers at Stamford Bridge require silverware to sustain them, no matter who is nominally running the club. 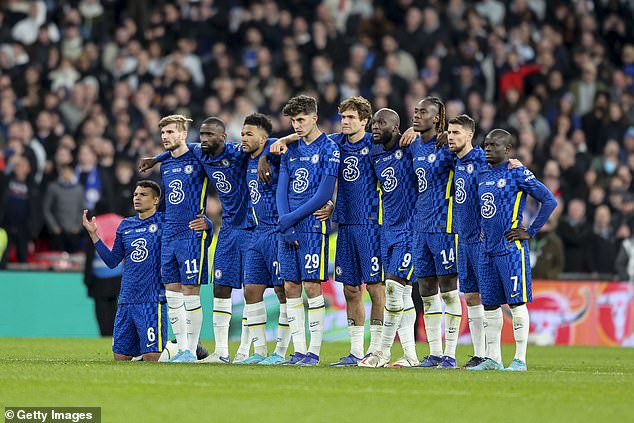 As Liverpool celebrated their victory here, Tuchel gathered his players round him and delivered what appeared to be a rallying cry ahead of what will now be a crucial period of football.

Chelsea are at Luton – ten wins from their last 13 games – in the FA Cup on Wednesday and take a Champions League first leg lead to Lille in a fortnight.

The quality of this showing should sustain them but football doesn’t always work that way. An hour after full time, internet memes of Kepa’s aberration were becoming increasingly hard to avoid. The goalkeeper will need to process this and recover quickly. And he will not be alone in that.