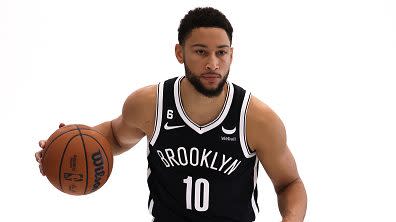 The last season he played, Ben Simmons took just 9% of his shots from beyond 10 feet — he did not space the floor at all, which meant Joel Embiid had to at times. That lack of a jumper he trusted has always been one of the knocks on Ben Simmons’ game.

“That’s why I don’t care if he ever shoots a jump shot for the Brooklyn Nets. He’s welcome to, but that is not what makes him special and not what we need. He’s a great complement to our team, and he’s an incredible basketball player because of his versatility.”

In an offense with Kevin Durant and Kyrie Irving setting the table — particularly in the halfcourt — Simmons is going to be asked to play more of a role: Be an elite defender, push the ball in transition, work in some dribble-handoff situations where he can drive the lane as an option, be a cutter off the ball, and be a distributor in the halfcourt. It’s why Simmons’ ideal role with the Nets often gets compared to Draymond Green — it’s a Draymond-lite role. There will be far less of him as lead guard running pick-and-roll.

Will Simmons settle into that role? Also, it should be noted that peak Green (2016 for example) shot better than 30% from 3 and had to be respected out there (last season 29.6% on 1.2 3s per game) — he had to be covered at the arc. Simmons does not. Also, Green did not avoid getting fouled and getting to the line.

Nash has the task of meshing Simmons into the system and figuring out the rotations — can he play Simmons and Nic Claxton together, or is having two non-jump shooters on the floor at once clog the offense? Is Simmons going to play center at points? There is championship-level talent on the Nets roster, but so many questions about fit, defense, and grit.

Here’s more on the Nets

Steve Nash on Ben Simmons: ‘I don’t care if he ever shoots a jump shot’ originally appeared on NBCSports.com