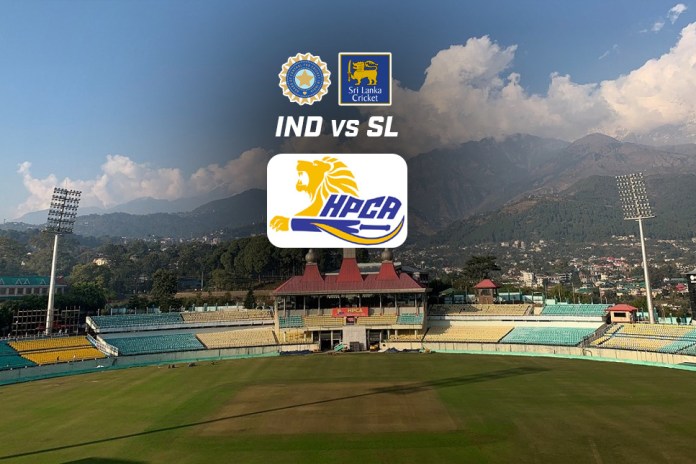 IND vs SL: HCPA appeals BCCI to allow the audience in Dharamshala – The Himachal Pradesh Cricket Association (HPCA) has formally written to the BCCI and its state government to allow the entry of 50% of spectators for the 2nd and 3rd T20I matches between India vs Sri Lanka, scheduled to take place on 26th and 27th February 2022 at Dharamshala stadium. Follow IND vs SL Live Updates on InsideSport.IN

“Since the number of corona infection cases in Himachal and the country have come down significantly, we have requested the state government and the BCCI to allow us to hold matches with 50 per cent audience capacity. In case the government allows us it would provide boost to the tourism industry in Dharamsala and the entire Kangra region” said President of HPCA Arun Kumar Dhumal to The Tribune.

The two matches will be held at the famous Dharmashala stadium set in the backdrop of the beautiful mountains. The stadium has a total seating capacity of 25000 audience seats. Matches held in this stadium often attract spectators from adjoining states like Uttar Pradesh, Punjab, Harayana and others. Both the games were scheduled to take place with spectators.

The first T20I game between India vs Sri Lanka will take place at the Atal Bihari Vajpayee Stadium in Lucknow. If the BCCI and the state government allow the entry of an audience, that could result in a potential bloom of the economy of the state in terms of tourism and hotel management.

The hotel and the tourism industry of Himachal Pradesh have taken a severe hit since the Covid pandemic hit the country. With heavy losses being incurred, the hotel associations and its President have also appealed to the state government to allow the entry of spectators in the stadium for the two matches, so that the economy in these fields could get a boost in such dark and gloomy times.

India would be eager to play this series against the island nation after having comprehensively defeated the West Indies. India won the 3-match ODI series 3-0 and now has won and leads the 3-match T20I series 2-0.

Sam Curran ruled out of T20 World Cup with back injury

Jasprit Bumrah back in Top 10 of bowlers’ After all the failings and public money, it’s time to talk about ECB bonuses | England cricket team