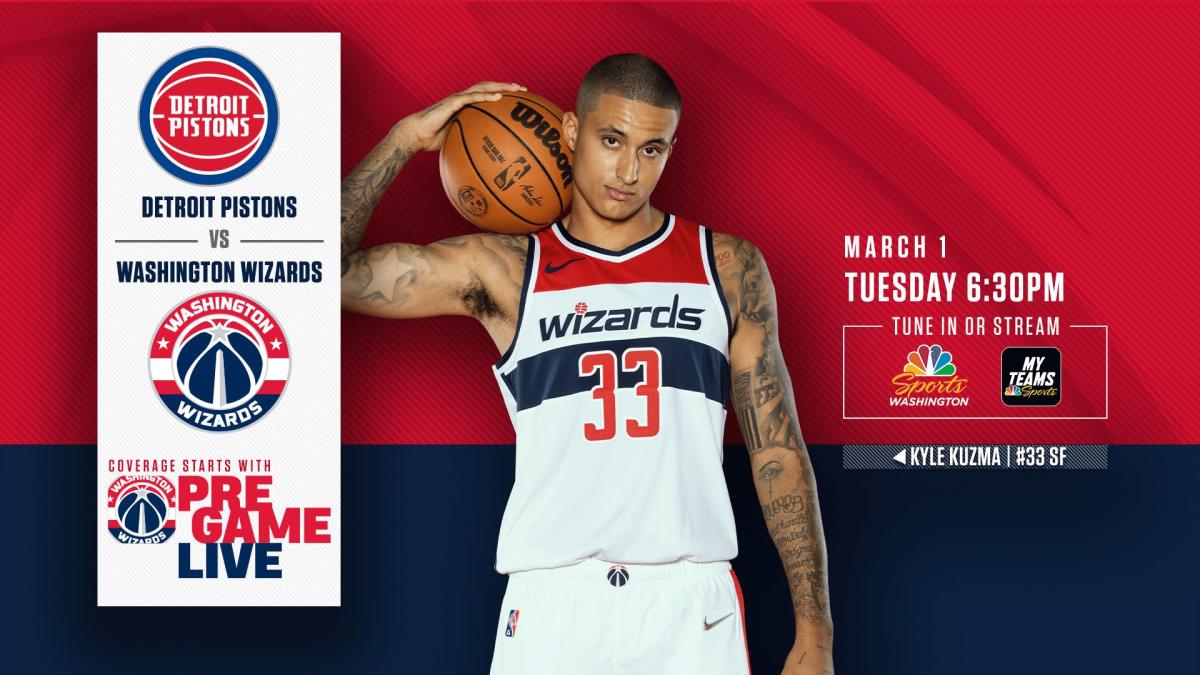 How to watch Wizards vs. Pistons originally appeared on NBC Sports Washington

The Wizards are on the heels of two pretty tough losses. First, they dropped a heartbreaker in double-overtime to the Spurs at home, 157-153. Twenty-four hours later, they held a nine-point lead in Cleveland with six minutes remaining. They couldn’t hold the lead, though, and dropped the contest by six to the Cavaliers, making it their fourth loss in six games.

Now the Wizards will look to bounce back against the Detroit Pistons for their first game of a three-game homestand. Detroit is 14th in the Eastern Conference after a devastating stretch in which they went 1-12. However, they’ve picked up the pace a little bit and are on the heels of 127-126 win over the Hornets.

Both teams are desperate for a win. Here’s everything you need to know to watch the game on NBC Sports Washington.

WIZARDS vs. PISTONS HOW TO WATCH

What: Washington Wizards vs. Detroit Pistons

Where: Capital One Arena, Washington D.C.

See also  Heat vulnerable to Nets or Raptors in first round

WIZARDS vs. PISTONS: WHAT TO WATCH

Given where they are in the standings, on the outside of the NBA’s play-in tournament picture looking in, and with star guard Bradley Beal out for the year, the Wizards have reason to treat [Kristaps Porzingis’] injury with extra caution. Those factors led to head coach Wes Unseld Jr. being asked on Monday whether the team will consider shutting Porzingis down for the rest of this season. He said that is not in the cards, at least as of now…Read more.

WIZARDS vs. PISTONS PLAYERS TO WATCH

Kyle Kuzma, SF, Wizards: Arguably the Wizards’ most surprising and best player on the season, Kuzma is currently in the midst of perhaps the best two-game stretch of his career. Though Washington lost both contest, Kuzma put up 36-8-7 and 34-13-2 statlines against the Spurs and Cavaliers, respectively. With Beal out, Kuzma has made clear he is the Wizards’ No. 1 scoring option, so pay close attention to his offense vs. Detroit.

Kelly Olynyk, PF, Pistons: Just hearing Olynyk’s name gets most Wizards fans’ blood boiling. The big man sunk a dagger against the Hornets at the buzzer to hand them the 127-126 win earlier this week. He only averages 9.5 points and 5.0 rebounds per game this year, but considering his history vs. Washington, he might just be primed to go viral again.