Just over a month ago, the Golden State Warriors hoisted the Larry O’Brien trophy as NBA champions for the fourth time in eight years.

At the center of the celebratory scrum were the three home-grown products who have helped Golden State dominate for the better part of a decade: Steph Curry, Klay Thompson, and Draymond Green.

While not physically present, there was one key piece to the Warriors’ championship run that was well-represented that night: the Warriors’ record-setting $170-million luxury tax bill.

Not only is that figure the highest-paid luxury tax bill in NBA history, it eclipses league-wide luxury tax spend in all but two seasons. Golden State has paid out a league-leading $337.8 million in penalties over the course of the luxury tax era. They’ve qualified five times — all since the 2015-2016 season.

SPORTS NEWSLETTER: Sign up now for daily updates sent to your inbox

NBA OFFSEASON: Kevin Durant and Celtics? What’s up with the Lakers?

Implemented in 2001 after the 1998 lockout, the NBA’s luxury tax is a payment system that incrementally scales the more a team exceeds the soft salary cap. It allows for exceptions, including re-signing players already on their team regardless of where their payroll is. To create an additional constraint, teams that pay the luxury tax three out of the last four seasons enter a “repeater tax” bracket.

The Warriors are expected to pay a projected $141 million in luxury tax for 2022. Combined with their $170 million bill from last year, that alone tops the lifetime tax bills of every other team in the NBA (not including 2022 projections).

In the “super-team” dominated era of the late aughts and early 2010s, Golden State zigged when most other teams zagged, choosing to assemble its core through the draft instead of through free agency and trades. Now, an in-house model has helped the Warriors become one of the league’s most popular and dominant teams. The Warriors have played in six of the last eight NBA Finals, hanging four banners and setting a historic 73-9 regular season record in the process.

“That’s the recipe for roster sustainability here is to build through the draft,” said former Brooklyn Nets assistant general manager Bobby Marks during a pre-draft press conference in June. “Develop those players, become part of your rotation.”

“Eventually,” said Marks, “there becomes a cost associated with it.”

Warriors majority owner Joe Lacob has said he would be willing to pay the tax to keep the Warriors in contention for a championship. That mindset, however, is what has Lacob in hot water with the rest of the league.

“We kind of blew a hole in the system, and it’s not a good look from the league’s perspective,” Lacob said earlier this month on The TK Show podcast. “They don’t want to see it happen. And there are limits. I’m not going to say what they are. But there are limits on what you can do.”

This exorbitant spend on home-grown talent is the first sign of a leaguewide looming issue.

The NBA has tried to help young stars stay with their drafted teams once their rookie deals expire. Rookies who hit certain performance bonuses like all-NBA honors are eligible for significantly more money with their original team. Home teams even have the added benefit of being able to offer an additional fifth year on the contract, called “Bird rights” after Hall of Famer Larry Bird.

Some teams still build in a model similar to the proverbial “super-team” model of old. The Los Angeles Clippers are projected to lead the NBA with a $144.7 million luxury tax bill in 2022, spurred by Paul George and Kawhi Leonard’s $42.5 million contracts and a handful of mid-level deals for players like Marcus Morris Sr., Robert Covington and Norman Powell. The franchise has advanced past the second round of the playoffs only once.

WARRIORS DYNASTY: How the Warriors are eyeing the Lakers as they try to create a long-running NBA dynasty

The Brooklyn Nets, with a projected $90.5 million luxury tax owed, tried building through the draft before abandoning that strategy to add Kyrie Irving and Kevin Durant. The Los Angeles Lakers, expected to pay $32.2 million, traded their youth rebuild for Anthony Davis to pair alongside LeBron James.

On paper, the rookie extensions have accomplished their goal: there are fewer young stars jumping ship after their rookie contract is over, often playing a few years on the contract at minimum before asking for a trade.

The high cost of being title contenders

This CBA initiative has led to the creation of more home-grown title contenders like the Warriors. The Eastern Conference champion Boston Celtics were led by their own drafted core of Jayson Tatum (No. 3 pick, 2017), Jaylen Brown (No. 3, 2016) and Marcus Smart (No. 6, 2014). Six of the top eight rotation players on Boston’s Finals roster were drafted by the Celtics. Boston is now projected to pay a $44.5 million tax bill in 2022, according to Spotrac.

Look at the 2021 NBA champion Milwaukee Bucks. They have not had the same draft success as the Celtics or Warriors, but landing two-time MVP Giannis Antetokounmpo comes with its own problems. Prior to 2020, Milwaukee crossed the luxury tax threshold just one time: a $4.7 million payment in the inaugural season of the luxury tax. The Bucks have paid $49.1 million in the last two seasons and are projected to shell out another $57.8 million in 2022.

It’s why Lacob went as far as to call the luxury tax format “very unfair.”

“The truth is, we’re only $40 million more than the luxury tax,” Lacob said on the “Point Forward” podcast. “Now, that’s not small but it’s not a massive number. We’re $200 million over in total because most of that is this incredible penal luxury tax. And what I consider to be unfair and I’m going to say it on this podcast and I hope it gets back to whoever is listening.

“Obviously, it’s self-serving for me to say this, but I think it’s a very unfair system because our team is built by … all top eight players are all drafted by this team.”

In an interview with NBATV before the NBA Draft, NBA commissioner Adam Silver said, “I don’t view it as penalizing them. In essence, when you have a system like we do, there’s a player sharing component to it. There’s revenue sharing and there’s also player sharing. The system is designed to help teams keep their own drafted players and they have a big advantage in doing that. In this case, Golden State was able to keep them by paying a high luxury tax in order to do that.”

Who can afford luxury taxes?

The team-building model of retaining draft talent works for those that can afford it. Boston and Golden State are both in top-ten media markets, confident in their ability to recoup their money through television deals and ticket sales..

But what happens when small markets hit it big in the draft? The Memphis Grizzlies, currently well below the luxury tax apron, watched 2019 second-overall pick Ja Morant ascend to stardom this past season.

Morant re-signed with the Grizzlies on a five-year max rookie extension earlier this month. Morant, who earned his first All-Star selection and All-NBA Second Team honors, will make $193 million over five years with the potential to reach up to $231 million.  Memphis just paid its 2018 first-round pick, Jaren Jackson Jr. a four-year, $104.7 million contract in October of 2021.

The Minnesota Timberwolves present another such case. Sitting just $4.8 million below the tax threshold, Minnesota is at a crossroads with regards to its contracts. Guard D’Angelo Russell is in the final year of his four-year, $117 million deal. He would likely have to take a significant pay cut to remain in Minnesota.

Karl-Anthony Towns agreed to a four-year, $224 million supermax extension earlier this month with the Timberwolves. This not only overlaps with the max contract being paid out to recently-acquired three-time Defensive Player of the Year Rudy Gobert, but the Timberwolves can pay young star Anthony Edwards as early as next summer.

Of course, some teams think it is worth keeping drafted talent in-house and adding other veterans, but at what point is it too much?

Even the Warriors have their limits. Golden State allowed Otto Porter Jr. To walk in free agency and were outbid on Gary Payton II. Both played vital roles in the Warriors’ most recent championship run.

At some point, even “whatever it takes” appears to have a ceiling to it.

This article originally appeared on USA TODAY: Is NBA luxury tax unfair to teams that draft well? Warriors think so

3 observations from Warriors’ victory over Mavericks in Game 3 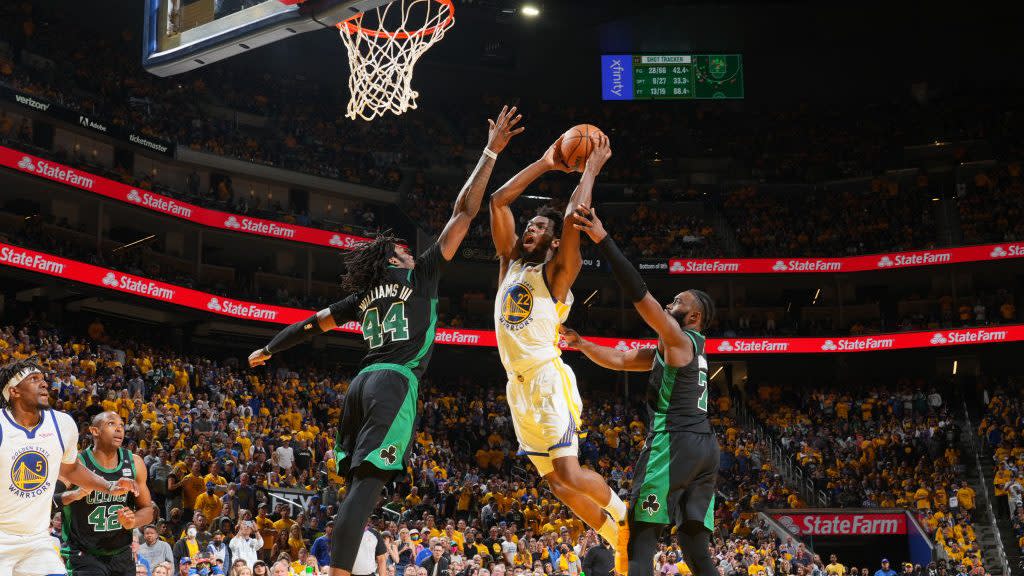