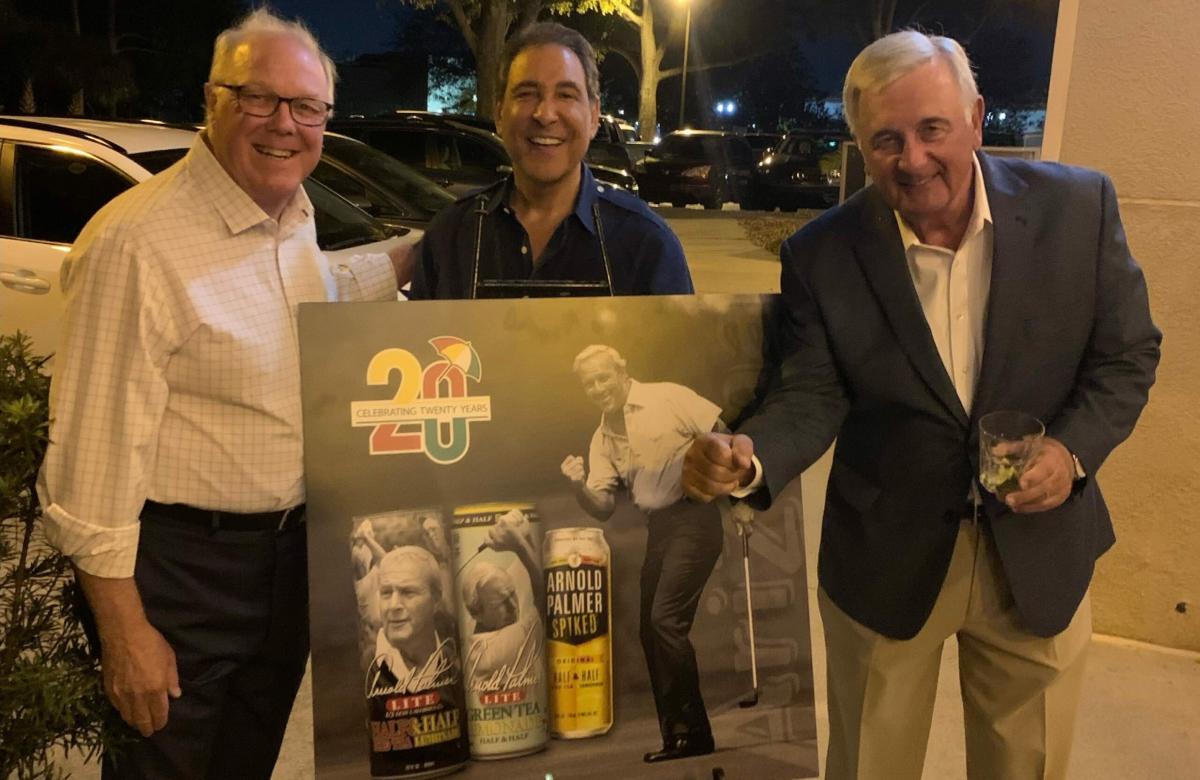 ORLANDO – Chris Byrd wouldn’t be caught dead littering, but he freely admits that any time he sees an empty can of Arnold Palmer Half & Half a smile immediately comes to his face.

“There goes another few pennies for me,” he said.

On Friday, Byrd, 72, celebrated the 20th anniversary of striking a deal with AriZona Beverage, the No. 1 selling iced tea maker, to market the Arnold Palmer brand of half iced tea, half lemonade, which became one of the fastest-growing beverages in the U.S. How big, you ask?

“We’re selling the equivalent of a million cans a day,” Byrd said.

As the story goes, Palmer conceived the idea of mixing these two refreshing drinks together one day long ago to his first wife, Winnie.

“My wife made a lot of iced tea for lunch, and I said, ‘Hey, babe, I’ve got an idea. You make the iced tea and make a big pitcher, and we’ll just put a little lemonade in it and see how that works.’ We mixed it up, and I got the solution about where I wanted it and I put the lemonade in it,” he recalled in an “ESPN 30 for 30” short.“I had it for lunch after working on the golf course. I thought, ‘Boy, this is great, babe. I’m going to take it when I play golf. I’m going to take a thermos of iced tea and lemonade.’ ”

Years later, Byrd had ordered his share of Arnold Palmers and was sipping one during a rain delay at a golf outing in St. Louis when he broached the concept of marketing the drink to the men that became his business partners – Charlie Beck and Mark Dowey – in what would become Innovative Flavors, Inc., and scratched out on the back of a paper napkin the business plan that would become Arnold Palmer Tea.

“I had this vision that it had been a brand for darn near 20 years already,” Byrd said. “Every bartender knew what an Arnold Palmer was, but he’d never made a penny off it. It was an idea whose time had come.”

Byrd had experience in the food and beverage industry, previously working as the president of a chocolate division, developing ice cream flavors and selling dairy products. In the summer, many of his dairy clients converted their fluid lines to tea and lemonade.

He made the coldest of cold calls to IMG, who managed Palmer’s business affairs and licensing deals, and was granted a meeting on the Monday after the 2001 Arnold Palmer Invitational. Byrd whipped up 10 copies of his business plan at Kinkos and brought three samples, including one from his flavor house (Allen Flavors in New Jersey).

Byrd lived down the road from Palmer’s Bay Hill Club and Lodge, but had never met the legendary golfer before. As he wrote in his self-published book, “The Original Arnold Palmer Tea Story,” Byrd had been 12 years old when he watched Palmer play in a tournament at Firestone Country Club in Akron, Ohio, in 1962. After the round, Byrd’s mom, who waited tables there, took Palmer’s order and he gave her hug. “He did that because her name was Birdie,” Byrd wrote.

It rained in Orlando on the day of Byrd’s presentation. He waited in a conference room until Palmer’s right-hand man, Alistair Johnston, joined him. Byrd walked him through the first few pages of the business plan until Johnston interrupted, got up and left and returned with Palmer.

“Young man, I understand you have something very interesting for me,” Palmer said.

Indeed, he did. Byrd poured his sample and had Palmer blind taste-test his blend of iced tea and lemonade against the current offerings already on the market from Minute Maid and Paul Newman.

“He liked ours the best, thank goodness,” Byrd recalled.

Then they got down to brass tacks and Johnston did what he normally would do when someone wanted to partner with his living legend for a client. He asked for the world, mostly in upfront money.

“I said, ‘It’s been the greatest presentation of my life. But I’m willing to walk away because I can’t put up that kind of money that you’re asking for. I’m just not going to do it. So, why don’t you just do the idea yourself,” Byrd recalled.

Then he asked if anyone had any questions. Palmer had one.

Byrd repeated that he couldn’t afford to write a big check.

Palmer was empathetic to his plight. “Can’t you get creative?” he wondered. Rather than show Byrd the door, he was a savvy enough businessman to realize that Byrd had the necessary industry connections to make this concept succeed and he was willing to cut him a deal so he could give it a try.

Thinking quickly on his feet, Byrd said to turn to the page with the royalty model for the next five years. There could be some wiggle room, and he offered to negotiate.

They shook hands and two months later the contracts were signed.

Byrd toured the country with Palmer, taking him to meet everyone from presidents of supermarkets to customers, where he’d tell a few stories and send them home with an autographed picture of The King.

While the business originally launched with the buy-in of 10 dairies, Byrd and his business partners soon realized there was greater upside. Dowey, one of three founding partners of Innovative Flavors, told Golfweek in a 2016 story that his company soon began receiving calls “from golfers’ wives saying their husbands were seeing the drink at their clubs but couldn’t find it anywhere else.”

They targeted Arizona at the recommendation of Allen Flavors, which also created many of its best-selling products. The eponymous Arnold Palmer beverage wasn’t exactly an overnight success.

“Over the first few years, I say, most companies our size would have given up on it,” said Don Vultaggio, Arizona’s chairman, in a 2013 ABC News story. “Because, you know, if the numbers don’t reach what I’ll call a ‘meaningful number’ after six months, most large companies will say, ‘Eh, it’s not worth it.’”

But Vultaggio gave the product a longer leash because he liked Palmer and believed “there was gold there, but it was deep down.”

By 2008, Arnold Palmer Iced Tea was doubling its sales, distributing bottles of almost every size, from the most popular 20-ounce 99-cent version to the 64-ounce plastic container. It was reported that sales exceeded $100 million in 2010. Byrd said it has continued to grow with retail sales of $300 million.

“We sell more than all the other branded half-and-half drinks combined,” Byrd said. “Whenever I used to see Arnold at Bay Hill, he’d stop me and ask, ‘Sell any tea today, Chris?’ He’d smile and give me a thumbs up.’ ”

Byrd sees plenty of room for future growth. In July 2017, Miller-Coors signed a deal to distribute an alcoholic version, Arnold Palmer Spiked, with 5 percent malt alcohol. In just five years, it has grown into a $50-million business.

And so the royalties keep pouring in, which was reason enough for the brain trust behind this runaway success story and their families to gather after the second round of the Arnold Palmer Invitational on Friday evening at Chatham’s Place Restaurant. Byrd ordered the veal. All that was missing, strangely enough, were cans of Arnold Palmer Iced Tea. Instead, they toasted their success with wine.

“It’s the personification of the American Dream,” said Byrd’s son, Alex, who attended the dinner. “My dad grew up in a family that could not afford golf but Arnold was a hero of my dad’s as a child, and then later in life through experience, courage and a little bit of luck my dad was able to build a successful business with Mr. Palmer.”