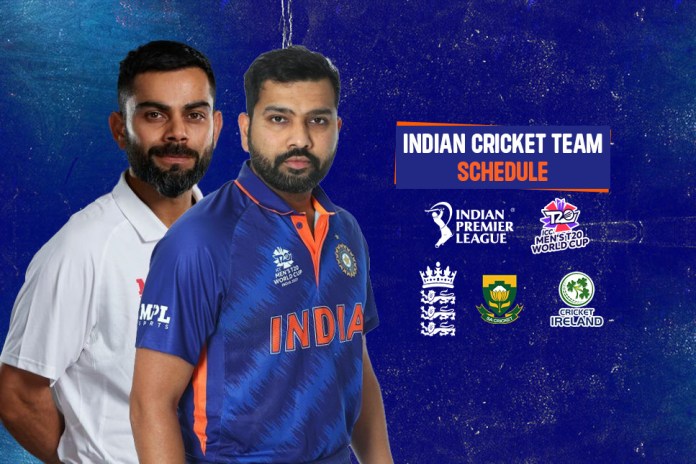 Indian Cricket Team Schedule: The Indian Cricket Team are set for a jampacked 12 months of cricketing action after the end of the home season with a clean sweep over Sri Lanka. Rohit Sharma and Co. will head to the IPL 2022 next, followed by a series of overseas tours culminating with the T20 World Cup. India have tours planned against Ireland, England, South Africa and T20 World Cup later this year. Follow Insidesport.in for all Indian cricket team updates.

Also Read: ICC 2023 World Cup: BCCI wishes to have an Indian as the LEADER of ICC during the 2023 World Cup, ready to form Local Organising Committee: Report

Rohit Sharma and Co. are all set for a gruelling schedule as they prepare for two upcoming World Cups in the next 18 months. The Indian team will now join up with their respective franchises for the IPL 2022, which kicks off in less than two weeks’ time.

The IPL will be around for the next two months before the team gets back together for a limited-overs series against South Africa at home. The series will serve as a preparatory ground for the tour of Ireland and England, with the Indian team set to play a rescheduled 5th test and limited-overs games.

Following India’s tour of England, Rohit Sharma and Co will travel to the West Indies for a limited-overs series, which will then be followed by a tour of Zimbabwe. The Men in Blue are also expected to take part in the Asia Cup set to be held in the UAE, as preparation for the T20 World Cup, which is due to start on October 16.

The Indian team will be mostly playing T20Is on these tours. It will be a time for the final round of auditions for players to stake their claim for the mega event in Australia. However, India coach Rahul Dravid has said that the team management has more or less identified the core of the team which is likely to play in the World Cup. After the last T20I against West Indies, Dravid had said that he didn’t want to spread his net too wide. But with such a busy schedule, he will have to play with a big pool of players.

The Indian team is also expected to play the Asia Cup 2022 in the UAE, before the T20 World Cup in Australia.

See also  How to Watch USA vs Ireland T20I