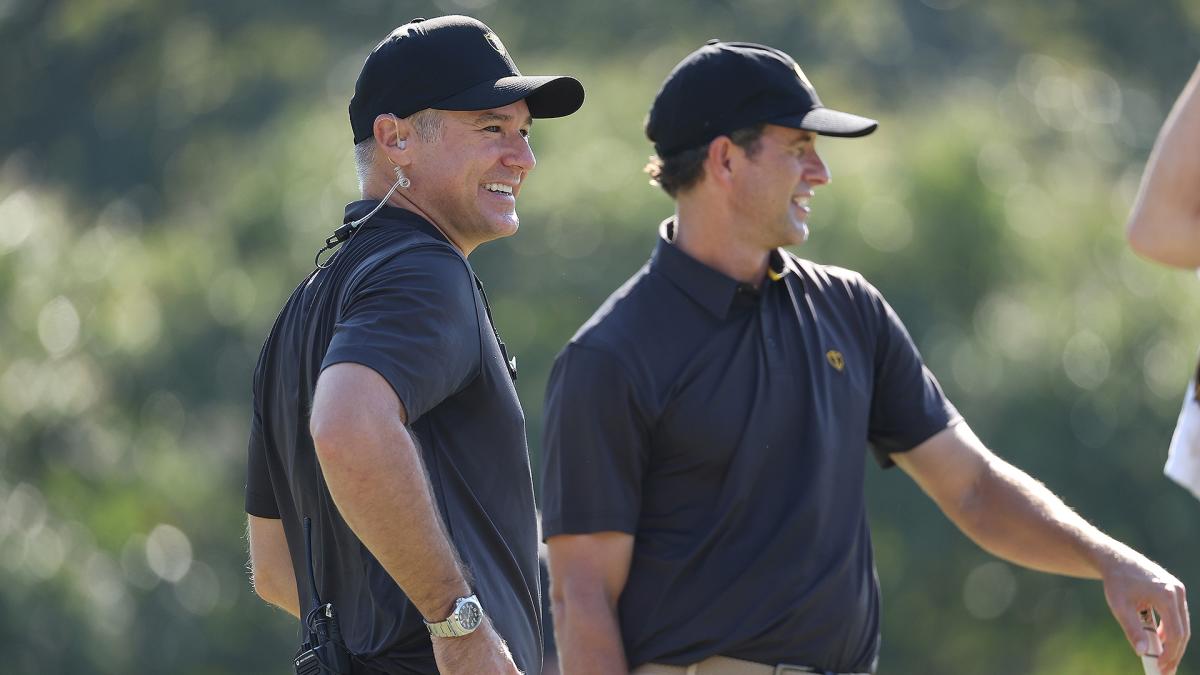 Trevor Immelman wants all of it.

Not only is this year’s International captain embracing his side’s status as a historic underdog, but he’s counting on it, leaning into it as if his team’s future depends on it.

“I let them read all the stuff that you guys are writing. That’s where I start,” Immelman told reporters Tuesday at Quail Hollow Club.

The South African is keenly aware that the Americans are 6 ½-point favorites at this Presidents Cup. His dozen also knows that in the history of the matches, on paper, there has never been a more overmatched team. The U.S. team has an average world ranking of 11.6, compared to a 48.9 average for the Internationals. Davis Love III’s team also has nine top-15 players, the most on a single team at the Presidents Cup. Immelman’s team has no top-15 players.

Monday night, when Immelman assembled his side in the team room, he reminded them of all the negativity and pointed out how many think his team has no chance.

“It’s quite clear that we’re the underdogs. We generally have been in this competition over the years, so it’s a tag that we’re used to,” he shrugged. “But the exciting part for us really is, I do think that it frees us up because we have nothing to lose. If you look at our record in this tournament and you look at our world ranking versus their world ranking, we have absolutely nothing to lose.”

The average age of Immelman’s team is 28.8, another benchmark for youth in the matches, which means most of his side weren’t in middle school the only time the Internationals won the event in 1998. His eight Presidents Cup rookies are also a record or, if Immelman’s take is valid, a reason to be optimistic.

“I’m the only one carrying any baggage on our team,” said Adam Scott, the elder statesman of the International team, making his 10th start in the matches.

For Scott and Immelman, the International team’s youth and inexperience should be celebrated. It’s why during Monday’s meeting he pointed out that it was also in North Carolina where the Wright brothers became the first to fly.

According to Las Vegas, the U.S. team is a -700 favorite. To put that in context, the U.S. team won the 2019 Presidents Cup as the -190 favorite at Royal Melbourne, 16-14. Other than the lone International victory in ’98, the Presidents Cup has gone straight chalk since the American side won the inaugural match in 1994. But the best comp for this week is likely the ’17 matches at Liberty National in New Jersey, where the U.S. team nearly closed out the Rest of World on Saturday and only needed a half-point on Sunday to secure the cup.

See also  Golf: Is Barmy Bryson DeChambeau on the brink?

Immelman has spent the last few months dissecting the anatomy of an upset as well as dealing with a combination of unprecedented setbacks, including a global pandemic and a rival league that’s gutted his team. Instead of the likes of Cameron Smith, Joaquin Niemann, Marc Leishman, Carlos Ortiz, Abraham Ancer and Branden Grace rounding out his team room as automatic qualifiers or captain’s picks, LIV Golf forced him to pivot to youth and inexperience.

It’s a reality he’s come to terms with and, given the fractured nature of professional golf at the moment, entirely unavoidable.

“I think it’s worked out quite well that we’ve got eight rookies here because they are just so excited,” he said. “Everything is new and fresh, and they’re seeing everything for the first time. It’s kind of like Christmas morning when you can’t wait to open your presents up.”

The betting line is somewhat misleading considering the lopsided history of the event and the team Immelman assembled. At -700, that would be akin to a 16 ½-point favorite in a football game, but it feels more like the 2007 college game when Appalachian State stunned Michigan, a 33-point favorite, at “The Big House.”

“Someone is going to make a lot of money,” Scott laughed when told his team’s betting line.

If Immelman was looking to lean into the odds, which he definitely is, he could also point to the 2008 Masters, which he won as a 150-1 longshot. It’s all rat poison and he can’t get enough of it, because he wants his players, with every bit of that inexperience, to understand that the only path to victory runs through all of that noise.

He’ll give more speeches this week given how thoroughly he’s embraced the role of captain, but they will all be variations on a single theme: “Have a blast and let ‘er rip. We have absolutely nothing to lose.”