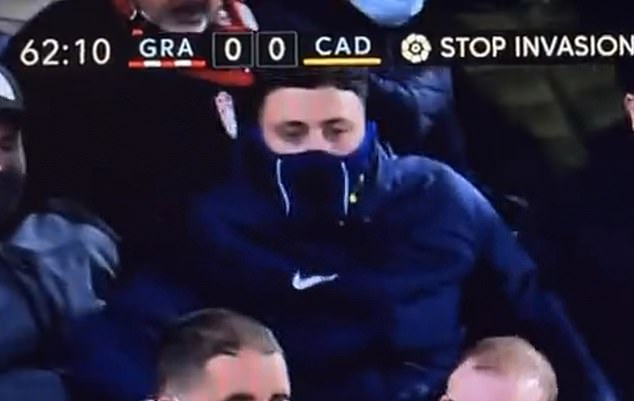 ‘He called me a monkey’: Cadiz star Carlos Akapo confronts Granada fan caught appearing to make racist gestures at him during LaLiga clash with Granada on Monday night

Carlos Akapo confronted a fan who appeared to make a racist gesture towards him during Cadiz’s LaLiga fixture with Granada at Los Carmenes on Monday evening.

Akapo was replaced by Ivan Alejo in the 62nd minute of the game and walked around the side of the pitch to return to the dugout.

During his journey back to the bench, Akapo was harassed by a home fan – who was caught on camera making a monkey gesture.

TV cameras zoomed in on the guilty party – who is wanted by the LaLiga side, Granada 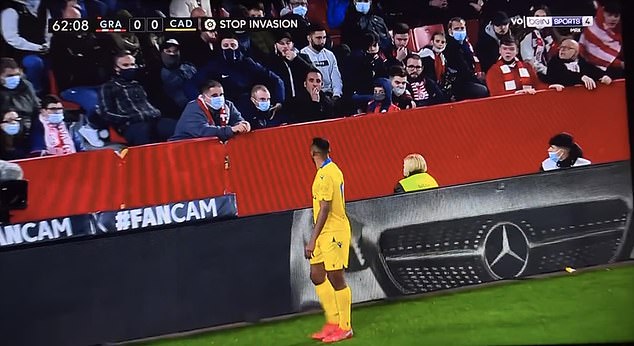 The 28-year-old defender stopped to confront the fan – who was sitting two rows back in the stands.

Instead of showing remorse for his actions, the supporter responded by making the gesture towards Akapo again.

As a result, Granada fans sitting in the front row turned around to tell the guilty party to stop and show their support for Akapo.

Fans and pundits took to social media to express their disappointment following the incident on Monday night.

Journalist Sid Lowe wrote: ‘Carlos Akapo walking off around pitch. Sadly, it looks very, very much like a fan did a monkey gesture at him as he passed. 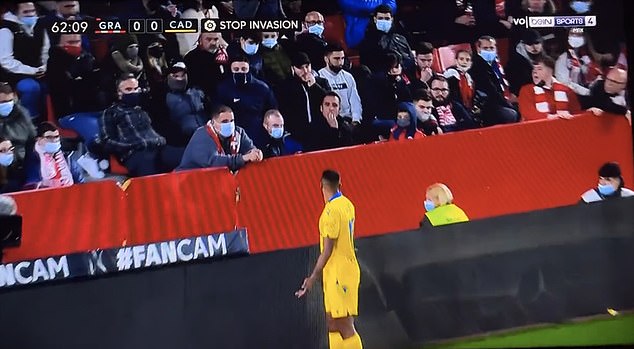 ‘Akapo stopped then walked away. The good (‘good’) news is the fan in front of him had a word and the TV cameras have absolutely identified him. Clear shot.’

Troy Townsend, Head of Development at Kick It Out, added: ‘Disgraceful. I hope there is a consequence for that supporter’s actions.’

While one of Akapo’s team-mates, Alfonso Espino, tweeted after the match: ‘@carlosakapo I hug you from a distance.’

Akapo also spoke to GOLTV and El Larguero about the incident that took place. According to AS, he said: ‘There have been three or four a*******. I know it’s wrong, but they don’t represent the Granada fans at all. 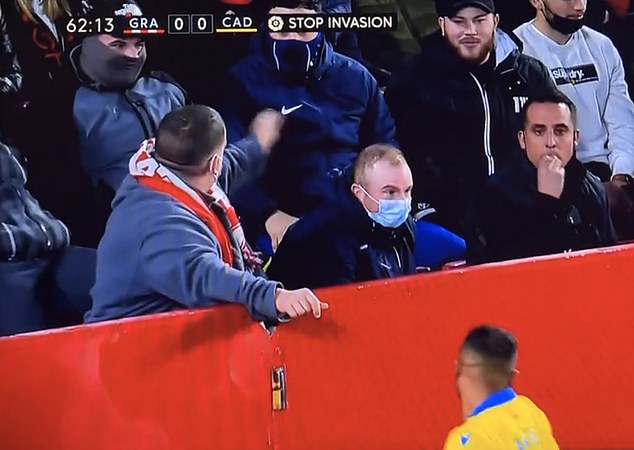 ‘But above all there has been one who has insisted and has called me a monkey. On the one hand it affects me and on the other we have to give visibility so that people are not in the fields.

‘They are people who do not deserve to come to the stadium and who do not represent to the fans of Granada. It doesn’t enter my head that people insult and call you black.

‘For my part, I treat him calmly, and I try to make people see what idiocy and nonsense they do. I hope they take him away from football.

‘Many thanks also to the Granada fans who told him to stop. I will try to forget it. Football is values of respect.’