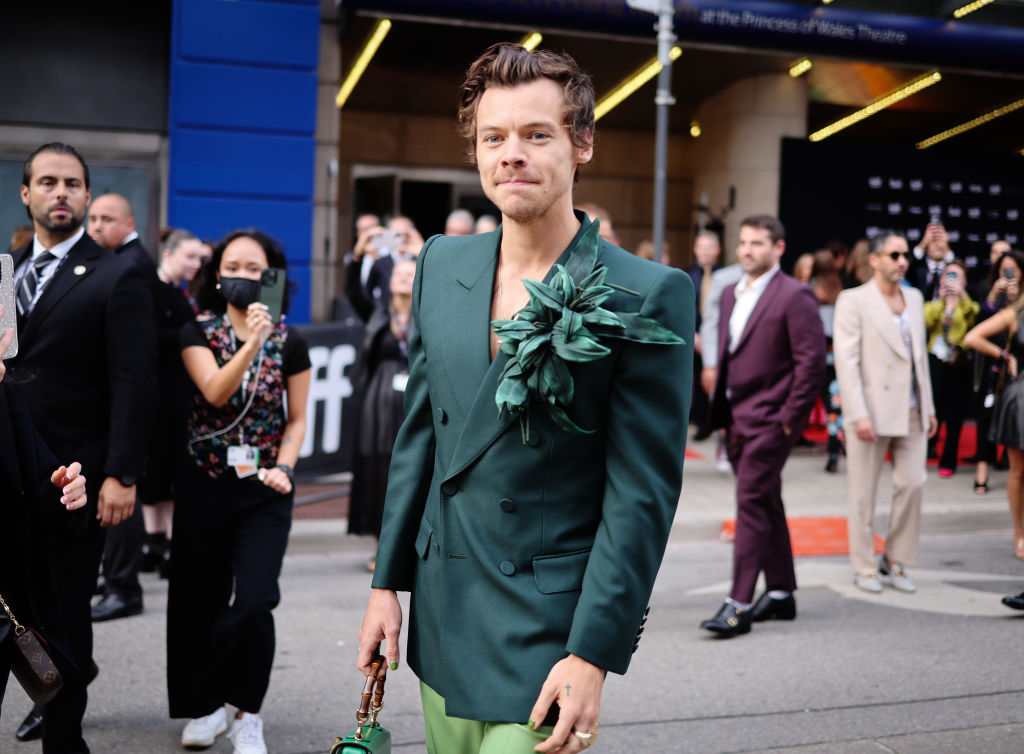 Harry Styles stepped out in groovy style at the 2022 Toronto International Film Festival on Sunday while attending the premiere of his new movie project, “My Policeman.” The film, directed by Michael Grandage and starring Styles, David Dawson and Emma Corin, will arrive in the theaters on Oct. 21.

For the red carpet, Styles continued his ‘70s fashion journey and his partnership with Gucci. The singer and actor wore a dark green jacket from Gucci’s spring 2022 runway with a flower brooch attached. Styles paired it with light green trousers and a green Gucci bag with a bamboo handle.

For footwear, the star of “Don’t Worry Darling” chose a cream pair of heeled boots, elevating his retro style.

Styles and the cast of “My Policeman” received the Ensemble Performance Award at the festival’s Tribute Awards on Sunday night. This is Styles’ first award of the season.

This is a busy year for Styles’ acting career. Earlier this month, the British star attended the 2022 Venice International Film Festival to promote another project, the film “Don’t Worry Darling” directed by Olivia Wilde. For the occasion, Styles wore a head-to-toe Gucci outfit, this time in shades of blue. He walked the red carpet in a deep navy Gucci suit, which included a double-breasted silhouette and pleated trousers. When it came to shoes, Styles slipped on white leather uppers with almond-shaped toes.

The 2022 Toronto International Film Festival (TIFF) celebrates the art of Canadian cinema. Held from September 8-18, this year’s Festival features a diverse lineup of films, including “The Woman King,” “Weird: The Al Yankovic Story,” “The Fabelmans,” “My Policeman,” “Bros” and “Butcher’s Crossing.” The occasion also includes the TIFF Industry Conference, which features panels with different industry members and celebrities on the business and art of filmmaking.