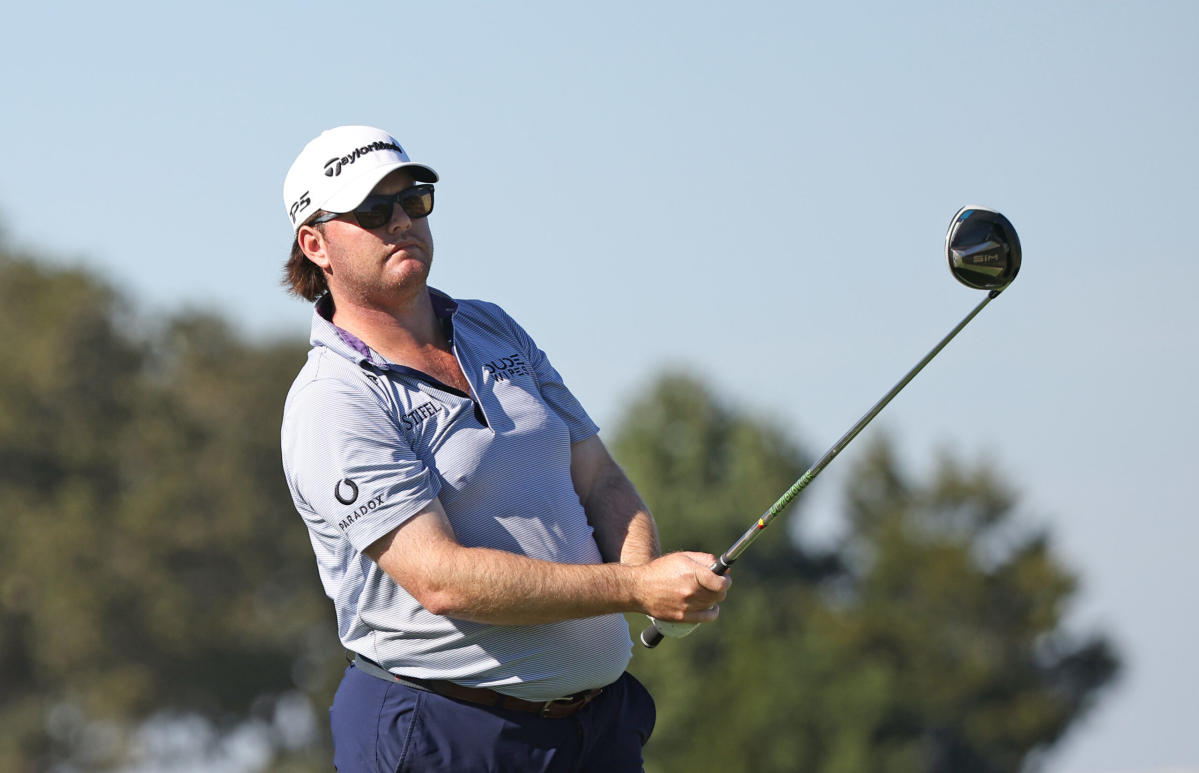 ST. SIMONS ISLAND, Ga. — After shooting 7-under 63 on Friday, Harry Higgs was asked whether he has been putting pretty well of late. He smiled and corrected the writer. “No, I’ve been putting really good,” Higgs said.

Indeed, he has. Higgs gained more than three strokes to the field on the greens at Sea Island Resort’s Seaside Course on Friday, the second best performance in the field and it propelled him into a share of the 36-hole lead with Cole Hammer and Andrew Putnam at 12-under 130 in the RSM Classic.

“It’s usually pretty good,” Higgs said of his putting. “I feel like I have very good touch, and I feel like I read the greens really well, so that should be pretty easy. The only poor putt I hit today was kind of the first one that I had that was slow and I just kind of laughed.”

His ballstriking has been equally as impressive. Higgs has hit 33 of 36 greens in regulation through two rounds.

“The way that I’m putting, I just have to get it somewhere on the green and it’s probably going to come close to going in the hole,” he said.

Higgs struggled last season and is playing out of the Nos. 126-150 category this season. His confidence lagged and it took a hard look in the mirror to realize he’s been his own worst enemy.

“It’s miserable, it sucks, but it’s part of what we have to do,” he said of battling to keep playing privileges each season. “You have to deal with it. It’s OK to be fearful, it’s OK to feel the pressure. It’s just kind of how you react to it, right? Whether you kind of want to run and hide in the corner. Like I wouldn’t say I necessarily ran and hid in the corner, but I was very down on myself.”

Higgs spoke recently about how instead of spiraling down, he’s trying to spiral up and not be so hard on himself. His attitude on the course has improved, and he’s shown some signs of finding life in his game. His Friday 63 marked his fourth bogey-free round of 65 or less already this season.

“I’m going to at some point get out of this rut, which I felt like I was really close to doing in Bermuda and then played a poor day Friday. You know, a couple weeks ago in Mexico it felt like I was at least – the tires were spinning the other way, I was going to get out of it,” he said. “Come here and sure, I could do a lot of things better than I did this week so far, but I think I’m tied for first place, so you can take it easy, man. Like it’s OK to hit a few poor shots and smile a little bit and joke.”

See also  Phil Mickelson admits, it's not about the SGL; it's about Tour 'leverage'

Putnam poised to attack on weekend

Andrew Putnam plays his third shot on the eighth green during the second round of the 2022 RSM Classic at Sea Island Resort Plantation Course in St Simons Island, Georgia. (Photo: Cliff Hawkins/Getty Images)

A pair of 65s through 36 holes has Andrew Putnam tied for the lead at the RSM Classic, and he had little to complain about.

“Man, I did everything well. Honestly, I didn’t really miss too many shots,” he said. “Hit a lot of close iron shots and just played really great golf.”

Putnam is making his eighth start of the 2022-23 Tour season and is a perfect 8-for-8 in making the weekend. Improved driving accuracy, his usual solid putting and above average iron play has him rolling. He finished T-2 behind Keegan Bradley at the Zozo Championship in Japan. What does he need to do differently to get back in the winner’s circle for the first time since 2018?

“Seeing how Keegan won, I feel like he had to stay aggressive and attack, and that’s the key to winning out here,” he said.

Cole Hammer reacts to his putt on the 18th green during the second round of the 2022 RSM Classic at Sea Island Resort Seaside Course in St Simons Island, Georgia. (Photo: Cliff Hawkins/Getty Images)

It wasn’t as pretty as Thursday’s 64 at Plantation, but Cole Hammer followed up with a 4-under 66 at Seaside Course on Friday to share the 36-hole lead of the RSM Classic with Putnam and Higgs.

Hammer made seven birdies in the second round but sprinkled in three bogeys, including two in a row at Nos. 7 and 8.

“I was a little bit depressed after 7 and 8, for sure. I put myself in great position to make birdies and I walked out with two bogeys, and that’s almost inexcusable, especially when there are birdies to be made out there,” he said. “But coming back firing on 9 and then making a birdie on 10 kind of erasing those bogeys on two of the tougher holes right away was huge for momentum and for confidence. Then I rolled one in on 12 and then just kind of played steady golf in from there. Yeah, it was obviously very much a rollercoaster round, but sometimes that’s the way it is.”

Hammer spoke about the importance of being patient on Thursday and that was the key on Friday too.

“I didn’t freak out or anything going into the back nine, and thank goodness I didn’t because it gave me an opportunity to play some golf,” he said.

Hammer, who is a non-member with conditional status on the Korn Ferry Tour, received a sponsor’s exemption into the tournament on Sunday, and he’s making the most of it through the halfway point.

“I’m not really supposed to be here,” he said. “I was five over par through 20 holes in the Houston Open and came back and made the cut and then kind of got a call that night that I was in this week and my fall just kind of kept getting extended.”

Joel Dahmen reacts on the second green during the second round of the 2022 RSM Classic at Sea Island Resort Plantation Course in St Simons Island, Georgia. (Photo: Cliff Hawkins/Getty Images)

When Joel Dahmen won the 2021 Corales Puntacana Resort & Club Championship, it locked up a job on the PGA Tour for the next two years. But that job security is about to run out, and he’s none too happy about it.

If Dahmen keeps playing like he has of late, he won’t have to worry too much about it. He finished T-3 at the World Wide Technologies Championship at Mayakoba, his best result since his victory. On Friday, Dahmen, 35, shot a bogey-free 8-under 64 at Sea Island Resort’s Plantation Course to improve to 11-under 131 and one stroke off the lead at the RSM Classic.

“I’ve always kind of played better when my back’s against the wall a little bit, and it’s hard to say your back’s against the wall when you’re starting out a year, but for the first time in a couple years it was different for me,” he said. “It can go sour quickly. To play with freedom for a year and a half, two and a half years really, never had that in my career. So yeah, like teeing up in Napa (at the season-opening Fortinet Championship) was like OK, we’re back at square one. If you don’t play well, you don’t have a job. I was very aware of that, for sure.”

Dahmen said he’s worked at a golf course and did a six-month stint as a valet in college, and wouldn’t know where to start in making a resume. Not that he ever wants to.

“Any job where I am not the boss, where I don’t get – I go to work whenever I want. Yeah, any job is scary,” he said.

No problems for Noh through 36 holes

Seung-Yul Noh walks on the third green during the second round of the 2022 RSM Classic at Sea Island Resort Plantation Course in St Simons Island, Georgia. (Photo: Cliff Hawkins/Getty Images)

After Seung-Yul Noh finished T-64 at the Cadence Bank Houston Open, he flew home on Sunday. He was the fifth alternate to get into the RSM Classic on Monday and figured his fall was over.

“So I’m just like relaxing Monday and Tuesday, no golf, no practice. And then afternoon on Tuesday I finally got in the field and then just came here really late Tuesday night, no practice round,” he said.

It hasn’t bothered him through 36 holes. Noh, 31, followed up a 2-under 68 at Sea Island Resort’s Seaside Course with a bogey-free 8-under 64 at the Plantation Course on Friday.

Noh last won at the 2014 Zurich Classic of New Orleans when it was an individual competition. In 2017, he spent two years serving his mandatory military obligation in South Korea and his game hasn’t really been the same since – he hasn’t recorded a top-10 finish in his last 40 starts. During those two years, he said he played no more than 40 times and wasn’t able to practice.

“When I came out on Tour, I feel like an amateur because like I lose confidence, like lose whole routines, losing everything,” he said. “I’m not going to say like waste of time (being in) military. Like I had a good experience…except (for) the golf career.”

But Noh has Monday qualified into the Fortinet Championship and Houston, where he shot 62 to earn one of the four spots into the field. On Friday, he reeled off five birdies in a row beginning at the fourth hole.