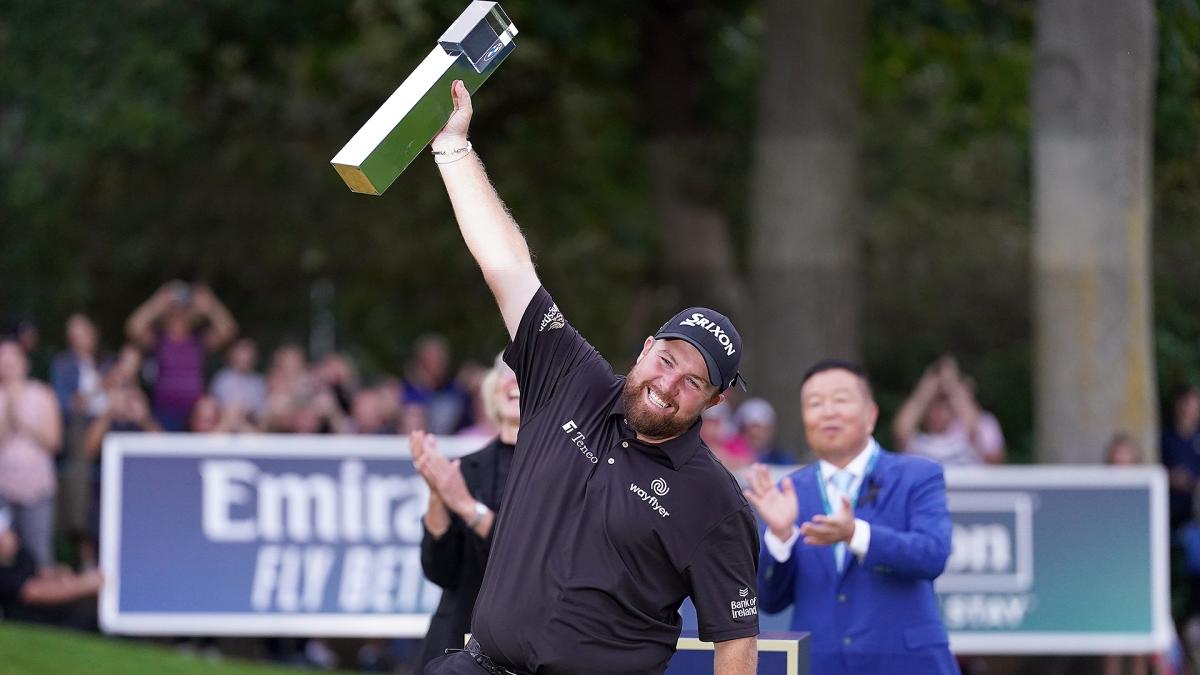 Shane Lowry wins one for the “good guys,” the LIV rebels engage in self-sabotage, the Presidents Cup teams take shape and more in this week’s edition of Monday Scramble:

Shane Lowry’s sneaky-good year is now a great one.

The Irishman, who missed a couple of chances to win on the PGA Tour last season, cashed in at the DP World Tour’s biggest event by closing with 65 and holding off Jon Rahm and Rory McIlroy by a shot. It was another dramatic ending at Wentworth: McIlroy burned the edge on the 17th hole and then needed an eagle at the final green, but he left the 25-foot putt just outside the right lip. Rahm closed with 62, including a back-nine 29 (with a bogey).

“I’m really happy for him,” McIlroy said of Lowry, whom he nipped for the BMW PGA title in 2014. “He’s played a lot of good golf and he deserves this one.”

Lowry narrowly missed qualifying for the Tour Championship (No. 32) after a season in which he couldn’t convert good chances to win at the Honda and Heritage, the former after getting caught in a downpour on the final holes. This was the best and most consistent golf of his life, and he had little to show for it.

Before the final round, Lowry told coach Neil Manchip that he was tired of being passive in the moment and wanted to “grab the bull by the horns and go win the tournament.” At rain-softened Wentworth, he played all 54 holes without a bogey, struck arguably the best 5-iron of his life into the home hole and shot 17-under 199 to capture one of the tournament titles he most wanted.

Remarkably, it marked his first tournament victory anywhere since the 2019 Open.

The BMW PGA Championship was billed as the ultimate showdown between the top players primed for a European tour celebration and the LIV 18 that showed up unwelcome to the party.

DP World Tour chief executive Keith Pelley made it clear from the onset that he didn’t approve of those rebels teeing it up in his flagship event, but there wasn’t much he could do about it – a court case in February 2023 will determine whether the tour has the authority to suspend those players, as the PGA Tour has. In the meantime, he has to hold his nose and hope the stench doesn’t overwhelm his events.

See also  Stay away from the 150th Open Championship at St. Andrews

Though a tournament round was canceled because of Queen Elizabeth II’s death, the BMW PGA still delivered. Wentworth’s closing stretch predictably produced fireworks. And the final leaderboard, even with 54 holes, was Pelley’s dream:

At the beginning of the week, in a passionate interview, Lowry told Sky Sports that he “can’t stand” the thought of LIV players teeing it up alongside those who have remained loyal and true to the established tours. By week’s end, he was at the top, with LIVers Talor Gooch alone in fourth place and Patrick Reed sharing fifth.

That undercurrent of emotion is unlikely to recede, and it’s showed up at the very top of the player pecking order with McIlroy, who admitted that he doesn’t have much of a relationship anymore with his former Ryder Cup teammates.

That’s been one of the most bewildering aspect of this entire melodrama.

Lee Westwood, Ian Poulter and Sergio Garcia desperately want to remain involved with the European Ryder Cup team moving forward, either as captains or players, and yet they’ve been the most disruptive and antagonistic. Westwood has been openly critical of the European tour brass and publicly trolled other players. Poulter defied Pelley’s request to refrain from wearing LIV-branded clothes and continues to fight the tours in court. And Garcia has been his typically petulant self, ranting in an infamous locker-room tirade, whining in meetings, then withdrawing after a poor opening round at Wentworth (with no reason given) and returning home to Austin in time for catch the Longhorns’ football game.

The latter happens all the time, of course, but it was an especially bad look considering A) the LIV players fought the tour just to play in the event, and B) with his heart clearly not in it, Garcia had robbed another player of a spot in the field. In this case, it was fellow Spaniard Alfredo Garcia-Heredia, the first alternate who at No. 134 in points was vying to keep his card. He’s also (drumroll, please) Rahm’s good friend, a player who Rahm went out of his way to point out before the tournament as someone getting squeezed by the LIV entrants. That’ll sting even more.

See also  Players feel the pressure - and a sense of victory

So, to recap: Not only have these decorated veterans infuriated the European tour leadership, but they have also drawn the ire of the best players – the very players whose help they’d need if they ever want to be reintegrated into a team room, since they’ll never be able to qualify for a team on their own.

Some of the rebels’ arguments even have merit. But they’re going about it the wrong way, torpedoing friendships and burning connections in a sad journey to exile.

Now that the Presidents Cup teams are set, the only question remaining: Do the Internationals have any shot?

The visitors have won just once in 13 tries. They’re heading into enemy territory at Quail Hollow, a spacious ballpark that’ll be teeming with Americans fans. And they’re down not just Cameron Smith and Joaquin Niemann, but also fellow LIV defectors Louis Oosthuizen, Abe Ancer, Carlos Ortiz and Marc Leishman – all of whom were likely to make the team, either as an automatic selection or wildcard pick.

Yes, anything can happen in 18-hole match play. And of course, these are still 12 of the best golfers in the world (though we would have liked to see Ryan Fox on the roster), captained by a man, former Masters champion Trevor Immelman, who knows what it’s like to pull off the unlikely. But this is still one of the best American rosters ever assembled, and it’s hard to imagine that complacency will be an issue; these guys are coldblooded killers who are wired to ensure that last fall’s historic Ryder Cup romp was just a preview. Keep in mind the last time the Americans hosted a Presidents Cup, in 2017, the thing was nearly over on Saturday night. That could very well be the goal this time around.

An International victory next week would be one of the greatest upsets in the history of the sport.

No Doubt About It: Scottie Scheffler. What was obvious became confirmed over the weekend, with Scheffler being named the Tour Player of the Year for the 2021-22 season in an announcement that was made during “College GameDay” live from Austin, a really cool touch. Scheffler became the first player to be named Korn Ferry Tour Player of the Year, Tour Rookie of the Year and now the Tour’s top player – and he did it within a four-year span. The fact that Scheffler received “only” 89% of the vote suggests that the membership still (over)values the FedExCup winner.

Welcome Back!: PGA Tour golf. Less than three weeks after the 2021-22 season ended, it’s time to kick off the 2022-23 campaign, the final wraparound season (thankfully) before the circuit returns to a January-August schedule in 2024. Among those teeing it up this week in Napa: Hideki Matsuyama, Max Homa, Rickie Fowler and Sahith Theegala, along with promising newcomers like Austin Eckroat, Justin Suh, Kevin Yu and Matti Schmid.

His Plan … Worked?: Talor Gooch. Somewhat controversially, Gooch admitted to chasing world-ranking points when he teed it up – for the first time – at the DP World Tour’s flagship event. His goal was clear and obvious: He had slipped to 46th in the world, and he wanted to remain inside the top 50 in the world by the end of the year so that he could remain exempt (for now) into the 2023 Masters. His solo-fourth finish allowed him to move up 11 spots, to No. 35, and it’ll be interesting to see now whether that’s enough or if needs to add another tournament to maintain that position. Gooch has played well all year, actually, with the high finish here in addition to top-10s in all four of his LIV starts.

Sneak Peek: Italian Open. All eyes this week will be on Marco Simone, which is staging this week’s DP World Tour event before serving as host for the 2023 Ryder Cup. McIlroy and U.S. Open champion Matt Fitzpatrick are among those who will also be getting an early look. The LIVers, meanwhile, will be in Chicago for the fifth tour event.

Anotha One: Ally Ewing. With a strong closing stretch in Cincy, Ewing became just the second LPGA player (Jin Young Ko) to win an event in each of the past three seasons. Ewing ripped off five birdies in a row on the back nine for a Sunday 66, giving her a one-shot victory over Xiyu Lin.

Freak Athlete (No, Seriously!): John Daly. His work ethic leaves much to be desired, of course, but there’s no overstating that this dude is an athletic marvel with insane physical gifts. Peep this smooth action that puts other recent attempts to shame: