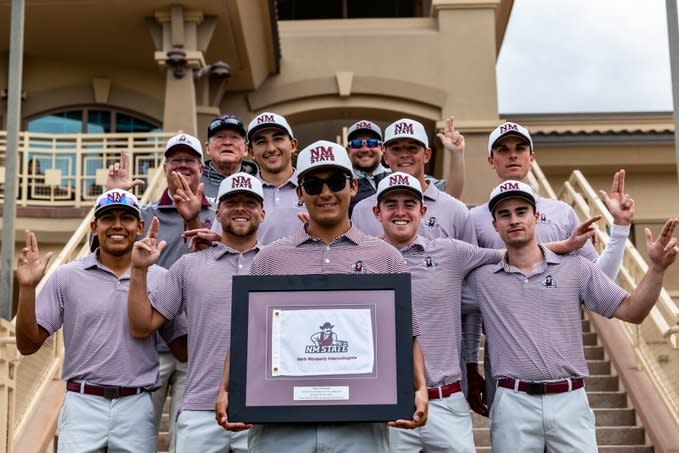 It’s safe to say it was a good week for Garrison Smith and the New Mexico State men’s golf team.

The Aggies won the Herb Wimberly Intercollegiate for the third straight season, cruising to a 20-shot victory over second-place Seattle University and Weber State.

Smith, a senior, ran away with the individual title, shooting a 15-under 198 at University Golf Course in Las Crusas, New Mexico. The 198 total is the lowest 54-hole score in New Mexico State history. This season, Smith has yet to finish worse than third place. He has recorded two third-place finishes to go along with his victory. He had only two bogeys en route to his win.

New Mexico State was the only team to shoot below par, finishing at 20 under. California Baptist came in fourth, one shot behind Seattle University and Weber State, and Western New Mexico placed fifth at 12 over.

In the individual competition, Texas A&M Commerce’s Nathan McCulloch placed second at 8 under. Texas Tech’s Gustav Andersson placed third at 4 under, along with New Mexico State’s Aiden Thomas. Weber State’s Cameron Gray rounded out the top five, finishing at 3 under.

Ludvig Abert and Calum Scott have been terrific for Texas Tech this fall. That’s why it’s no surprise when the Red Raiders needed their duo to step up in the Big 12 match play final against Oklahoma, they did just that.

Aberg and Scott secured the final 1.5 points, as Texas Tech topped the Sooners 3.5-2.5 in the championship match at The Club at Houston Oaks in Houston to win for the second time this fall. Aberg birdied the 18th hole to put the Red Raiders up 3-2, and Scott followed that up with a big par putt to halve the 18th and earn the half point, securing the victory for Texas Tech.

Jack Wall had a 4 and 3 victory to get a point for the Red Raiders earlier in the match. Texas Tech beat defending national champion Texas earlier in the day to advance to the championship match, while the Sooners defeated in-state rival Oklahoma State. The Cowboys fell against Texas in the third-place match.

Speaking of the Sooners, their practice facilities are about to receive a big facelift.

Oklahoma announced a $5 million gift from longtime golf supporter Jerry Ransom that will support the modernization of the existing Charlie Coe Center and the creation of a new indoor golf performance center.

The upcoming facility improvements to the Charlie Coe Center will result in a renovated clubhouse that includes suites for both men’s and women’s programs and a multi-purpose area that will showcase each program’s history. Each suite will feature a locker room, a players lounge, coaches offices and a rest-and-recovery space.

In addition to these improvements, the gift will create a indoor performance center. The center will include six hitting bays equipped with world-class swing analysis technology, a putting studio, putting lab, a golf simulator and conference rooms for team instruction.

Win a college event, get an exemption into a Korn Ferry Tour event.

The individual champion of next week’s The Clerico at The Oaks Country Club in Tulsa, Oklahoma, will also earn an exemption into one of the newest Korn Ferry Tour’s events, the Compliance Solutions Championship at Jimmie Austin Golf Club in Norman, Oklahoma.