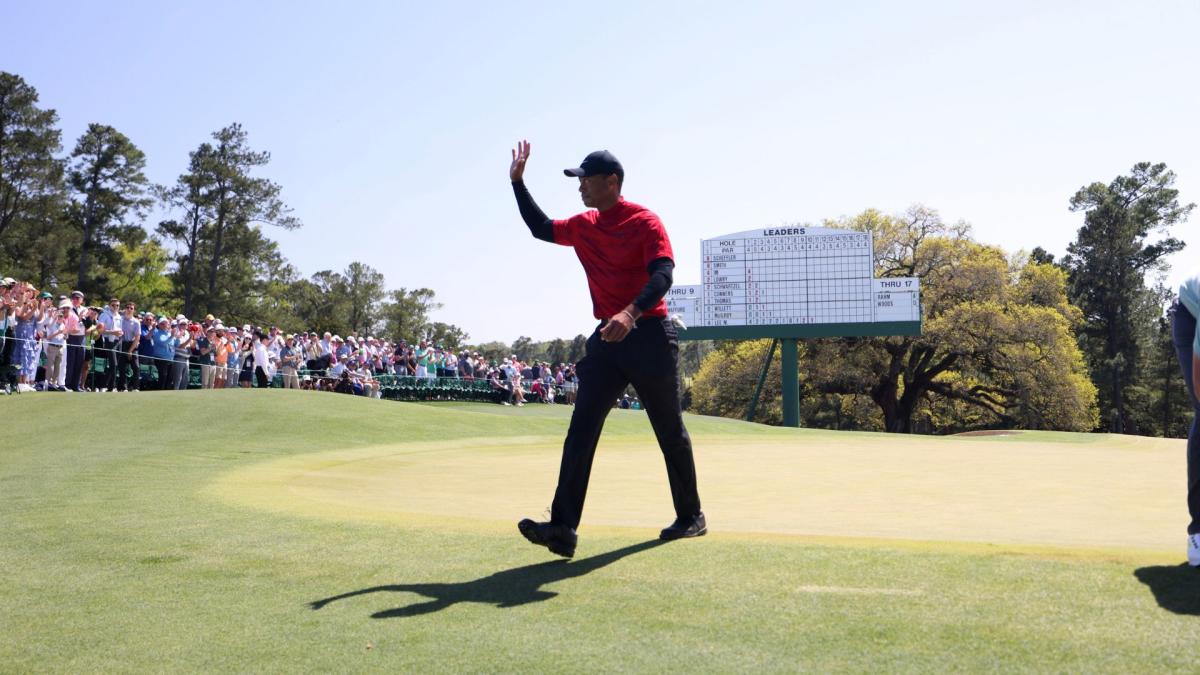 But through the bad and the ugly, there’s plenty to celebrate as we gather ’round the table this time of year and reflect.

Here are five things to be thankful for this year as a golf fan.

Be thankful golf has a whimsical new star.

South Korean Joohyung “Tom” Kim, 20, burst onto the scene this year while playing on special temporary PGA Tour membership. Needing a win at the Wyndham Championship to get into the FedExCup playoffs, Kim laughed off an opening quadruple bogey and became both the first player born in the 2000s to win on Tour and the second-youngest Tour winner since World War II. And Kim didn’t even care to look at how much his winner’s check was — just like his childhood idol, Tiger Woods.

His breakout year earned Kim a spot on the Presidents Cup’s International squad, and he stole the show Saturday at Quail Hollow, clinching a win over U.S. powerhouse duo Xander Schauffele and Patrick Cantlay. Kim walked off his winning putt and threw his hat to the ground in a Tiger-esque celebration.

“He’s been such a tremendous gift to our sport,” said International captain Trevor Immelman. “He has an ability to be a global superstar.”

And Kim was the gift that kept on giving. Two weeks after the Presidents Cup, Kim outdueled Cantlay and won the Shriners Children’s Open, becoming the first player to notch two Tour wins before his 21st birthday since Woods. Kim hopes to keep pace with his boyhood hero in his trajectory to worldwide stardom.

Be thankful two of the LPGA’s biggest stars are back at full strength.

During the 2022 season, Nelly Korda and Danielle Kang both received difficult news.

In March, Korda was diagnosed with a blood clot in her right arm, underwent surgery in April and returned to competition at the U.S. Women’s Open in June. At that event, Kang revealed she had a tumor on her spine and would be out indefinitely.

Kang returned at the CP Women’s Open in late August. A month later at the NW Arkansas Championship, she forced a playoff by holing a 40-yard chip on her 72nd hole, though she eventually fell to Atthaya Thitikul.

“What I did to get here to finish, to even contend is a win for me,” Kang said afterward.

Meanwhile, Korda had four top-10s in her first five starts back and returned to the winner’s circle — and being world No. 1 — at the Pelican Women’s Championship.

“There has been more downs than ups this year I think,” Korda said, “and I think that that’s what makes this (win) so much sweeter to me.”

Be thankful for golf’s Cinderella story of 2022.

In August 2021, Steven Alker, 18 days removed from his 50th birthday, Monday qualified for the PGA Tour Champions’ Boeing Classic and finished T-7. With the top 10, the New Zealander got into the following event and then recorded six straight top-10s before notching his maiden victory. Alker never recorded a single top-10 in 122 career PGA Tour starts.

However, Alker wasn’t a one-hit-wonder. He won four times in ’22, including the Senior PGA Championship, which propelled him to claim the tour’s season-long Charles Schwab Cup title.

“The pressure’s been on [Alker] right from the start of the year all the way through,” Padraig Harrington said. “He had a lead and several of us were catching him all year. It’s very impressive that he’s not just held on, but he’s won in style.”

Be thankful Lydia Ko is back to her dominance.

The 25-year-old won three times, secured the Vare Trophy for the second straight year and claimed the season-long Race to the CME title — but was a hair short from making history.

However, Ko is on pace to soon reach another historical feat. Her standout year put her two points away from the 27 points needed to qualify for the LPGA Hall of Fame. Inbee Park was 27 when she reached that mark in 2016, and is currently the youngest player to ever qualify.

If Ko continues her domination in 2023, we (and she) could be thankful next year about being the youngest among that esteemed LPGA group.

Be thankful for the latest Tiger Woods comeback.

In December 2015, after a series of injuries, Woods said anything else he achieves in his career would be “gravy.” Well, that gravy consists of three wins, including the 2019 Masters — and his 2022 return tour.

Woods suffered severe leg injuries in a single-car crash in February 2021 while he was recovering from his fifth back procedure. The 46-year-old will likely never play a full schedule again, however, this year he was able to tee it up on some of golf’s biggest stages. In his first competitive round back since November 2020, Woods shot 1-under 71 at the Masters en route to making the cut.

See also  At the Ryder Cup, the Fans Are Part of the Show

“I don’t think words can really describe that given where I was a little over a year ago and what my prospects were at that time to end up here and be able to play in all four rounds,” Woods said after finishing 47th. “Even a month ago I didn’t know if I could pull this off.”

He struggled a bit more in his next two starts. He made the PGA Championship cut, but withdrew after Round 3 and played the 150th Open at St. Andrews, but didn’t secure a weekend tee time. He’s slated to next play in December’s Hero World Challenge.

At times, it may have been hard to watch Woods, who was clearly compromised. However, his mini-return gave golf several more indelible Tiger moments, and at his age — injuries or not — those could be scarce, which means we’re all thankful for the memories.