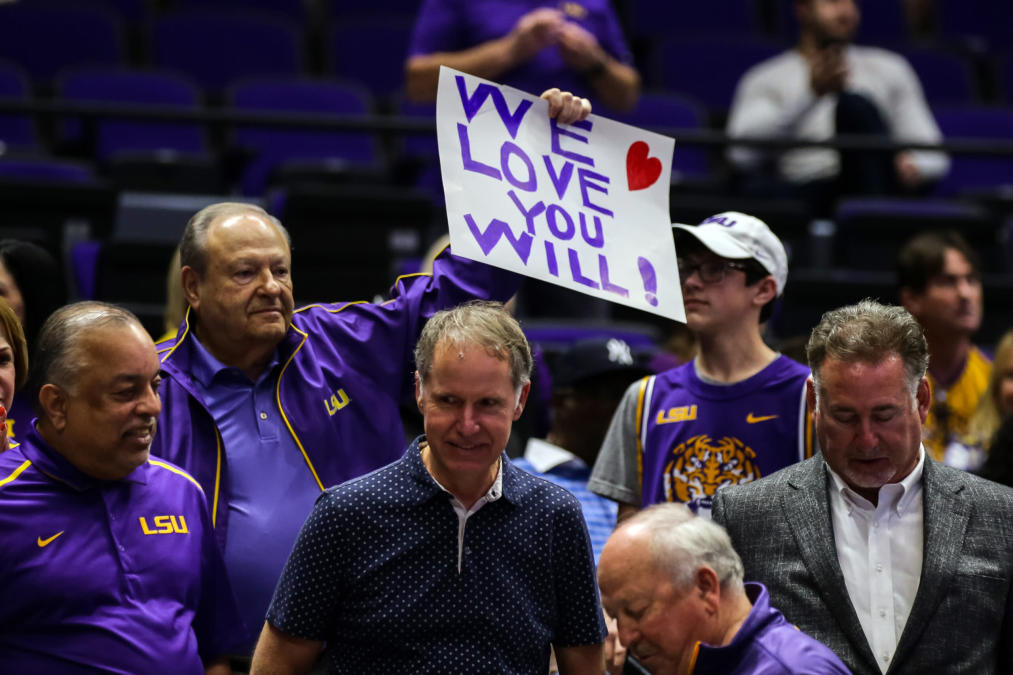 The Will Wade era at LSU is now over. After the Notice of Allegations came down last week, the program felt its position with Wade was untenable, finally ending the saga.

Wade, who got his first head coaching job at Chattanooga, came to Baton Rouge after a stint at VCU. He was hired in 2017 by then-athletic director Joe Alleva.

During his time at LSU, Wade made the team a contender in the SEC, including winning the regular-season SEC championship in 2019. If COVID hadn’t led to the cancellation of the tournament in 2020, Wade would have led LSU to four consecutive NCAA Tournament appearances for the first time since the 90s.

Despite successfully rebuilding LSU after the disappointing Johnny Jones era, Wade will not be remembered for that. There was just too much smoke for him to survive after getting wrapped up in the NCAA and FBI investigation. Everyone may have been doing it, but Wade got caught, and at least until he finds his way back onto a sideline, his name will be synonymous with how it ended for him with the Tigers.

To say the least, Wade left a mark on LSU in more ways than one. Here are five things that defined his tenure.

Wade didn’t lead LSU to any Elite Eights or Final Fours, nor did he turn it into a powerhouse. All of that is fine because what he did was make LSU fun, he made it relevant.

He took over right as the SEC was really beginning to ascend. It was no longer just a football conference but was becoming a league that would threaten the ACC and Big Ten in basketball. This season, the SEC ranked above both those leagues in KenPom.

LSU risked getting left in the dust as South Carolina was going to a Final Four and programs such as Auburn and Alabama made strides.
Wade built LSU into a program that is expected to make the NCAA Tournament every year.

If it weren’t for the canceled tournament in 2020, Wade would have put his team in every tournament from his second year on. Even when his teams weren’t in tip-top shape, he had talented groups that were enjoyable to watch and capable of beating anyone.

To some extent, this criticism uses the expectations Wade set against him. When a program tastes success, fans expect that success to keep coming. It seems Wade could never quite find that consistency.

Some of that may just be the fact that building a program into a consistent team is harder than people think. It takes years for a coach to get a school to a point where they can just reload year after year in all phases of the game.

In 2020 and 2021, LSU was a top-five offense according to KenPom, but the defense left a lot to be desired. This year, it was a top-five defense, but Wade did not have the offense to make it a complete team.

See also  A repeat in the making?

At other times, LSU could shoot, but didn’t have the size to compete. It never all gelled together to give Wade that team that could contend for the Final Four.

Will Wade’s first game against a Power Five opponent at LSU came against Michigan in 2017 during the Maui Invitational. It was not a game the Tigers were supposed to win, but it did.

LSU played with a purpose that hadn’t been seen from the program in a long, long time. That started with Wade on the sideline, who seemed to have a fire burning in his stomach the entire game. That emotion became a central part of the program under Wade, sometimes even resulting in him earning a costly technical.

Of course, it’s impossible to talk about the Wade era at LSU without talking about this. Outside of Baton Rouge, this is what Wade will be remembered for. Ever since the news of the allegations regarding payments to players from Wade broke in 2019, it became a thing that was mentioned during almost any broadcast.

Wade did not get to coach the tournament in 2019, as he was suspended indefinitely. He eventually returned as the investigation continued rather quietly. When the NOA came down last week, it got loud again, and LSU decided it had to move on.

LSU stood behind Wade as long as they felt they could. That isn’t always the case in these situations. With NIL now providing legal ways for players to be compensated, Wade could be one of the last ever names involved in an investigation such as this.

Prior to Wade, having future NBA players at LSU wasn’t that common. Sure, Johnny Jones had the Ben Simmons year and players like Shaq and Glen Davis have come through the program, but there hasn’t been much else.

From the 2019 team, Tremont Waters, Naz Reid, Javonte Smart and Skylar Mays all went on to make NBA rosters. Trendon Watford recently signed a contract with the Portland Trail Blazers after a couple of years at LSU. The biggest star of them all could end up being Cam Thomas, who’s been impressive in his first season with the Brooklyn Nets.

Wade brought an influx of talent to LSU that made the Tigers a watchable product night in and night out.