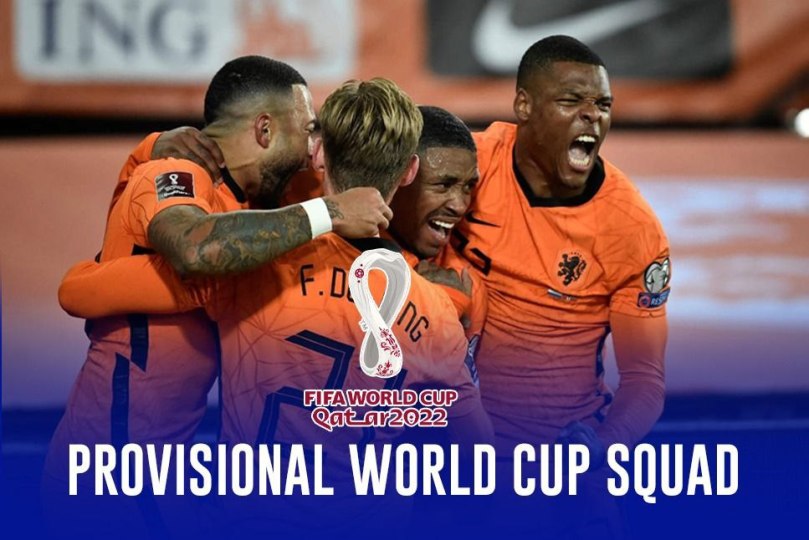 FIFA World Cup: FIFA World Cup LIVE – Netherlands have become the first nation to announce a provisional squad for the World Cup. The Men in Orange coached by Louis Van Gaal, have announced a squad comprising 39 players for the sport’s biggest spectacle set to begin in Qatar next month from November 20. Netherlands are placed in Group A at the World Cup alongside hosts Qatar, Senegal and Ecuador. Follow FIFA World Cup updates LIVE on InsideSport.IN.

FIFA World Cup: From Canada to Denmark to Wales – CHECK OUT the Top 5 UNDERDOGS at the Qatar World Cup

The Netherlands squad has a good blend of youth and experience and the Dutch will be expected to go deep into the World Cup. Some of the notable inclusions in the squad include PSG’s teenage sensation Xavi Simons, young Manchester United full-back Tyrell Malacia and Leeds United defender Pascal Struijk. Regular names like Nathan Ake, Daley Blind, Stefan de Vrij, Frenkie de Jong, Memphis Depay among other feature in the provisional squad and there are no surprising exclusions.

🦁 𝐏𝐫𝐨𝐯𝐢𝐬𝐢𝐨𝐧𝐚𝐥 𝐒𝐪𝐮𝐚𝐝: This is the longlist of 39 players where our final World Cup 2022 squad will be selected from! 📋#NothingLikeOranje | @FIFAWorldCup pic.twitter.com/5aGJMDcyVK

There are always players who are expected to feature, but miss out due to the coach’s tactics, injuries or other unforeseen circumstances and the 2022 World Cup is no different.

Such notable absentees include Roma midfielder Georginio Wijnaldum, who suffered a fractured leg in training and will consequently have to watch on from the sidelines while Manchester United mid-fielder Donny Van de Beek has been excluded for tactical reasons.

Can the Netherlands go all the way in this World Cup? –

The Netherlands are one of the biggest names in World football and surprisingly, they have never able to win football’s biggest prize. The Dutch have finished runners-up on three occasions – 1974, 1978, 2010. They also secured a third place finish in 2014 in Brazil. Fans will be hoping that this current crop of players can help the nation break this long-standing jinx.

Netherlands will be first seen in action at the World Cup on November 21 against Senegal. The Dutch will then take on Ecuador on November 25, followed by their final group stage match on November 29 against hosts, Qatar.