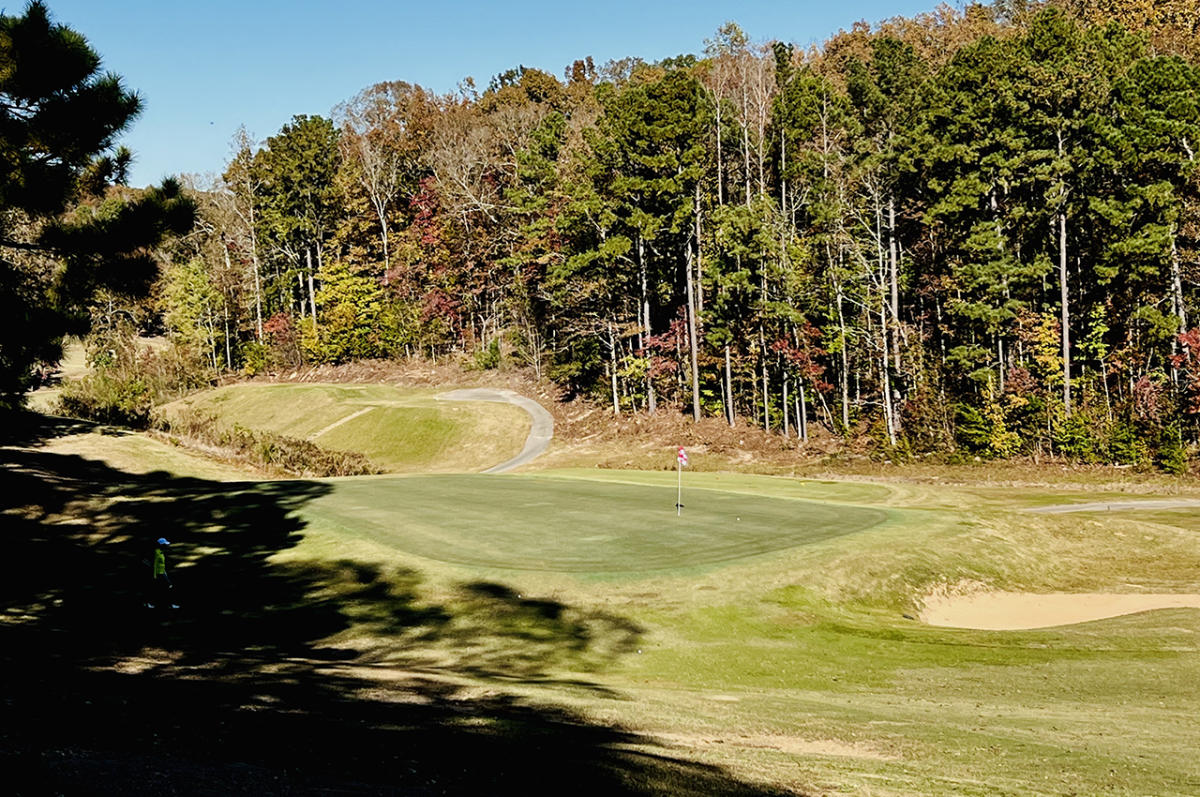 ALPINE, Ala. – Ever seen an abandoned golf course and wondered, is it still possible to play golf there? Is it salvageable? How much would it take to reopen, at what cost?

With hundreds of courses having closed in the U.S. after 2008’s market meltdown, there are plenty of such overgrown properties – including dozens of layouts by famous designers. Nothing comes from many of these properties except memories and maybe a few dreams of golf renovation.

Rarely, those dreams of resuscitating an abandoned layout become reality. It just takes the right person.

Enter Tony Parton, a former federal corrections officer living in rural Alabama. He had no plans to take over a failed course. But he loved golf – and one particular layout.

It was called Alpine Bay. The majority of Alabama golfers never heard of it, and most of the minority who knew of it never bothered to play it. They couldn’t tell you how to get there or even if it was still open.

Alpine Bay Golf Club in Alpine, Alabama, after the course was salvaged and reopened (Golfweek)

Located in east-central Alabama 44 miles east of downtown Birmingham near the southern shore of Logan Martin Lake (part of the broad Coosa River water basin), Alpine Bay Golf Club originally was planned to have two 18-hole courses. But as funds for a major resort development were lacking, only one of the two courses opened in 1972.

That course had a lot going for it: a par-72, 6,518-yard championship layout designed by Robert Trent Jones Sr., namesake of Alabama’s Robert Trent Jones Golf Trail that was built decades later. Moreover, Jones built it with assistance of his son Rees Jones, then in his early 30s, who became a prizewinning course designer and brand name in his own right, as well as young Roger Rulewich, the architect who two decades later would actually design most of the courses on the Trail.

Troubled financially from the start, Alpine Bay – with its one course and a sparse nearby population – struggled year after year to stay in business. Although a beautiful layout in a brilliant natural setting, Alpine Bay was hard to reach even from Birmingham, with at least part of the drive on winding, lonely two-lane roads. After barely managing to stay alive for decades, it was shuttered in 2014.

The closing of Alpine Bay caused hardly a ripple in the golf world, even in Alabama. But the place had built a loyal following. Namely, Tony Parton. And Alpine Bay’s closure did not end Parton’s love affair with the layout. One summer evening in 2016, he and his wife, Jan, took a walk along the abandoned course.

“When we got to what had been the eighth green [a par 3 over a small lake],” he remembers, “we were shocked at the abysmal condition of the course. It was all grown over, just terrible, with weeds and wild plants growing waist-high and the original grass all but dead.”

The Partons committed themselves to pulling up the worst of the weeds on just the one green. “We came back several nights in a row, working to uncover what was left of the golf course we loved.”

During one of their first trips to the abandoned layout, Tony got a phone call from his friend Mark Calhoun, also a previous regular at the golf course. “Mark asked where I was,” Parton remembers. “I said, ‘You’ll never believe me, but I’m at Alpine.’ ”

Calhoun got in his pickup truck and drove right out to the spot where Tony was power-mowing weeds and grass. “Mark and I took a close look at what had been the green, trying to figure out what we could do about it,” Parton said. When the tall grass on the former green was mown to a reasonable length, they realized, “There was hope for this course.”

The 144-acre property that was the golf course, practice range, putting green and small clubhouse had been for sale for months. Parton quickly called the realtor and made an offer. The price tag was $144,000. The process took only a few months. By early 2017, Parton, then retired from the federal prison system, put together enough money to take over the course.

Buying Alpine Bay was one thing, but getting it ready for golfers was something else. The next step in the process was to get more people on board. With Calhoun’s help, Parton established Alpine Group LLC. A handful of investors boosted the value of the limited liability company to $520,000. Still not much to run a golf course.

It took five months of diligent restoration and backbreaking work to get the course ready for play. “No words can describe the emotions of watching golfers tee off at the course for the first time,” Parton said.

In the 12 months following its reopening in the summer of 2017, the semiprivate Alpine Bay Golf Club acquired 60 members. Today it is home to just more than twice that many, virtually all of them from the surrounding communities of Lincoln, St. Clair, Vincent, Coosa Pines, Harpersville, Childersburg, and Talladega. Right at 15,000 rounds have been played on the course each of the past two years, with peak green fees reaching just $46 on weekends and holidays.

Still, Alpine Bay is the Rodney Dangerfield of Alabama golf – it gets no respect. Rarely does anyone from Birmingham, Montgomery or Huntsville make the drive to play. Most golfers in the state still have never heard of Alpine Bay, and those who have heard of it dismiss Alpine Bay as no longer in business or not worth playing.

To demonstrate the long-forgotten and ignored virtues of the Alpine Bay golf course, Golfweek included a day at Alpine Bay in its 2021 Architectural Summit near Birmingham honoring the legacy of Robert Trent Jones Sr. The summit was attended by 44 of Golfweek Best’s course raters. By and large, the raters, who came from as far away as Northern Ireland, found Alpine Bay more than deserving of their visit. The course’s conditioning still needed substantial work, but the bones of the course are outstanding. In many respects, it is a truer example of a classic Robert Trent Jones Sr. layout than any of the courses on the Trail.

Putting in a special appearance that day was Robert Trent Jones Jr., the eldest son of Trent Sr., along with Jr.’s own son, Trent, the chief operating officer of Robert Trent Jones II, Inc.  This was the first time for either Jones Jr. or Trent to visit the course that Jones Sr. had designed a half-century earlier.

As Jones Jr. went around the course with Parton, he was constantly reminded of the characteristics that were typical of his father’s designs. In an impromptu talk after the round, he said that Alpine Bay “deserved a much better fate than it has gotten, so far.”

Truth is, if made a part of the Robert Trent Jones Trail – and updated and refined accordingly – Alpine Bay could become one of the more remarkable and unique golfing destinations in the state of Alabama.

But perhaps it is better to keep it as the neglected hidden treasure that it is –the way Parton has loved it.