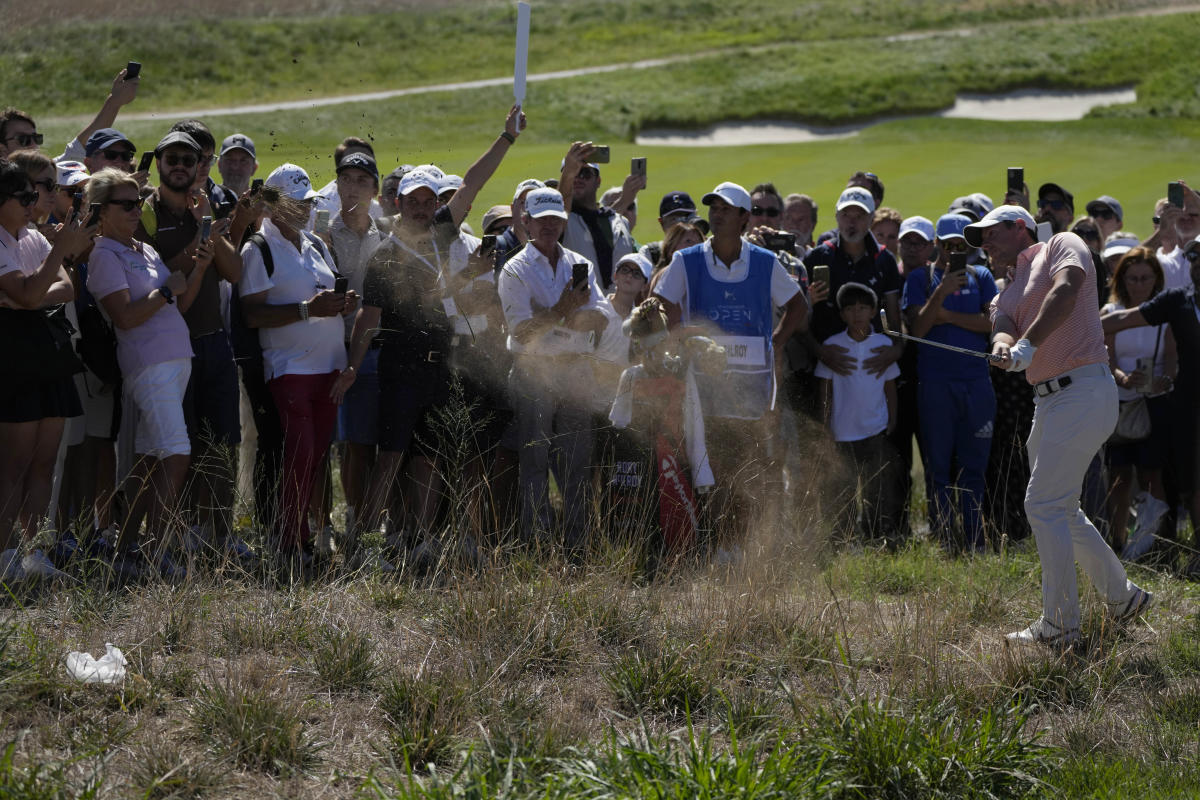 GUIDONIA MONTECELIO, Italy (AP) — Rory McIlroy likened it to landing in a “jungle” when his drives veered off line. Europe captain Luke Donald pointed to the thickness of the grass blades. U.S. Open champion Matt Fitzpatrick said the rough was simply “penal.”

If there was one major takeaway from the just-concluded Italian Open at the Marco Simone club outside Rome that will host next year’s Ryder Cup, it was that the course is being set up to reward accurate tee shots with narrow fairways surrounded by nasty rough and even higher grass beyond.

Coming off a record loss to the United States at Whistling Straits last year, Donald is enlisting the help of the golf course to try to reduce the gap to the big-hitting Americans.

“We certainly want to put a premium on getting the ball in the fairway,” Donald told The Associated Press after Sunday’s final round, confirming plans to narrow the fairways even further.

“It’s not going to be any narrower than a U.S. Open or anything like that — I think there’s plenty of width out here,” he said. “But some of (the holes) have a little bit too much width in areas. So if you want to take and hit driver, you can, but it’s going to narrow up.”

At Whistling Straits, where the Americans won 19-9 for the biggest margin of victory since continental Europe became part of the Ryder Cup in 1979, the rough was trimmed to a maximum of four inches.

By contrast, some of the high grass at Marco Simone reached up past players’ knees.

“I think the tougher the test, the better it is for us,” said Europe vice captain Edoardo Molinari, the team’s analytics expert.

Added McIlroy: “If you get it going off line here off the tee it’s very, very difficult. The rough is incredibly thick and there’s sort of jungle outside of that if you get a play way off line.”

“(The Americans) are very good from 150 in, so try to set the golf course up so it’s a challenge to get your tee shots within that range,” McIlroy said. “By forcing people to play more conservative off the tee, I think that helps the Europeans a little bit.”

It wasn’t just the rough that provided a challenge. Changing weather each day brought heat, rain and wind before Sunday’s near-perfect conditions.

“Some of these guys who are likely to be in the Ryder Cup team next year would have seen everything this week,” said Donald, who took over the captain’s duties from Henrik Stenson last month after the Swede was stripped of the honor for joining the Saudi-backed breakaway LIV Golf circuit. “That’s good that they’ll be very prepared.”

None of the likely Ryder Cup members for the U.S. team showed up.

Donald himself, who finished 13 strokes behind surprise winner Bob MacIntyre, learned a few lessons himself when he hit the wrong ball after a poor tee shot on the driveable par-4 16th on Friday and then lost a ball in a tree on 13 on Sunday.

See also  Max Homa holes clutch putts, celebrates with fist pumps like he never has before

“I had a adventurous week,” he said.

McIlroy, who finished two strokes back in fourth, fell out of contention Sunday when he hit into the water on 16.

Fitzpatrick, who lost in a playoff to MacIntyre, was on course for victory until he found the rough on the par-3 17th and bogeyed the penultimate hole for the third time in four tries.

Fitzpatrick then again drove into the rough on the first playoff hole, enabling MacIntyre to snatch his first win in nearly two years — and only the second of his career.

A smooth-swinging Scot from the whisky town of Oban, MacIntyre plodded his way around the hilly course by consistently hitting the greens — never anything too spectacular — and recorded the lowest round of the week on Sunday with a 7-under 64.

“For me, it’s pretty simple. If you hit it where you aim, you’ll do alright,” the 26-year-old lefty said. “Thankfully today for the majority of it, I aimed it well, I hit it all right and the putter worked.”

MacIntyre’s performance in the second week of the Ryder Cup qualification period may have given him a spot on next year’s team.

“I played with Bob last week in Wentworth,” Donald said. “Looks like a strong player, a strong mind — he looks very fearless on the golf course, which you’ll need in a Ryder Cup. It’s a pressure packed situation.”

See also  OLIVER HOLT: Rory McIlroy is fighting against the Saudi millions to save golf's soul

On the eve of the tournament, Donald and many of Europe’s top players like McIlroy, Fitzpatrick, Viktor Hovland, Tyrrell Hatton and Francesco Molinari ate dinner together.

“We obviously play a very individual sport most of the time. But one week out of every two years, we try and come together as a team and unite,” Donald said. “And having those dinners helps with that.”

Edoardo Molinari said the menu included “pasta, prosciutto and mozzarella” and that “nearly everyone enjoyed a glass of wine.”

Donald hopes more elite players will check out Marco Simone in May when the next Italian Open is contested.

“As many eyeballs or potential players come over and get a feel for this place, the better,” he said. “I know the schedule is tough and it’s busy and jam packed, but I’ll certainly be encouraging them to try and make the trip.”

Andrew Dampf is at https://twitter.com/AndrewDampf