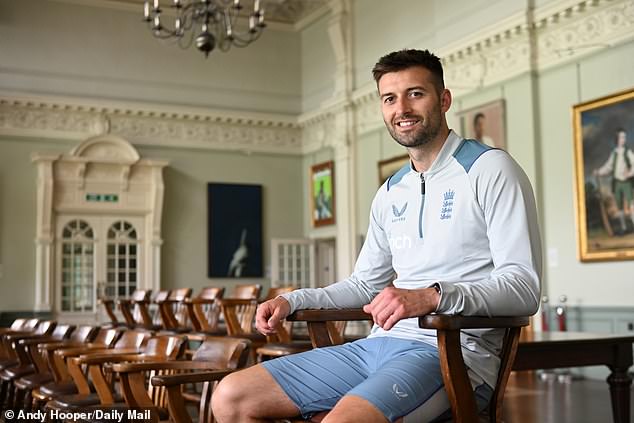 You probably think you know Mark Wood. He is the lad from Ashington made good, the England fast bowler with the imaginary horse, the extrovert whose innate cheek has helped him cope with a career ravaged by injury.

He is all those things, for sure, even if the horse has long since been put out of its virtual misery. But at his core is a likeable contradiction. One moment in The Wood Life he is laughing about the time he almost scythed off a toe with a lawnmower. The next, he recounts a severe panic attack on a flight to Amsterdam. He can play the fool, and just as easily be crippled by anxiety.

It almost goes without saying that this is no conventional autobiography. Wood does not do convention: he is teetotal, survives for weeks on tour eating only margherita pizza and wears goggles for chopping onions. He is a jester with a twist.

Mark Wood is a likeable contradiction – he can play the fool, and also be crippled by anxiety

And while the book — written with the deft assistance of ESPNcricinfo journalist Vithushan Ehantharajah — is divided into ‘How to…’ chapters, from ‘How to celebrate’ to ‘How to love’, Wood is honest about its value for those in search of profundity. ‘Perhaps this is more of a not-so-helpful self-help book,’ he writes, with trademark self-deprecation.

Told he comes across on the page as a normal bloke, he sounds chuffed. And yet, in other ways, he is anything but. Wood is one of the fastest bowlers in the game. He is a World Cup winner. And he has Test match five-fors in some of cricket’s most far-flung corners: St Lucia, Johannesburg, Hobart.

He is also habitually injured, though after elbow surgery he hopes to play a part in the latter stages of England’s T20 series in Pakistan, starting next week, and he is excited about a busy winter: a T20 World Cup in Australia, Test series in Pakistan and New Zealand, white-ball assignments in South Africa and Bangladesh. 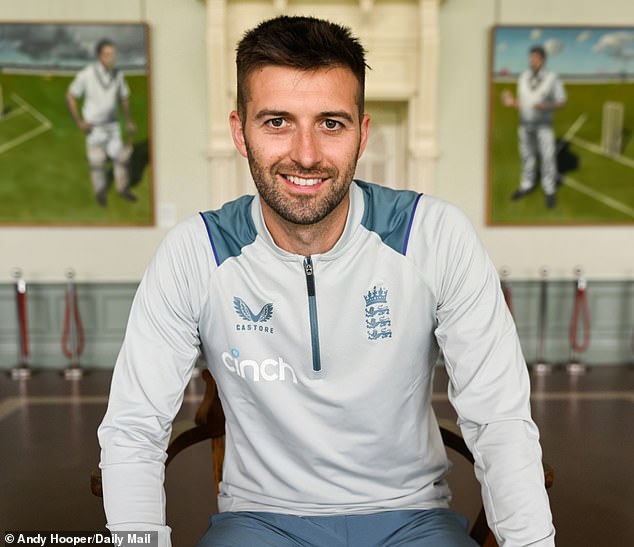 Still, the long absences, the many operations, the periods of rehab — these are all indelibly part of his story. Since his debut in 2015, he has appeared in only 26 of England’s 100 Tests. It is why the good times feel especially sweet.

‘If I didn’t have them, I probably wouldn’t have played as much as I have,’ he tells Sportsmail. ‘England might have looked elsewhere. For myself, mentally, I might have said: ‘Look, I don’t know if I can keep doing this’. I wasn’t living up to the potential I thought I had.’

The self-belief is certainly there, and he loves the day job: ‘When everything’s right, bowling fast is an awesome feeling. It feels like you’re flying, like a power surge. On a good day, you feel like you and the batter have a telepathy with each other, like ‘I’m coming for you here’.’

Sometimes, he daydreams about his favourite spells, and he is particularly fond of a delivery that produced an involuntary twitch from West Indies’ Shimron Hetmyer during a lightning spell in St Lucia in early 2019. ‘It was a bouncy wicket and the slips were miles back. The way the edge went … it seemed to fly.’

At the same time, part of Wood seems endearingly starstruck by the world his career has opened up. He has played with England’s two greatest bowlers — Jimmy Anderson and Stuart Broad — and earned praise from opponents. 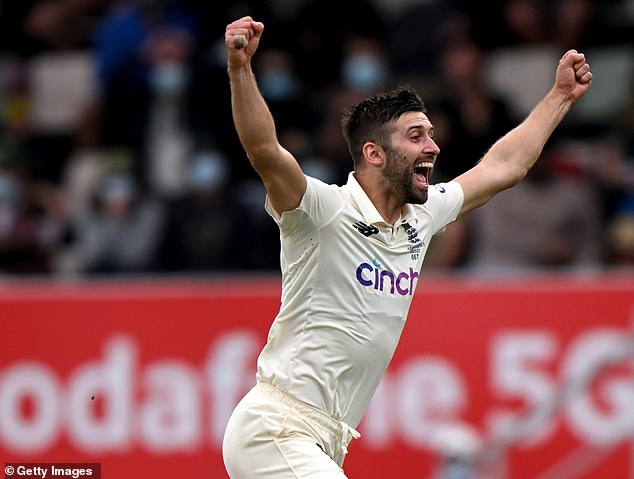 ‘I was doing some catches on the boundary at Adelaide over the winter and Brett Lee came over and he was like, ‘Well done at Brisbane’. I texted my mate straight away and said, ‘Brett Lee came up to me’, as we used to pretend to be Brett in the garden. He texted back and said: ‘I cannae believe you’re actually speaking to these people’.’

In the book, he recalls an unplayable ball to dismiss Usman Khawaja at Hobart in January. That night, he got into the hotel lift with Australia’s coach Justin Langer, who said: ‘Woah, that bouncer was a brute, wasn’t it?’ These are the stories that keep him going, and England believing. Ben Stokes is a big fan, and was the team-mate who encouraged him to go short in Hobart, where Wood finished with a career-best six for 37. Moments like that have given him a taste for more. 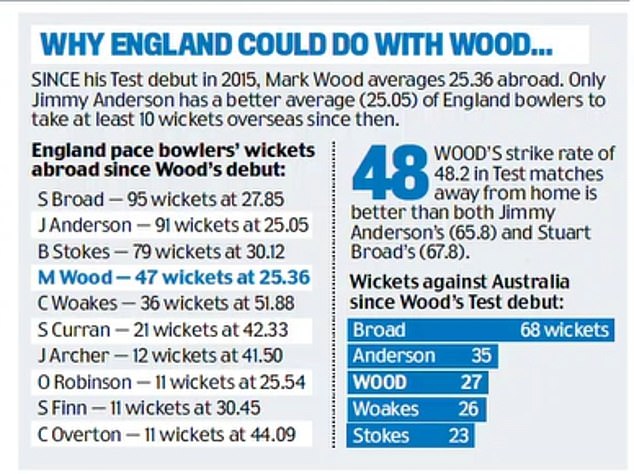 ‘I’m getting to that age where I don’t want to look back and think about the games I’ve missed,’ he says. ‘I want to be able to say: ‘Look, this is how many times I played for England. And I give my all every time I played’.’

His commitment is total, but expectation can bring anxiety. Wood reaches for an analogy he picked up from a psychologist. ‘If you’ve got a jug full of water, and you add rocks, the water level will go up, and that was like stress for me. The rocks could be missing your family. It could be injury, planes, or worrying about food. If you’re adding them, the water is going to get higher, to the point where it spills over. That’s when the anxiety kicks in.’

He has learned to replace negative thoughts with positive ones, and is conscious his body language needs work. But because of the injury-enforced hiatuses, he says he feels young for his age: he turns 33 in January. A long- standing ankle problem seems to have been resolved, and he is optimistic about the years ahead.

‘I’m probably in the best bit of my career,’ he says. ‘Most people talk about their best period being in their late 20s. I feel like now is my best bit because I’m fresh: I haven’t gotten much under my belt, and I was a late developer.’

With three Tests in Pakistan starting in December, Wood hopes his skiddy pace and low trajectory will prove useful on surfaces that can encourage reverse swing. Those qualities help explain why his Test record overseas (47 wickets at 25) is better than at home (35 at 40) — and why he believes he still has work to do to become a permanent member of England’s attack. 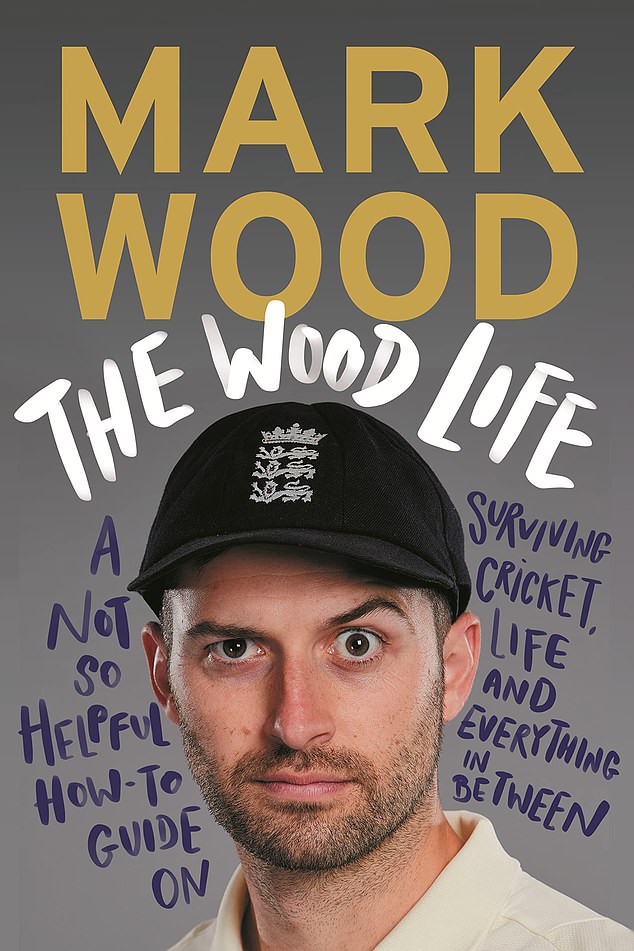 Wood’s new autobiography, titled ‘The Wood Life’, is divided into ‘How to…’ chapters

‘If I’m not bowling 90mph, there are 15 or 20 bowlers better than me bowling at 80mph. If I can move the ball, that’ll make me more effective in England. At the minute, I probably don’t move it enough or I’m not accurate enough, so that’s what I need to improve.’

Then again, like Bobby and Jack Charlton, Wood is a World Cup winner from Ashington — which is more than can be said for the other England quick to emerge from this Northumberland town, Steve Harmison. ‘That’s the only thing I’ll ever have over Harmy,’ says Wood. ‘He’s got the wickets, the pace, the height, he’s the Lord Protector of the North. He’s Ashington’s No1. He was the original Ashington Express, I’m the Ashington choo-choo train.’

If he can proceed full steam ahead for the next few years, there may even be material for another book.