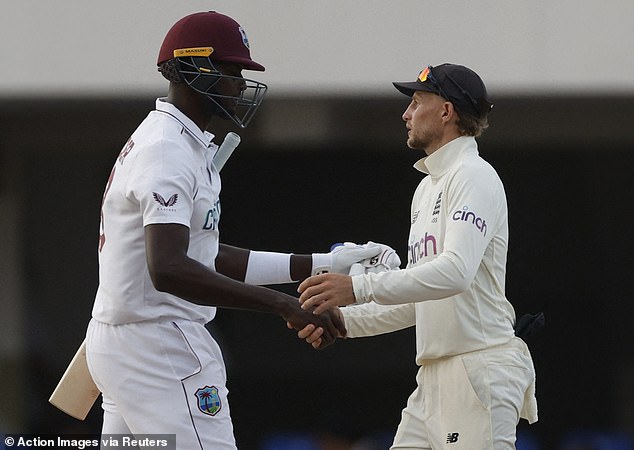 Jason Holder on Tuesday joined his West Indies team-mate Carlos Brathwaite in condemning England’s approach to the closing stages of the first Test.

Brathwaite caused eyebrows to be raised when he said on BT that England had been ‘disrespectful’ in refusing to shake hands on a draw until, with five balls left in Antigua and six wickets remaining, it was impossible to force an unlikely victory.

And former West Indies captain Holder, who was at the crease while Joe Root took the match to the bitter end, lent his weight to the argument by supporting Brathwaite.

‘I thought they went on way too long,’ Holder told Sportsmail. ‘I know what Carlos said and it would be wrong to say I disagree.

‘When we went into the last hour I told Nkrumah Bonner that if we batted for five more overs they would probably call it. So I was really surprised they went on.’

But Holder, back on his home ground where he made a double hundred in West Indies’ emphatic victory over England three years ago, believes Root’s tactics could play into West Indies hands in Wednesday’s second Test.

‘In a sense I didn’t mind because it gave the English team more overs in their legs,’ said Holder. 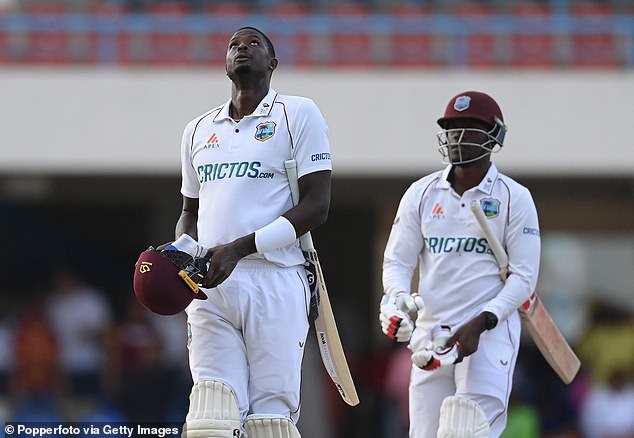 ‘Stokesey was running in and putting in a really big effort. I look at the positives in any situation and the positive for me was that the English lads were on their feet and had to bowl a lot longer. They had to toil a lot longer.

‘It would be good if we could put them back in the field for that length of time again now.

‘They fielded for more than 150 overs in the first innings and then they stretched it longer than I thought they would in the second.’

But Holder did admit Root was entitled to do what he did.

‘With what has happened to English cricket over the last few weeks it was not a surprise they would give themselves their best chance of winning it. Joe was within his rights.’ 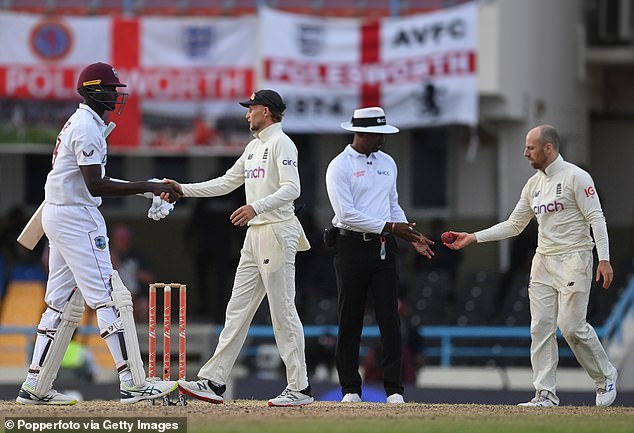 However, Holder admitted that England captain Joe Root (second left) was entitled to hold out

The England captain has been taken aback by the suggestion he disrespected West Indies and on Tuesday insisted he would do the same thing again.

‘I didn’t consider shaking hands before we did,’ said Root. ‘I’ve seen the comments and I think it’s slightly unfair to say that.

‘I have a huge amount of respect for every team we play against and we want to give ourselves every opportunity to win the game. 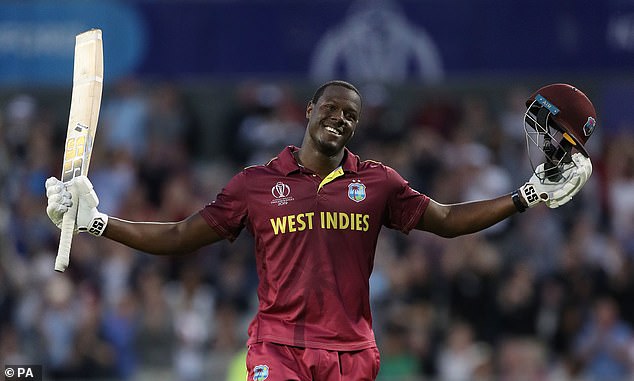 ‘It was also a chance for us to open up wounds for the rest of the series and in this instance it was a opportunity for Jack Leach to try to get four or five wickets. I don’t think there was anything wrong with our approach at all.’

But Holder believes West Indies have been handed added motivation for the last two Tests as they attempt to extend their formidable home record against England.

‘We are up for the challenge,’ he added. ‘You saw the way Nkrumah batted in the entire Test.

‘His game is built around time spent at the wicket and if they want to stay in the field for excessive amounts of time that’s up to them.

See also  David Warner out for 95 - Twitter relishes it

‘We’ve just got to focus on what we need to do. We’re a team in in transition too and we just need to execute.’

BT Sport is broadcasting England’s tour of West Indies. Watch the action from the second Test exclusively live on BT Sport 1 from 1pm on Wednesday.