Eddie Howe surveyed the packed media room at St James’ Park and decided an apology was in order. “Please excuse the voice,” said Newcastle United’s new manager. “It’s not quite at the normal pitch but I’ve done a lot of shouting in the last two days.”

In truth Howe sounded only the tiniest bit hoarse yet his words drew smiles from an audience well aware that Steve Bruce’s successor had spent much of the previous 48 hours drilling a set of players still to win a game this season.

Although the former Bournemouth manager emphasised that the response from his new charges was “outstanding”, he is certainly not underplaying the task confronting him at the club 19th in England’s top division.

“Success now is staying in the Premier League; it’s going to be a real challenge,” said the 43-year-old. “I’m not underestimating it.” Someone inquired whether he had accepted football’s toughest posting. “I’m sure there are plenty of managers around the world who would put their hands up for that. But, OK, if you’re narrowing it down to English football, it’s not an easy job.”

The attendant pressure is exacerbated by Newcastle’s recent Saudi Arabian-led takeover. It leaves Howe as chief football choreographer at arguably the world’s richest club during a period when the Championship is considerably closer than Europe.

Then there is the awkward issue of Saudi Arabia’s appalling human rights record. How did Howe reconcile his reportedly high principles to taking the Saudi riyal? Had morals been compromised? A less eloquent speaker might have stuttered and stumbled but Newcastle’s impressively articulate manager barely broke verbal stride.

“For me it was a football decision,” he said. “I’m absolutely delighted to be here. My focus is football – that’s all I’m going to concern myself with. I’ll give everything to the job, every single day. But success is going to take a lot of hard work, a lot of sacrifice and a lot of suffering from everyone here.”

If managing Newcastle is a high-risk role, it also promises immense rewards. “It’s an incredible moment in my life,” acknowledged Howe. “It feels fantastic; I’m incredibly privileged. Everything just feels right: the club’s potential, the size, the history, the owners. I’ve been very, very impressed with the new owners and their vision. To come to St James’ Park for the first time as manager of Newcastle is an amazing feeling.”

After leading Bournemouth from League Two to the Premier League and keeping them there for five years before departing after relegation in 2020, Howe deliberately took a year off.

“I really felt the pressure I’d been living every day,” he said. “I wanted to reset, recharge, commit to my family for a period of time, further my football education and come back better. It was important to take myself into a different place mentally. I feel refreshed and energised.”

Howe will endeavour to retain that work/life balance by relocating to Tyneside with his wife and sons. “My family are excited about moving,” he said. “It’s so, so important to commit to the area. And, with the hours I need to work here, I’d never see them otherwise!”

“The level of interest is a new experience for me but I’ll buy into that culture,” he said. “It’s a much … a very different club to Bournemouth. The amount of pressure will be different and I’ll have to handle what comes my way. I’m sure there’ll be some uncomfortable moments but I’ll always keep my dignity and respect.”

Howe retained a certain circumspection, his reserve embracing not merely human rights but the January transfer window. “The last thing I want to talk about is January,” he said. “There are so many difficult games between now and then; I want to get the best out of the players we have here now.”

A man who confessed to “digitalising my training sessions” during his sabbatical appeared much happier discussing football philosophy and waxed lyrical about the enjoyment he derived from watching Kevin Keegan’s famous Newcastle “entertainers” in the 1990s. “I’d love to emulate some of their incredible attacking football,” Howe said. “That was a beautiful team to watch; I’d love to give the crowd some similarly special memories.”

First he must accomplish the tricky task of weaning Newcastle off their longstanding, apparently default cagey, counterattacking style.

“My Bournemouth teams always tried to be on the front foot,” he said. “And I’m not going to come here and be a different manager. It’ll take gradual steps but my training will certainly be very different and, ultimately, I want to see the type of football that entertains. I think that’s what Newcastle fans want too.” 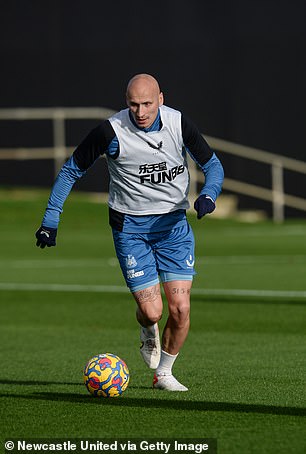