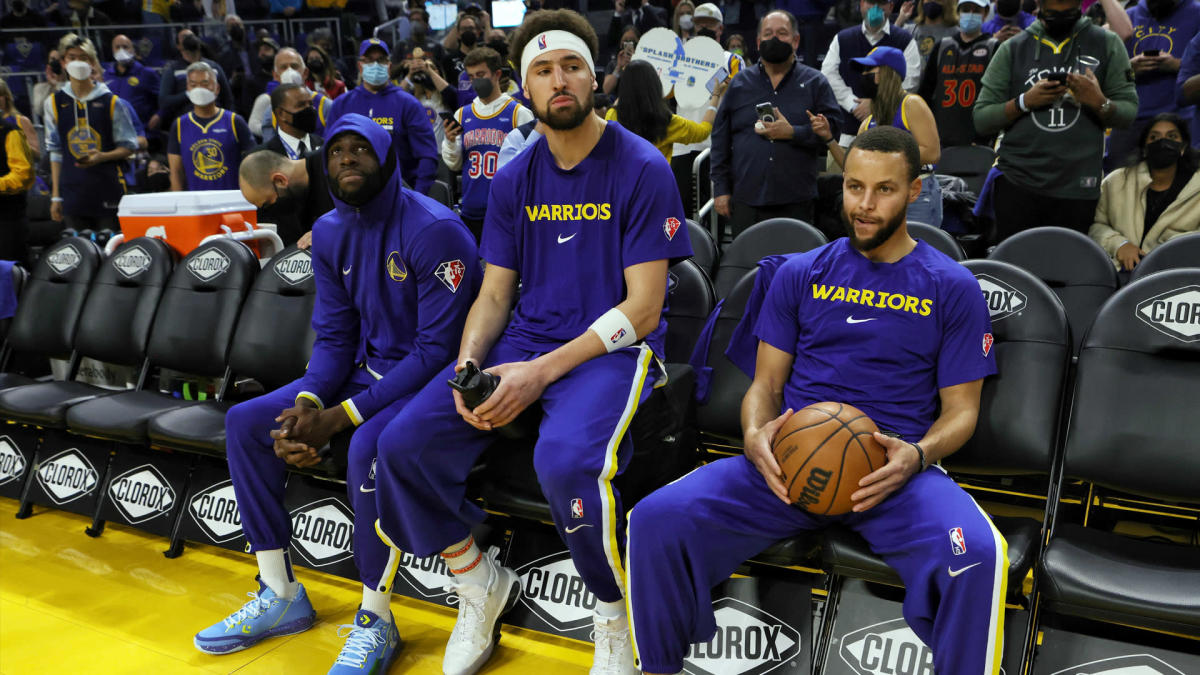 Kevin Durant joined Steve Kerr, Warriors owner Joe Lacob and others within Golden State’s organization at the franchise’s Chase Center ground-breaking event in January of 2017. Nearly two yeras later in November of 2018, he wore a hard hat, safety goggles and a neon construction vest with a Warriors logo over the right side of his chest and a Chase Center logo over his heart.

Durant never wore a Warriors uniform in their new home.

Klay Thompson finally did on Jan. 9 of this year, completing his two and half year comeback from two different season-ending leg injuries. Even with his return, though, the Warriors weren’t whole. Draymond Green sustained an injury before the game that first was thought to be in his calf but later was revealed as a disc/back issue that has kept him out for more than two months.

Green shared the floor with his longtime teammate for seven seconds against the Cleveland Cavaliers to show his support for Klay. On Monday night against the Washington Wizards, the wait finally will actually be over.

After 1,005 days without playing together, the Warriors’ original Big Three of Steph Curry, Thompson and Green will be running the show in San Francisco.

“I’m very excited,” Green said Monday to the media after Warriors shootaround. “I was looking forward to this day for a long time a couple months ago. Just to take the court again with those guys, those two guys in particular — I always say, like, we built this thing.

“With Andre [Iguodala], who came here my second year, we built this thing from ground zero.”

The season before the Warriors selected Green in the second round of the 2012 NBA Draft, Golden State won only 23 games. The Warriors immediately went to the playoffs in his rookie year after a five-year layoff. With those three healthy, they have never missed the playoffs. Not once.

The truth is, there is no Durant era on the Warriors without Steph, Klay and Draymond. There’s no Iguodala in the Bay Area without those three, too. The same goes with Chase Center, the Warriors’ $1.4 billion home that opened during the 2019-20 pandemic-shortened season.

“To take the floor with those guys, especially after all the nonsense of ‘this dynasty is over’ and all the s–t that came with it, I’m extremely excited,” Green said. “With those two guys in particular, it’s a little different meaning.”

Green originally targeted March 12 as a return date. At the start of the NBA All-Star break, Green headed down to Cabo San Lucas for vacation before fulfilling his TNT duties in Cleveland. This wasn’t a normal vacation, however, and the Warriors made sure a special guest joined Draymond.

Rick Celebrini, the Warriors’ director of sports medicine and performance, was on hand with Green and put him through two-a-day workouts, when most players are taking a needed break. For how odd the vacation itinerary was, Green called the experience “incredible.” It was Celebrini’s idea to first circle March 12 on the calendar before a few obstacles got in the way.

See also  John Wall to opt in (as expected)

Even Draymond admittedly saw the 12th as a bold date. It also gave him something to really strive for.

“To be 100 percent honest with you, at the time when he said the 12th — man, I could still barely push off,” Green said. “But it gave me that end date. It gave me something to say, ‘OK, I need to be ready by this day.

“I think mentally, it helped push me there.”

Traveling with the Warriors and going back and forth from the Bay to wherever the Warriors were bumped Green back two days. Steve Kerr didn’t even fully know Draymond set a date for March 14, even telling the media the Warriors didn’t have a return day scheduled — that is, until Green himself shared the news in a preview clip of his latest podcast episode on March 7.

Before dealing with the injury, Draymond was playing his best basketball in years. He’s the key that revs up the ignition for the Warriors’ offense and defense, something that they have missed in his absence. In his first 33 games, Green was averaging just under 30 minutes per game. That won’t be the case come Monday night against the Wizards.

It’s no surprise that Green despises minutes restrictions in most cases. He says he’s inviting one for now, and should play around 20 to 23 minutes in his first game back. That sure sounds better than seven seconds. His goal is to feel as close as possible to full strength a week or so before the playoffs begin, with a fourth championship ring at the front of his mind.

Over their 75-year history, the Warriors have retired six jersey numbers. Durant’s No. 35 will one day officially be off-limits, and the same likely will be true with Iguodala’s No. 9. But everything starts with No. 30, No. 11 and No. 23.

“Just seeing the joy that they play with together,” Kevon Looney said Monday when asked what he’s looking forward to most in watching Green play again with Curry and Thompson. “… To play on the Chase floor, it’ll be their first time playing at Chase together — it’s a lot of firsts for them and it’s going to be a lot of fun.

“Everybody’s excited about it.”

The Warriors are, and forever will be, Steph, Klay and Draymond. That trio will last a lifetime, and a whole lot of people can thank them for opening the doors of Chase Center.